Home » always much more about the wine - primitivo wine bistro

i love primitivo, a neighborhood wine bistro on abbot kinney in venice. however, though i love the restaurant, i can’t say that i always love the food. what are billed as "tapas" are not authentic spanish, but rather mediterranean-influenced small plates. for me, and i suspect for many others, primitivo is much more about the wine, and a little less about the food. frankly, the dishes don’t need to be outstanding, as they simply serve as sober punctuation in a long string of glass after glass of wine. pace yourself, you lush, and have a bite of something, else you wake up tomorrow morning with a raging headache.

it was a quite a chaotic scene when we drove up. with joe’s restaurant and lilly’s french cafe flanking primitivo’s tiny storefront, and one valet serving all three restaurants, there was a line at least four cars long. the less desirable alternative was street parking on abbot kinney, so we waited. and waited. by the time we got inside, we were 15 minutes late for our reservation.

and thank god we had a reservation, for the place was so packed that we ducked past people waiting for tables who had spilled out onto the front sidewalk from the non-existent waiting area inside. apparently, word about primitivo has spread like butter on a hot baguette. even with our reservation, we waited another 15 minutes, ample time for me to scan the wine list for a sicilian red for wine blogging wednesday no.8. the front and back cover are made of thick brass, adding unneccessary weight to an already heavy wine list. pages and pages of new and old world wines, categorized by country and color, offering bottles, half bottles and glasses. by no means is it of valentino level, but primitivo’s wine list can hold its own. what luck, what luck! i saw the only sicilian, 2003 morgante nero d’avola, and snapped the book shut.

after sashaying through the dark, crowded dining room checking on table status, the hostess returned. she has a lithe body, seemingly the result of hours spent in a yoga studio (this is venice after all), and is able to stretch and contort her svelte self to glide effortlessly between precariously positioned tables. we follow her on a convoluted path back through the dining room. we trouble avoiding hurried servers and maneuvering through narrow spaces. in an almost embarassing moment of harassment, i rub against a server bent over a table taking an order. *excuse me*

thirty minutes after our appointed reservation time, and we finally sat down against the wall at a tiny table, hardly a large enough space for even one person. perhaps this is the way primitivo is managing to keep up with their increasing popularity – add tables by shrinking them to postage stamps, and squeeze more people around each one. cozy? no. i call it crowded, both around the table, and on the table. with the basket of bread, the tiny cup of olivade, a bottle of water, a bottle of wine, a centerpiece and candle...i didn’t know if there would be room for any food.

the menu at primitivo has gotten longer, with the sommelier’s thoughtful wine pairing suggestions for each item. we paid no attention as we had the bottle of the nero d’avola. six cold tapas range from $5 for olives to $15 for cheese-y, antipasto-y things. there are a dozen and a half hot tapas, a selection of salads, and a few entrees, including a paella for $15. to add to an already overwhelming offering, there are about a half dozen specials on a separate sheet. i decided not to pick any of the food items, and let whatever come my way be an adventure. besides, i was working on my first glass of wine.

as crowded as it was, the three things we ordered from the regular menu came out pretty quickly. so much for pacing our meal. prosciutto wrapped dates, dried figs, and manchego cheese were a good start. a fragile garden of greens and flowers held up a miniature leaning tower of manchego cheese. i dismissed the greens as a garnish, along with a few almonds and walnuts scattered around the edge of the plate, and knocked over the manchego for a bite. mmm. anything wrapped in prosciutto is always good, though i wished there had been a little more to balance the uber-sweetness of particularly fat dates.

there are some things i order no matter what if it’s available on a menu. the first time i ever had salt cod brandade was with some chef-ie friends of mine at lucques. when it was suggested, and subsequently described to me, i was pretty sure i wasn’t going to like it. i loved it. ever since then, if it’s available on a menu, i order it. it’s just not something i would ever make at home – who has time to soak a salted, dried cod in milk over the course of several days?!? primitivo calls it a baked salt cod puree with potato, and serves it with a lemon aioli and crostini. perhaps the word “brandade” would invite too many questions. the lemon aioli looked like an egg yolk, a perfect, flattened dome resting in the center of a circle of baked puree. i didn’t bother with the crostini. i just took my fork, plunged right in, and took a bite of the cod. it was salty, creamy, with a delicate crisp from perhaps panko bread crumbs. i wanted to pull the whole plate toward me and eat it all myself. this was the best dish of the night. 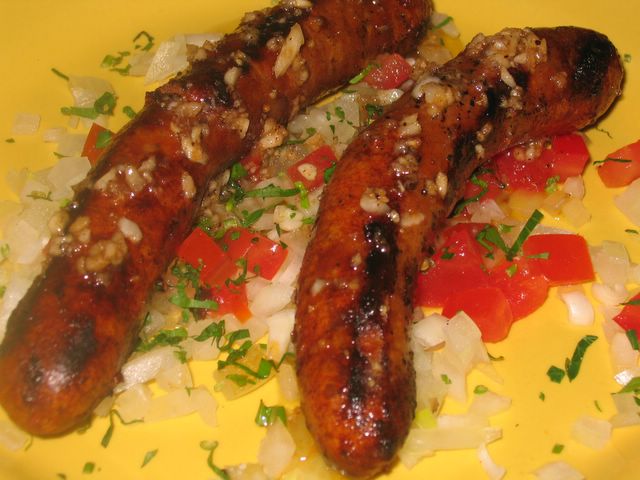 two grilled merguez sausages didn’t look very attractive. scrawny, wrinkled, awkward they reminded me of over-tanned little old men in speedos on venice beach, trying a little too hard to look sexy on a bed of chopped onions, tomatoes, parsley, and garlic. perhaps the kitchen had gotten too busy, but they would have done better to slice the sausages so that they didn’t look so...unappetizing. they were spicy, yes, but merguez sausage i think, is a little dry for my taste.

we ordered the seafood antipasto off the list of specials. i hadn’t read the menu, so didn’t know what it would comprise. against a bright white rectangular plate, there were four exclusive little cliques of our friends from the sea, and pretty pile of red onions and caperberries in the center. i examined it all carefully, and couldn’t identify by sight a mass of what looked like sliced, bloody flesh. i wasn’t brave enough to try it, and good thing since i was told that this raw octopus was not good. *phew* i’m not an extraordinarily squeamish eater, but this one just looked a little too gory. plus i don’t like octopus. and raw? forget it.

instead, i went after what i recognized and loved – giant caper berries and pickled red onions. these were, of course, meant to be an accompaniment, but i ate them like they were an entree. they weren’t nearly as tart as pickled anchovies, which, swimming under a sea of marinated red peppers, i missed at first. they weren’t outstanding, but to make up for the lost octopus, i think i ate most of them.

why three very dry, very tough cubes of tuna was called tuna confit is beyond me. isn’t it usually fairly moist because of the fat in which it is cooked? i left a half bitten piece of tuna on my plate. yes, it was that bad. unless it is specifically salted and dried (like the cod), fish should be moist. it was meowmix. there were also warm salt cod toasts, sliced baguette with the same salt cod puree as the brandade spread on, then toasted to crisp. with my horrible table manners, i scraped the brandade off the toast and ate it. i left the bread behind like i did with the brandade.

four small plates weren’t enough to fill us to embarassing levels, so we still had room for dessert. the last time i had been, the bread pudding was a regrettable choice. had the bread pudding actually been warm, then perhaps the paltry portion of vanilla ice cream, hardly worthy of being called a scoop, could have melted moist to save its from being so breadfully dry. but maybe i had just been the victim of circumstance, and since this is the one that gets a lot of attention, we order the bread pudding again. it was served in its own little ramekin with a generous scoop of ice cream languidly melting into vanilla rivulets among the bumps and lumps of custardy bread. much better this time, though there were still some suspiciously hard, chewy bites. fresh blueberries were a nice touch, but an unneccessary attempt to remove diet-cheating guilt. we finished dessert, and promptly vacated space for the still full waiting area.