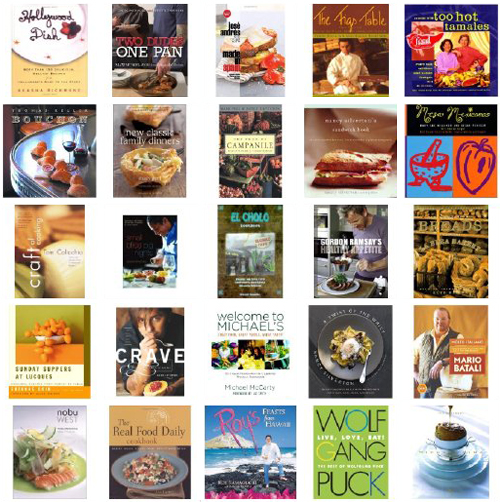 [each book's image also links out...]

He didn’t believe I cook.

I had oft-mentioned the Holiday baking and cooking I’ve been doing. I proudly showcased a portfolio of photographic evidence of results of attempts in the kitchen. He had first-hand flavor experience of pancakes I made for breakfast.

In a way, I suppose he was right. I can cook. It’s just making the claim that “I cook,” as if cooking were a normal, consistent part of my life, would be a bit on an untruth. Sure, there have been moments when I’ve made some kind of attempt in the kitchen, as evidenced by dirty dishes in the sink and a frying pan tipped over the side of the burner, crusted over with UFO (unidentified food object), but really, can making hard boiled eggs doused with hot cock once every four weeks really be considered “cooking?” That’s like someone publishing a half-written post every three months and calling herself a blogger.

Not only do I have the ability to cook, I love to cook. Cooking is a solo, selfish, therapeutic activity. The time I take to cull together a proper recipe, shop at the market, prep ingredients, and finally just cook is “me time.” Cooking is something I do to relax and unwind. However, when you lead the kind of (anti-social-)lifestyle I’ve been leading for the past two years – blazing through a 24 by 7 work week at the speed of the Internet – you have to make choices. With demands for “social” time from friends and family, selfish activities get cut from the program one by one.

Reading for pleasure was the first to go. Cooking at home followed shortly thereafter. Pretty soon, I won't have time for personal hygiene.

Oh wait. I'm a blogger. I stopped showering long before any of this.

To what all of this boils down is that I have stacks of forlorn cookbooks on my coffee table. They have only the faintest indication of wear -- broken bindings -- because I can never resist that first flip-through when I first get it, but the pages are still crisp, far too clean, lacking the tell-tale signs of loving, frenzied use in the kitchen. There are no fingerprints on the glossy photos. There are no transparent rings where I used a bottle of olive oil to hold down the page. There are no splash stains of balsamic vinegar or hard, cracked globs of tempura batter that escaped the mixing bowl. When once I could feel a thin, powdery coating of flour on each page, now there's nothing but a thick layer of dust on the cover.

Most of the cookbooks were gifts. I will keep them forever.

So here's The Big List of Los Angeles Chefs' Cookbooks, Gift Ideas for the LA Cooking and Dining Uber Foodie (yes, I hate the word "foodie" but none fits better in this context) in your life, because The Delicious Life is lived mostly in LA and because books, like diamonds it seems, are forever.

Hollywood is Full of Fruits and Nuts: Hollywood Dish

Bazaar Love Triangle: Made in Spain: Spanish Dishes for the American Kitchen

Run for the Border Grill: Cooking with the Two Hot Tamales

Bouchon, Bouchoff: I have had the Bouchon Cookbook for almost five years, but never cooked from the coffee table book that could double...as a coffee table. I still haven't cooked from it, though I watched someone make Keller's Cauliflower Gratin in my kitchen. [I'm also collecting Bouchon recipes in one place, which is silly because I have the book, but I'm just obsessive like that.]

Top Chelf: You don't need an entire cookbook to grill a steak, but you do need Craft of Cooking if you want Top Chef's and Century City Craft's, Tom Colicchio in your house.

Ate Ounces: My copy of Chef Govind Armstrong's book is autographed. You'll just have to hate me while you make a Grilled Cheese Sandwich with Pulled Shortribs.

Lean Like El Cholo: If you grew up like I did thinking Mexican Pizza from Taco Bell was authentic, El Cholo (and I) have three words for you. Green. Corn. Tamales.

Lucques, I am Your Father: First there was Lucques. Then there was AOC. Now with Tavern, Suzanne Goin has pulled off a hat trick. Her cookbook is a collection of recipes inspired by Sunday Suppers at her first restaurant. Now I'm waiting for a cookbook with a recipe for Bacon-wrapped Dates. Or maybe just a recipe for dates.

Haute Coq: Crave: The Feast of the Five Senses is not a cookbook. It is a LookBook. Okay, fine. It's a cookbook.

Going Back to Cali: I went back to Michael's a few weeks ago for the first time in probably 10 years. It is exactly the same, soft pink and seafoam green vibe and all.

Puck You: Live, Love, Eat! The Best of Wolfgang Puck

Did I miss any? Add them in the comments...