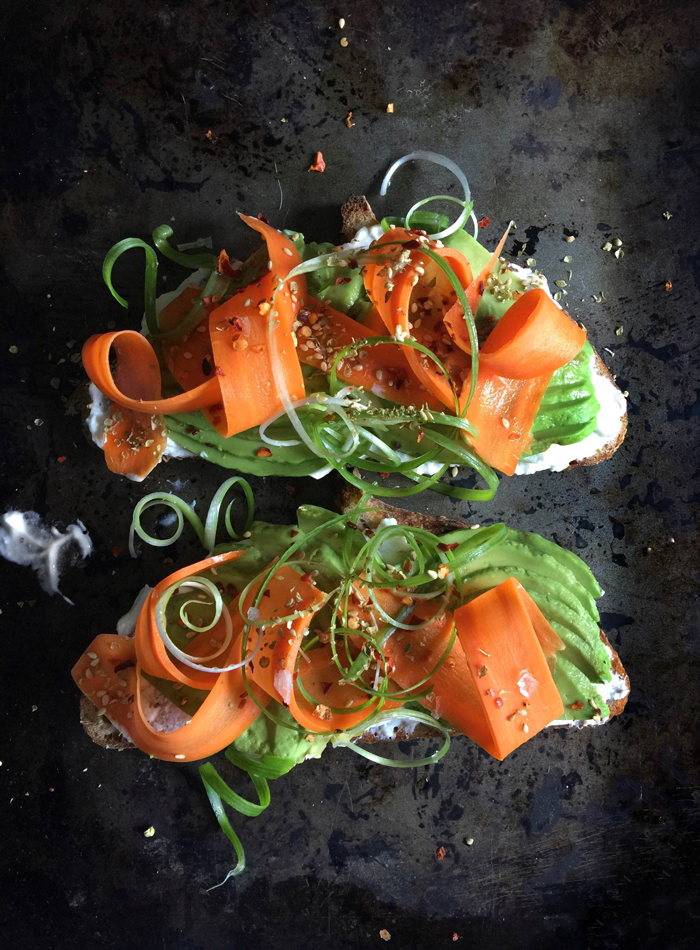 Recipe for Avocado Toast from Everything I Want to Eat: Sqirl and the New California Cooking cookbook below, notes about my changes/substitutions follow.

from Everything I Want to Eat: Sqirl and the New California Cooking cookbook

for the Garlic Cream*

for the Spice Mix

for the Avocado Toast

Make the Garlic Cream: In a bowl, combine the garlic, shallot, lemon juice, and ½ teaspoon salt. Let the garlic and shallot soften for about 10 minutes. Fold in the crème fraîche, then taste and season with a bit more salt, if needed, Lightly whip until fluffy with body but still soft and spreadable.

Make the Spice Mix: Stir together the oregano, sesame, and sumac.

Assemble the Avocado Toast: Brush a friendly amount of melted butter on both sides of the bread, then toast in a toaster, toaster oven, or skillet until golden brown.

Lightly spread the garlic cream across each slice of toast. It'll melt into the the bread; that's good. Arrange the avocado bologna on top, then add a tangle of pickled carrots, using your fingers to lift he carrots and create lots of height. ... Garnish with the scallion and spice mix. Squeeze a little lemon juice over everything and finish with a sprinkle of fleur de sel.

* Note on Garlic Cream: You'll end up with more garlic cream than you need for two servings of toast, but this stuff is good on a lot of things. ...

Peel the carrots, then slice them lengthwise as thinly as possible, (We use the meat slicer, but you can use a mandoline or even just a vegetable peeler to get them paper-thin.) Place the sliced carrots in a 1-quart jar or other container of similar size. They should all fit, assuming you're leaving out the randomly shaped end pieces that you held onto while slicing. Stuff the dill and cilantro into the jar as well.

In a pot, combine the vinegar, chile, sugar, salt, peppercorns, cardamom, coriander, garlic, and 1 cup water. Heat, stirring to dissolve the sugar and salt. Remove from the heat, then pour over the sliced carrots, Cover and let sit at room temperature overnight.

Taste a pickled carrot and see if you like how pickled it is. Depending on how thinly you sliced the carrots, they could be pickled to your liking at this point. If they are not, move the jar to the refrigerator and let the carrots pickle for another day or two.

Pickled carrots will keep in the fridge for at least 1 month. 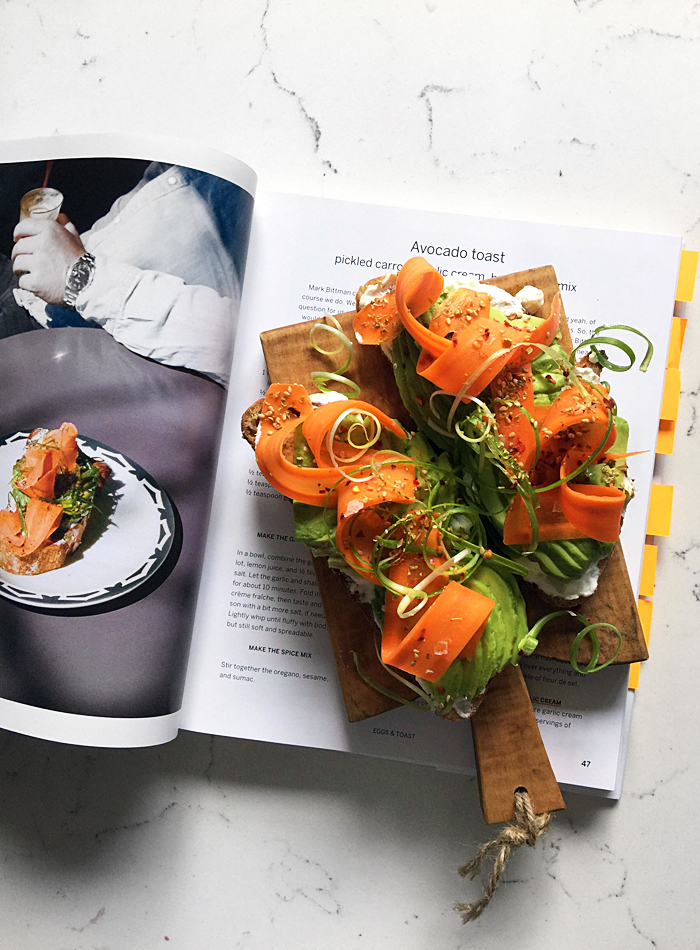 Though I love the idea of garlic cream, I made a substitution for it for a number of reasons, ranging from "I'm not eating dairy right now" even though I ate half a cheese plate for dinner last night, to "I don't want to spend money on an entire container of expensive crème fraîche just for one recipe and waste the rest" even though I am planning to bake a crème fraîche cake later this week, to finally "I have everything in my kitchen right now except the crème fraîche and I am way too lazy to put on pants just to go to the store" which is the bottom-line reason.

I simply swapped out the crème fraîche for (vegan) almond milk ricotta which I always have in my refrigerator. I don't even know what a whipped crème fraîche would taste like, particularly with respect to texture, but I am guessing that the consistency of almond ricotta is nowhere near it in similarity. BUT it is the same color, and hell that's good enough for someone whose excuses include not wanting to put on pants.

Ok, ok, I also do not have ground sumac, so I substituted with crushed red pepper, again, simply because they're basically the same color, which is the worst way to substitute ingredients in a recipe, but 1) this is avocado toast, not a souffle, 2) I think I've tasted sumac before and I don't particularly like it, and 3) I honest to God did not really have anything else that even resembles ground sumac in my pantry.