Home » cooking » Buckeyes {recipe} - Being a Hot Cheerleader Has Its Disadvantages. Like Airplanes to New Orleans 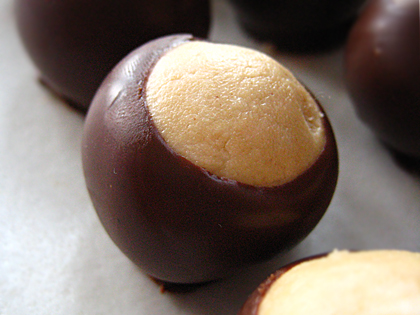 That was my forehead hitting the keyboard because this little masquerade of hotness is over.

(On a side note, how many people can say that, at the age of thirty -*coughcough,* they still have the body they had in high school? Huh? How many women you know have the body shape of an 11-year-old boy?!?! Wait, uh, never mind.)

No, I wasn’t hot in high school.

I was, however, a cheerleader.

I was. No, really, I was. I can prove it. I still have my old blue and white varsity letters with little gold megaphone pins that I pull out every once in a while to relive my glory days, which I now regret blogging out loud because it reveals a little bit more about me than anyone needed to know. At least I didn’t admit to doing all the cheer routines in front of the mirror with Friday Night Lights playing on my laptop.

Gawkward appearance in high school as mentioned above notwithstanding (because everyone, no matter to what clique they claim to have belonged, was weird-looking in high school), is it that shocking? Is it that much of a surprise that the sweet sparkling smile, perfectly perky personality and everpositively fucking cheerful outlook that manifests itself now as The Delicious Life was a goddamned cheerleader back in high school? Why do you think I am awash with nostalgia every time I watch Bring It On?

Oh, the bubble-headed blondeness of it all!

As unlikely as it may seem, I am, by nature, a cheerleader type. On the inside. It's less about the happyhappy clap!clap! cheer-y personality, less about an interest in the sport, and more about the activities associated with being a team's biggest fan. That's why I was a cheerleader in high school. I loved planning pep rallies and parties for the entire student body. I loved coming up with ideas for signs and banners that were perfectly themed with the opponent. I loved putting Good Luck signs on the players' lockers. I loved getting up early on Game Days, preparing for "showtime," cheering for the boys, and of course, watching them win.

It explains why I love things now that, when I think about it, are basically adult equivalents of being a cheerleader in high school. I love throwing dinner parties, coming up with themed ideas for stories and blog posts, making and wrapping up pretty little gifts. I love getting up on weekend mornings in the fall and having the game on in the background while I blog about tailgating. Most of all, I love being someone's biggest fan.

I also loved parading up and down the halls in a tiny little skirt and crushing on hot quarterbacks, but that has nothing to do with anything right now except that sometimes I wear an apron even when I'm not cooking, and I often refer to myself as Mrs. Manning. 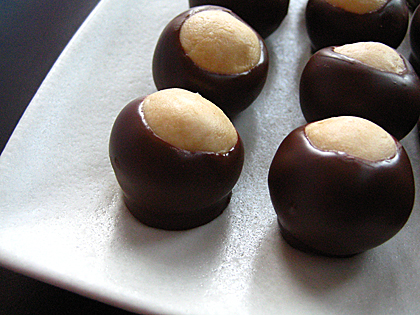 But Peyton, that's the NBA! This is college football and though technically, I am a Golden Bear first (Cal undergrad) and a Bruin second (UCLA grad), this past fall, I rekindled a keen interest in the Buckeyes. Oh, the inter-conference horror! I didn’t actually attend "The" Ohio State University, but I did spend the latter half of my pre-college life in Cincinnati. Naturally, I associate high school, cheerleading, and football with Ohio – funny how this whole story seems to work out so well – so it’s enough to say that historical association (and personal, but I'll get into that another day) made me a very enthusiastic Buckeyes fan this fall. 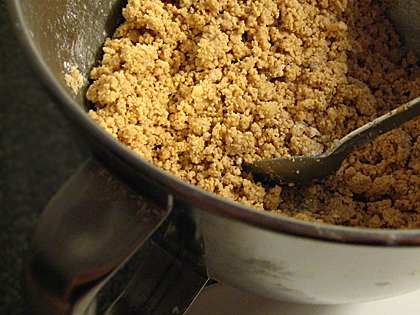 In fact, my inner high school cheerleader (from Ohio) was so enthusiastic that in advance of The Big Game -- Ohio State vs. Michigan, not Cal vs Stanford nor UCLA vs USC -- I did what any good food blogging football fan worth her weight in pizza and Buffalo wings would do. 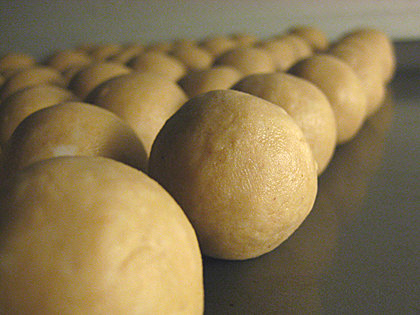 I made buckeyes (the peanut butter kind) that look like buckeyes (the inedible horse chestnut kind) in support of the Buckeyes (the Big Ten kind (also inedible, for the most part, but again, I'll get to that another day when I'm not putting parentheses inside parentheses)).

Ohio beat Michigan, but that's not the real problem.

Somehow my perfect little balls cheered forward and now Ohio State is playing in the G*d***ed national f**king championship game, so LOOK INTO WHAT MY CHEERY F**CKING CHEERLEADERY SUPPORT HAS GOTTEN ME!

I am going to New Orleans in January. 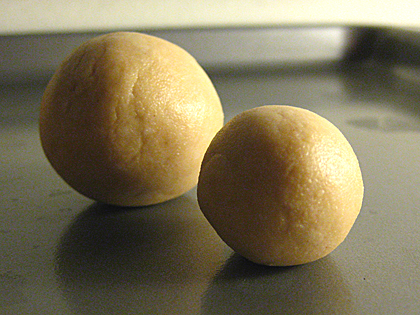 As a recently renewed Ohio fan, going to the Superdome is awesome. As a food blogger, eating my way through muffulettas, oyster po' boys, bananas Foster and beignets is again, awesome. As an aviophobe, getting to the Crescent City IS NOT A BIG EASY because last I heard, even if John Madden's bus were heading down to the Crescent City, it wouldn't make a detour through LA to pick up one Delicious, terrified of flying.

Hopefully buckeyes have the same effect as Xanax. 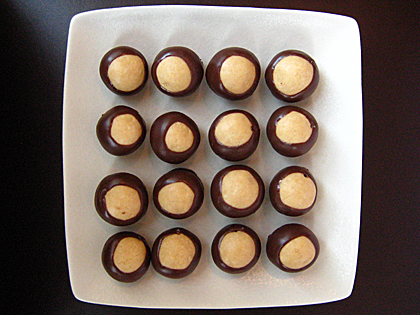 Put Bring it On in the DVD player. You will need to watch something while you spend nine thousand hours rolling 2 bazillion 1" balls by hand.

Beat 1½ c. peanut butter, ½ c. softened butter (that's 1 stick or 8 Tbsp for the people who don't do conversions), and 1 tsp vanilla until smooth. Stir in a 1 pound box of confectioner's sugar. You can dump the sugar as is, but I sifted it because I'm a freak and sifting something makes me feel like I'm actually baking.

The "dough" is supposed to be crumbly. Take about 1 tsp of the crumbs and roll into a 1" diameter ball. Place balls on sheet or tray lined with waxed paper. Chill peanut butter balls in refrigerator for at least an hour. I got lazy and put off the next step until the next day.

{originally published December 2007, in advance of the 2008 BCS National Championship Game at the SuperDome in New Orleans LA, the game in which The Ohio State Buckeyes lost to LSU}