01. Exhausted and Desperate and Starved

My gold-digging comment got a chuckle out of my friend but we weren't talking about dating.

Rather, she wasn't talking about dating...

She was talking about my job.

Or, I guess it's okay to officially now call it my career. It's hard to explain to people when they ask me "so...what is it that you do now?" It doesn't fit into the five things that my parents consider "real jobs," not even the fifth career catch-all bucket "married" "entrepreneur" into which they tried to drop me when I graduated from business school, but out of which I crawled when I started doing all of this.

"This," of course, is posting this, that, and every damned other thing about food on the internet. The part that's hard to explain is that I'm not a food critic, food writer, chef, in "the industry," which in this case means the "restaurant/hospitality industry," and not that other "industry" of which 90% of the people in LA are part, and which really is the same industry since 90% of that "the industry" actually works in this "the industry."

I have a blog (duh) and a website. So I guess that could make me a Media Micro-Mini Mogul. Neither site is the next big thingterest. Neither is about to get acquired for millions of dollars. (But if you're looking to buy, call me! No offer too small!) Neither site is about to IPO for a bazilliion dollars.

But somehow, because the subject matter itself is food, I get to eat and drink like a CEO doctor who is married to a CPA lawyer. In fact, I don't eat instant ramen from the vending machine for dinner at 10 PM alone in my office three nights a week, so actually? I probably eat better.

It's not unusual for people to dine out almost every night of the week. Though I've never lived there and experienced it myself, New York City itself is a lifestyle with dining out built right into it. But I live in LA where we don't really have an excuse for not cooking at home. We have access to amazing ingredients and the real estate for decent-sized kitchens.

Sometimes it's a geography thing, and sometimes constantly dining out is an age thing. During my early 20s, most of my friends, especially the guys, wouldn't have survived otherwise. Into our 30s, we could actually afford to dine out more often and at places that are better than a drive-thru or delivery. But at some point, most of us "settle down."

And we know what that means.

But I never got there. Just when everyone else around me was falling off a regular social circuit and into that place, aka "home," where people aren't people, but "couples" who eat roast chicken and salad and puree organic vegetables into baby food, you know, for their babies, I kicked it into high gear. It wasn't "socializing" with friends, per se, but I started dining out a lot. I mean, a lot. Food festivals, restaurant openings, media luncheons, PR dinners, pop-up events, tv show tapings, and just dining out night after night after night to write on this here little blog.

People say "every waking hour" and it's figurative, an exaggeration to make a point. But do they grab their phones from the nightstand before even opening their eyes and start answering emails in bed with the phone an inch-and-a-half from their -10.5 eyes because their glasses dropped behind the bed when they fell asleep while emailing with them on the night before? Do they walk down the hall and turn on the computer to "check-in" before even going to the bathroom? Are they online, no, seriously, literally online Every. Waking. Hour, even that hour some time in the late afternoon that should have been in the shower, but instead were online uploading photos for tomorrow's blog post?

I dine out all the time. Talk about food all the time. Am online literally "every waking hour," and I never get sick of my "job" because, as I replied her between bites of my salad, "Bitches gotta eat."

But her question, "Isn’t it all so…exhausting?” echoed in my head for weeks.

I had also just come off a year of single-but-open-to-seeking after the most devastating breakup of my life. (Don't think you're not going to hear about that one.) I don't remember much of the the two months immediately following the breakup, probably because every day bled into the next and it all felt like one big weepy blur. At some point, though, I must have "woken up" out of that functionally catatonic state. And taken a shower. I started to meet guys again.

It wasn't some "I do"-or-die mission, meeting a new guy every night, or even every week, but for someone who almost never "dates," the half dozen or so guys I randomly did meet and "hang out" with for several weeks at a time over the course of the following 9 months sure felt like a rigorous, calculated agenda.

I was tired of it. Not that I didn't enjoy the time I spent with each of those guys, some more than others of course (and ok, some not really all that much), but it all started to feel somewhat pointless. I was tired of the routine. I was tired of failing at something that I wasn't even trying to do in the first place. I was tired of meeting guys. I just wanted to be with The Guy.

There had to be a better, more efficient, and ultimately more successful, way.

Sitting alone in my office at 10 PM, hunched over a laptop because I was too cheap, too non-committal, too lazy to invest in a long-term desktop solution with a real keyboard into which I was splashing soup and dropping irretrievable crumbs, I munched on my dinner — whatever it was I had found in the refrigerator.

And finally signed up for a dating app. 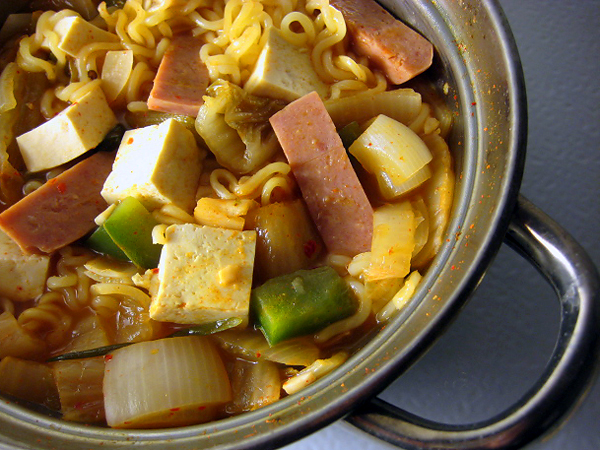 In a previous career, there were many nights when I'd be alone in a dark and hollow office working, huddled in my cubicle fueled only by hate and instant ramen. Instant ramen is the kind that you don't even have to cook; you just fill the styrofoam container in which it comes with a little bit of almost boiling water from the red spout on the Sparkletts cooler. Three minutes later, it was ready. The tangle of what was essentially shredded paper and rehydrated neon rainbow raisins saved my body from starvation.

But it couldn't save my corporate soul from dying.

I'd like to think Budae Jjigae (pronounced "boo-deh") is a step up from instant ramen. It's not actually ramen, but a Korean "stew" of sorts that has ramen noodles in it. It doesn't really require a recipe, but there is actual cooking involved! You start with a package of ramen and add whatever you can forage from your pantry and refrigerator: goh-chu-jang to boost the ramen soup base, chopped kimchi, onions, scallions, vegetables, Spam, hot dogs, Vienna sausages, bacon, American cheese (see? I told you.).

Born out of desperation (it originated during a time of food scarcity after the Korean War), Budae Jjigae is the perfect kind of thing to eat at your desk when you're alone at home late at night setting up your online dating profile. 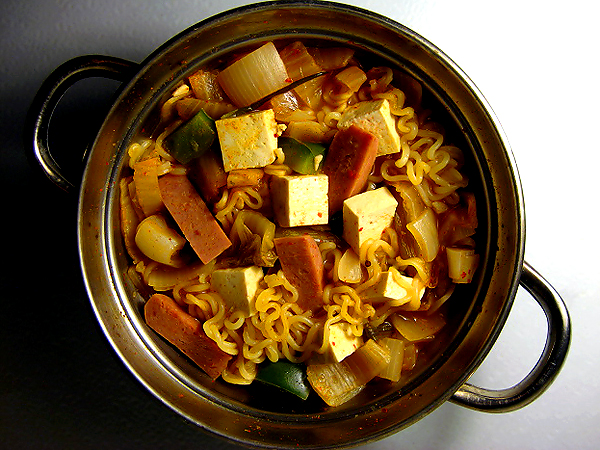