It was the request for a favor that I almost never turn down.

“Mustang, this is Maverick requesting permission for fly by."

Okay, so I don’t live in a Top Gun fantasy world (at least not all the time), but if anyone ever asks me for a ride to/from the airport, a “fly by” if you will, for some reason, I can’t ever turn them down. I don’t know why. Perhaps it has something to do with the five years that I had to make that little trip myself every Monday morning and every Thursday night in a clunky, junky, no-shocks, cracked-leather, smoke-filled scary Buick hoopdie-turned-taxicab and wouldn’t wish that kind of rush-hour misery on anyone else. Besides, long-term parking, no matter what kind of WallyPark coupons you have from the weekly Val-Pak mailer, costs a small fortune. Or maybe I just love the idea of going to the airport, but never having to get on one of those winged metal death traps. If you ask, I will take you.

When the request came in, for a 7am flight on a Sunday morning, I groaned. 7 am? On a Sunday? But then my brain started turning. 7 am on Sunday morning is perfect. This is purrrrr-fect, for now I had the perfect opportunity to pick up birthday cakes the morning of our birthday celebration for Dad and my brother-in-law James. What was even better was that I wouldn’t be grumpy about driving all the way down to King’s Hawaiian, just past the sirport, when once I was racking my brain about where to get birthday cakes on the Westside.

Everyone knows King’s Hawaiian. If you stroll through the bread aisle at any supermarket, you’ll see their dark orange plastic bags peeking out from the shelves – sweet Hawaiian bread in regular sandwich loaves, round loaves, hamburger buns, and if you’re packing snacks for the delivery room, dinner rolls. Hawaiian bread is as soft as Wonder White without being textureless, and has a slight, light sweetness. Thick slices of Hawaiian bread make luxurious French toast.

But not everyone knows that King’s Hawaiian has a restaurant and bakery in Torrance, and that the bakery bakes cakes. Well, I guess now we all know. I called them up and asked them if I could pick up some birthday cakes on Sunday morning, early? “How early?” 7 am. “Not a problem,” the happy Hawaiian voice said, “We open at 7.” I was grinning. I was giggling. I might even have done a little shuffle-step of a monkey jig. We’re having King’s Hawaiian cakes for Dad’s and James’ birthdays! Yes, yes, I totally realize that I am a complete and utter dork.

a little slice of tropical paradise

I have had the cakes from King’s Hawaiian before. When I was working for the big boys in El Segundo, every month, we would have an office birthday party, and if I happened to be “on the bench” during that time, I’d play along with the stupid HR-dictated company-morale-building charade and go into the break room, sing happy birthday to people I had never met, then abscond with a piece of cake back to my miserable temporary cubicle. Usually, it was some run-of-the-mill half-sheet grocery store factory produced yellow cake with chocolate buttercream frosting and unisex piped rosettes that generically screamed out “Happy Birthday, [insert month here] Babies!” in bright blue and green. But once, the cake was different. I sneered. I jeered. I rolled my eyes at the itschy kitschy My Little Pony colored layers filled with dreamy whipped cream and topped with hyper-chromatic glaze and funfetti. Still, for God's sake, it's cake, so like a thief in the night, I snatched my piece and ran off with my only reason for ever coming into the office, an extreme sugar high.

The cake was soft. The cake was tender. Though the layers were the pastel-zed version of Rainbow Brite, they were softly fragrant of pink guava, passionfruit, and light green lime. The frosting was a light whipped cream and though I wasn’t fond of the highly unnatural glaze on top, I guess the colors added to the charm of it being called the “Paradise Cake.” I was smitten. And what do you know, at at that time (a very long time ago, mind you), I was *ahem* dating a South Bay boy, and everyone who’s anyone in the South Bay gets their birthday cakes from King’s Hawaiian. I ate a lot of Paradise Cake during what I will call my South Bay Stupidity ;)

But that was two jobs, three guys, and many many birthday cakes ago. I had thought about the Paradise Cake from King’s on occasion whenever I was dubbed the birthday cake wrangler for a friend. Torrance, however is a long drive, and 40 minutes on the 405 (if I’m lucky) wasn’t worth it for Paradise. I hadn’t had the Paradise Cake in a very long time, but an LAX flyby gave me the opportunity.

King’s Hawaiian actually has two locations. The main restaurant and bakery is on Sepulveda Boulevard, deep in the heart of Torrance. However, a smaller, satellite location lives on Western Avenue, right off the 405 freeway. It’s called The Local Place. When I called, they told me to hit up The Local Place to make it easier on me, coming from,and going back to the Westside. Isn’t that sweet of them?! I think so.

After taking the United short cut across the airport loop (which I love to think is a secret to everyone else except me), I hopped back on the 405 and headed down to pick up a piece of Paradise. I followed my google maps directions, and King’s had not misinformed me. The Local Place is very easily near the freeway. In fact, it was all coming back to me now...deja vu...the hazy drive, the ume shu, the chicken hearts... I had been in this area, on this corner in fact, just a few months ago...for Shin Sen Gumi. 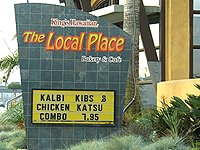 what are kalbi KIBS?

I chuckled as I turned the corner that had a sign board advertising “Kalbi Kibs.” If it weren’t just past 7 am, I would have considered ordering it to try it, but there is such a thing as too early for Korean barbecued short ribs. Though early, there were already several cars in the parking lot, including a black and white.

now that is paradise

Inside, The Local Place is a standard bakery and cafe, with a case of regular morning pastries like croissants and muffins on one side of the “Order Here” counter, and a case of cakes and pies on the other. However, it’s very clear that The Local Place belongs to the King’s empire, with one whole wall offers King’s Hawaiian bread. An older Asian couple was sitting in the window enjoying a breakfast of eggs and ohmigod! Spam. I sort of wanted to take a picture, but there were also two uniformed officers sipping on coffee, waiting for their breakfasts as well. What would they do? Arrest me for taking pictures of food? I don’t know. It was early. I stepped up to the counter and started asking questions.

King’s has a lot of cakes and pies – the standard chocolate and vanilla cakes, coconut cake, guava cake, different mousse cakes, cheesecakes. I was there for the Paradise Cake, but couldn’t resist getting a second cake. We’re celebrating two birthdays, right? Right. Give me the Tiramisu Cake! The abnormally-chipper-for-7-am counter kids spelled out Happy Birthday, wrapped up the cakes, and I was off.

Suffice it to say that the cakes were a hit with both my Dad and James, especially set ablaze with candles. The entire birthday crew was already pretty stuffed after the Sunday Champagne birthday brunch at Taps, but no one, I mean no one, can ever say no to a Korean ah-joo-mah (my Mom) offering slices of birthday cake.

happy birthday to the king of hearts

for my favorite monkey's dad!

The Paradise Cake was as I remembered, light, tender, and though the guava, passionfruit, and lime flavors weren’t quite as strong as I had thought. The tiramisu cake was delicious, with thin layers of a soft, sponge-y cake alternating with thick layers of dense, luxurious mascarpone faintly fragrant of coffee. It had a whipped cream frosting and was decorated with pert dark chocolate diamonds. I plucked two or three of them off and ate them myself. Hey, that’s compensation for going all the way down to Torrance on a Sunday morning.

I made a note to myself that I would eventually have to go back to King’s at a decent hour to try some of King’s plate lunches – Kalua Pork (smoked shredded pork), Hawaiian Fried Chicken, Loco Moco (grilled hambuerger patties topped with fried eggs and gravy), and of course, Kalbi. Hey, I might even try the Spam Scramble since it's only $2.95 ;)

« I'll Take an Alka Seltzer on the Rocks - Dine & Dish Coming Soon
Let's Wander Out to the Pasture and Graze - Dine and Dish no. 6 »