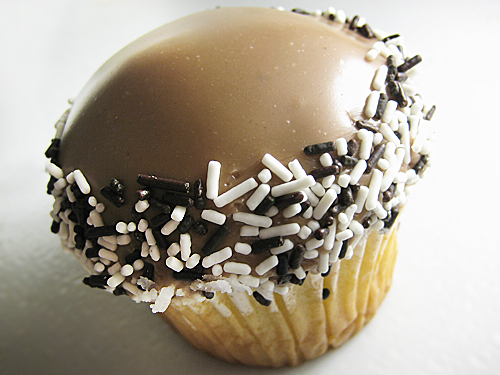 Cupcakes are like the Stephanie Tanner of the dessert world.

You don't know Stephanie Tanner? Of course you don't. No one actually remembers her by name — the little girl with the golden rolled locks and the missing front teeth that resulted in a semisweet speech impediment every time she exclaimed "How rude!"

Now, it's ringing a bell. We were in middle school. TV. Full House. And really, no one remembers any of the Tanner kids by name because Full House was all about...

Let's take an unnecessary sprint down Memory Lane, then make that dreaded, exhausting crawl back up, shall we? There were three Tanner girls on the show. DJ was the oldest, but as the perpetually overlooked oldest daughter in my own family, I would never expect you to even remember that there was an oldest Tanner daughter, let alone that her name was the cruelly androgynous "DJ." Trust me, my therapist and I know about the shame and blame of being a first-born non-son. However, as forgettable as DJ Tanner is to you, she was the enviable older sister to her younger sisters and in the eight-year duration of the show, never seemed to hit that awkward stage of pre-pubescence into which her dorky best friend Kimmy Gibbler was cursed for her entire life. Nowadays, you don't hear much about the actress who played DJ, Candace Cameron, unless you're active in the Christian community. Candace blossomed into a beautiful, blonde, soft core Jesus freak with an impossibly normal family. And a twitter account.

Michelle was the youngest Tanner. Many were utterly charmed by toddler Michelle, and while I never fell under that same spell, I can appreciate the appeal of teeny, tiny-ness. Baby Michelle was played by not one, but two tiny, adorable, attention-grabbing girls. Oh, who are those twins now? What are their names? Oh, right. Mary-Kate and Ashley, who are so retardedly rich and famous that God thought it only fair to split that kind of success between two people. (This metaphor of an older, overlooked daughter and younger spotlit twins is all too familiar now, isn't it?!)

In the cases of both the oldest and youngest Tanners, the child actresses who played them grew up past their Full House history into normal adults with their own identities, or at least "normal" relative to their peer group of "Early '90s Child Stars."

Which brings us back again to Stephanie Tanner, Danny Tanner's darling second daughter, played by Jodie Sweetin. Like MK+A, Jodie Sweetin as a little girl was her last name incarnate, totally adorable, especially playing up the mischievous middle child pout. Unfortunately, unlike her co-childstars, Jodie is one of those picture imperfect "Where are They Now" stories that, sadly, is not even interesting enough to be made into an actual episode, or at least not one that airs during any reasonably prime time. The doubly divorced, doubly D'd mess of a meth-addicted overgrown muffin is barely recognizable as the cute little cupcake she once was, and yet Jodie will always only ever be known as "used to be Stephanie Tanner."

And such is the same, sad "growing up" story of cupcakes. Remember cupcakes? Remember how cute they were? It wasn't that long ago when cupcakes were, in fact, teeny tiny versions of regular cakes, in ruffled little wrappers, frosted with only enough sticky sweetness to make you want more. Cupcakes could have gone the virtuous way of Candace Cameron, leaving that bit of childhood nostalgia, where it belongs, in the memory of your childhood. Cupcakes could have gone the way of MK+A, growing in fame and fortune, but remaining true to their physical definition of small and cute.

Instead, cupcakes StephanieTanner'd into the likes of Crumbs - cupcakes that have augmented in size to monstrously unnatural proportions that explode out of their wrappers, abusing all kinds of substances like ganache, frosting, candy, sprinkles, powder, meth, whatever-you-want-to-call-it to hide the rather dull, dry cake underneath. 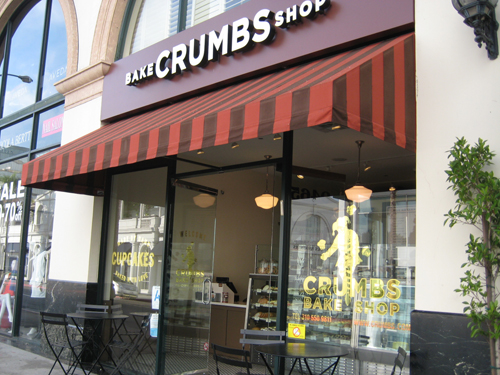 I went to Crumbs without having done much research, only with the knowledge that the Beverly Hills store was just a few doors down from Sprinkles, the cupcakery that introduced me to the reincarnation of cupcakes as butterfat behemoth bowlcakes.

I didn't know cupcakes could be, and Crumbs would be, even bigger.

The store itself is not remarkable - just your standard shallow store front that hints at a kitchen deep within. Whether there is actually any real baking going on back there is not of my concern. The cupcakes are lined up in a glass case just like any other bakery, but what was noticeably missing was a menu. Sure, there is a "menu" posted high up on the wall behind the counter, and there is a printed take-out-like "menu" in a neat little stack on the countertop, but there was nothing that listed out what each of the cupcakes were. You see, besides the very very basic cupcakes like chocolate and vanilla, Crumbs Cupcakes have non-literal, non-descriptive names like Artie Lange, Baba Booey, and Madison Avenue. Some of the cupcake trays in the case didn't even have nametags so it was impossible to identify a cupcake to the counter staff to ask what kind of flavors lurk under layers of swirled frosting and other shaved, crumbed and sprinkled accessories. You just point and hope that the counter person can discern through the glare of the glass which direction you are pointing. Of course, in the end, it doesn't matter because the acoustics of the store are such that every description mumbled over the nose-high-so-you-can't read-lips glass case sounds like "choconilla cake with mumbled filling, muffled frosting, gurgled glaze and somekind of sprinkles on the sides." 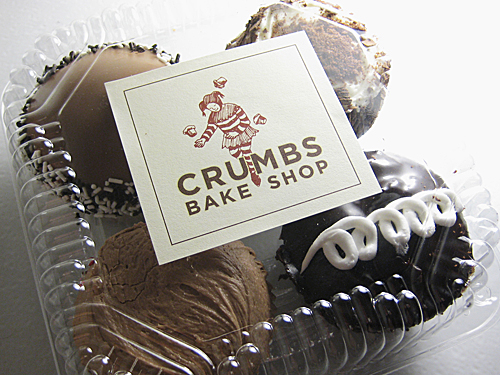 I bought the "Artie Lange," which I didn't recognize in the case, but just ordered because I had heard of it, something that looked like a permutation of chocolate-vanilla, Madison Avenue (named after one of the store's location in New York), a Hostess simply because I could guess what it was, and basic chocolate-chocolate. Crumbs occasionally does special edition cupcakes, and at the time, the NBA Finals were in full swing, so there were purple and yellow Lakers cupcakes on top of the case. I had already chosen four cupcakes, though. Why limit to four cupcakes? Because that's how big the box is. And the cupcakes are upwards of $4 each. 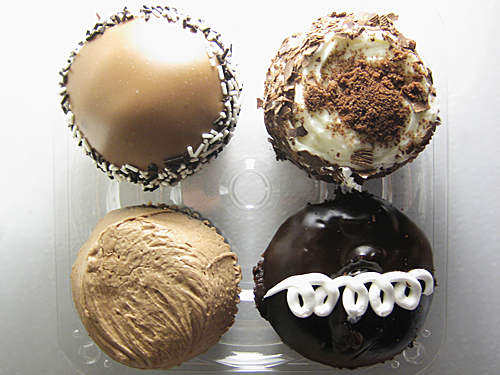 The Artie Lange, appropriately named for its creator, the overweight comedian on the Howard Stern Show, is vanilla sponge cake filled with chocolate buttercream, covered with a thick layer of vanilla cream cheese frosting that is additionally glazed over with chocolate fondant, the rolled in chocolate and vanilla sprinkles. It sounds decadent, looks pretty, but it, like Jodie and the other cupcakes, was too big to handle gracefully. The wrapper had to be peeled away, the cake cut with a knife on a plate, and eaten with a fork. Still, there were sprinkles and, um, well, crumbs in a mess all over the table.

Crumbs cupcakes defeat the purpose of a cupcake.

Chocolate-chocolate was fine, but you almost need excess adornments to distract you from the dryness of the cake. I didn't try the Hostess or the Madison Avenue cupcakes. Half each of Artie Lange and plain chocolate was enough bowlcake to last me until next year.

Or at least until Jodie Sweetin makes it onto TMZ again. 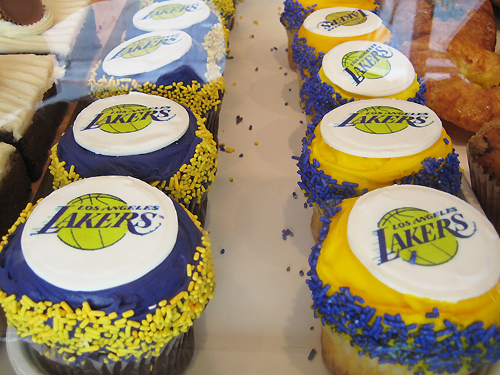 ~ 3½ out of 5 stars based on 245 Yelp reviews
~ 4½ out of 5 stars based on 22 Citysearch reviews
~ New York Times said "vanilla was bland even for vanilla." (ouch)
~ FoodInMouth had a Baba Booey (chocolate cupcake with peanut butter accessories) and "it's AWESOME"
~ Eater LA's up-to-date coverage of Crumbs Bake Shop locations in southern California
~ Caroline on Crack "found them too complicated" (Oct 2007)
~ The Cupcake Activist loved the Peanut Butter Cup Cupcake (May 2009)

« Swirls Frozen Yogurt, OC - Fro Better, Fro Worse
A Really Goode Job - Or the Only Thing for Which I Will Have No Shame. None. »