A long time ago, we used to associate the neighborhoods in and around Culver City and Palms with bargain basement apartment housing for college students who didn't want to waste their financial aid checks on ridiculous rents in Westwood, so it was, you know, sort of "ghetto." As we grew older and thought about where we would move in our more mature, sophisticated post-college years, we’d always “upgrade” by moving away from Culver City to places like Santa Monica and beaucoup-bucks Brentwood. And of course, people would never think to move to Culver City if they had good, regular paying jobs.

That was the perception. That was a long time ago.

But all that is changing now, rather rapidly, too, and I was right there in the thick of it (up until last week), watching the transformation of Culver City, or at least the downtown area and the little L-shaped section that was part of my commute to/from the office. Culver City is a huge area to be sure, and there are parts of CuCi (I made that up!) that are still a little run down, a little seedy looking, but they’re not dangerous. These areas might never get prettified to look like everything else around it, but that’s okay. We already have places like...Orange County. LOL! Just kidding. Well, not really. *ducks for cover*

Strips of Washington and Culver Boulevards that is known as Culver City’s downtown and the areas just beyond it are getting an extreme makeover, building by building. Old stores are shutting down, remodeling, and spaces that used to be vacant are no longer advertising For Lease signs in their windows as new businesses move in; and we’re not talking Wal-Mart, plebeian. One of our family friends just bought a beautiful house in Culver City. She and her husband are both über-lawyers in the league of Grisham novels and will likely outfit their house a la H.D. Buttercup. Big money comes to Culver City now.

This little ghetto of Culver City is growing up into *ooh la la* cosmopolitan CuCi, and though I won’t be there to watch it anymore, at least I can say I was there for some of it. *sigh* These are the types of things I think about so very deeply on my second day of freedom from employment, and really has nothing to do with any of the writing that is to follow other than the simple fact that good sushi is hard to find in Culver City. In fact, any sushi is hard to find in Culver City.

Unless you know...where Sushi Karen is. *raises eyebrows*

so simple it kind of stands out

ssh, it's a little tempura-mental

Sure, there are sushi joints like Sushi Sasabune, Sushi Tenn, Hide Sushi and Kiriko, but that requires driving all the way up to Sawtelle. Mori Sushi is nearby, too, but in addition to driving, Mori also requires a bonus commission check as well as a gastro-emotional energy that can't be mustered every day. Sushi Karen is just a a few short blocks up Washington Boulevard, and I will admit that even though it’s miles closer than the others, I still *ahem* drive. *blush* Come on, someone has to keep those poor starving oil/gas companies in business. On the south side of the boulevard, Sushi Karen might be pretty easy to miss crammed between a hair salon and some other random stores, but the simple, block letters stand out silvery sleek from the cartoon technicolor chaos around it.

mind if i snap(per) a photo?

I’ve been there twice now. The first time was a “business” lunch and I wasn’t much paying attention to the tempura and combination sashimi other than to take pictures. I’m sure he had raised eyebrows when I held up my finger with a *shh* to him as I slumped low in my chair with my face and camera five inches from the plate of snapper sashimi fancy-fanned out with spicy lemon salt. I told him it was a personal hobby that I omited from my resumé because “taking close-up photos with a PhD camera of food in public places” didn’t fit on one page. I haven’t heard from him yet.

can we (tuna) tataki?

The second time was a simple lunch with a co-worker. It was during the W lifestyle-change days, so pizza & pasta, fried chicken, and pita bread around which I have no restraint were off-limits. Sushi is light. Sushi is healthy. Unless, of course, you’re like me. Let me just embarrass myself by repeating that “I have no restraint.” 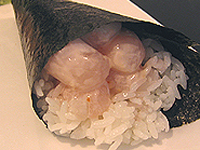 tiger eyes, they're watching you

Sushi Karen has typical Japanese lunch items like teriyaki, tempura, various combinations of both, as well as...Rome Chicken. I love it when a restaurant has one or two dishes that have absolutely nothing to do with its cuisine. Like an Ethiopian restaurant with spaghetti and meatballs or Sushi Karen with tomato and herb sauced chicken. I know there is some geo-politico-socio-historical significance to it, but it’s still funny to me, okay?! I don’t have a job, I don’t interact socially with people during the day, so leave me alone to laugh about it. *sheesh*

It’s always fun to eat with someone new because it forces you out of your usual eating rut. Though he and I and most others share the idea of “order” - light to heavy, lean to oily, mild to strong, we did a little negotiating over which mild and which strong. Tuna tataki had a peppery, seared edge that gave it an almost steak-like flavor. Hamachi (yellowtail) was soft and buttery, scallops in the temaki (handroll) were crisp fresh in a creamy sauce, aji (Spanish mackerel) was as strong as it should be, and the kanpachi (amberjack on the menu, but when I went to Mori, the elf said it was baby halibut) was interestingly prepared as juliennes in a tart sauce. The only thing over which I did not *mmm* was the tiger eye special. Salmon wrapped in nori, stuffed inside the body cavity of a squid, baked, then sliced like maki sushi, it certainly looked impressive on the plate, especially with a cute little pansy garnish. It was only *eh*. Especially that damned pansy garnish.

i don't do gonads. at least not on weekdays

Though he finished off with *ooh la la* uni, I chose a toothpick to end my sushi lunch. I do not yet appreciate sea urchin gonads. That’s right, you read correctly. Uni is not sea urchin roe (which to me, isn't all that much better) as someone might try to con you. They are the organs that produce the roe; in other words...Go. Nads. Lunch on a weekday is not appropriate for Sarah and gonads. Even at dinner on a weekend, it takes at least two decanters of Otokayama before I put gonads in my mouth. LOL!

Sushi Karen is a decent spot for lunch and Culver City is lucky to have a place that not only serves sushi, but fairly good sushi. The chefs cut the fish a little too large for my taste, but who’s really complaining about too much raw fish here? Too much uni on the other hand...