We were still living in San Antonio, Texas, in a little ivory house with banana yellow trim in a cul-de-sac on Whisper Valley Road. It was an English Tudor style, or maybe it was a quad-level, or maybe I am mixing up all the houses we've ever lived in all over the United States.

But I definitely remember our two cars parked on the driveway, a chocolate brown Oldsmobile 2-door sedan and the "woodie," because the garage was full of all that stuff that is always in the garage. Wooden tennis rackets, golf clubs, Craftsman tools, decaying patio furniture, and Mom's art stuff that we were never allowed to touch - easels, potting wheels, big red and gray blocks mysteriously wrapped in dusty plastic, and hundreds of tiny, crinkled, curvy tubes of what looked liked colorful toothpaste. They were Mom's clay and tubes of oil paints.

Back then, Mom used to cook all the time. She cooks all the time now, too, but back then, she used to make everything from scratch. She even used to haul out the big plastic tub, wedge it between her knees, and in that all-too-familiar (to Koreans, at least) "kimchee squat," massage chili pepper and garlic between the leaves of napa cabbage to make kimchee. Today though, there isn't a thing she can't buy at the market, already prepared, only needing a simple re-heating at home, or if you want to go Sandra "I'm not Asian" Lee semi-homemade style, you can buy all the ingredients for something in a nice little package to which you simply add water and boil or stirfry at home. Kimchee, mahn-doo (Korean won tons), dduk, soups, even noo-roong-jee, the crispy crunchy rice crust that forms on the bottom of a rice cooker. They sell the residue from the bottom of the rice cooker at the market like crackers. Ridiculous.

In that little house in San Antonio, Mom used to mop up the kitchen floor until it was so sanitary you could eat straight off the floor. She'd take a cutting board, a cookie sheet, sometimes one of those dark, lacquered Korean tea tables, whatever flat rectangle she had in the kitchen and line up three of them in a row on the floor, then seat me and my sisters, one at each "desk."

Each desk was outfitted with a tiny bowl of water, a medium sized bowl of "stuff," and a stack of wonton wrappers. She'd instruct us to lay out a perfect matrix of the wontons wrappers on our desks, roll tiny scoops of "stuff" and place them smack in the middle of each square, "paint" the edges with water, then fold and press each square into a plump triangle - mahn-doo. My mother would make a great CEO. Not only can she can manage to get a six-year-old and two four-year-olds to make mahn-doo, but we were doing our jobs as if there were nothing else in the world we'd rather do than bring a perfect pyramid of mahn-doo to her for her approval.

All I remember is sitting there with Mom and my sisters, making mahn-doo, sometimes silently with the concentration of a six-year-old trying to carefully squeeze air out of a sealed mahn-doo, sometimes bragging about how mine were so much prettier than my baby sisters', sometimes abandoning my stack completely to help them.

Mom doesn't make mahn-doo from scratch anymore. She goes to the local Korean mega super grocery store and buys a bag of two dozen frozen mahn-doo for $3.99. They're not RTE (ready to eat), but it's faster than making them from scratch, and they're definitely cheaper. A package of wrappers alone costs $3.99.

I can buy frozen, pre-made spinach and feta triangles at Whole Foods market, too. I think they're $5.99 for a box of a dozen. I could even look like I made them myself when I place the frozen triangles on a cookie sheet, "bake" them for 20 minutes, and pull them out of the oven steaming hot, in all my semi-homemade Sarah Lee glory. 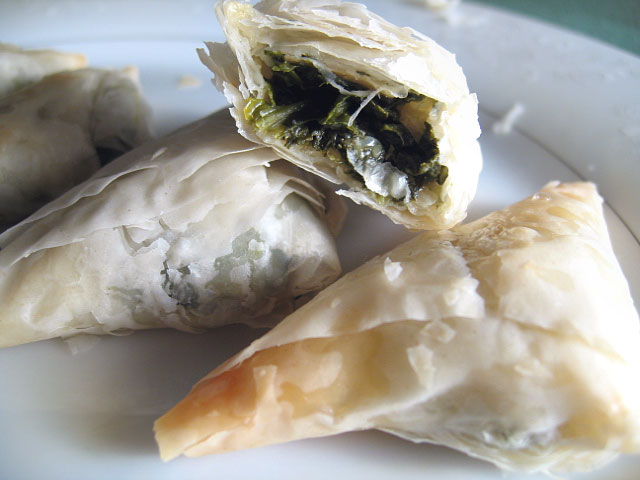 I'd miss out on sitting Indian-style on the kitchen floor at my sister's house, knees shoved under a low Mother-of-pearl inlaid Korean tea table. I'm on one side of the table wielding a pastry brush, and she's on the other side arms up and poised for action. On "Okay," she lifts the damp-not-wet paper towel, I quickly, but gently grab a sheet of phyllo, brush it with melted butter, and she lays down another sheet of phyllo on top. When she forgets to re-cover the stack of phyllo with the paper towels, I scream at her, "The phyllo! The phyllo! Cover the phyllo!" while slicing the buttered, double layer of phyllo into 2-inch wide strips. She'll scream back, laughing, "Why is there so much damn filling left?" And I'll have to remind her not to over-stuff them or they're going to explode in the oven (which they did).

I'd miss out on my brother-in-law, her husband, coming into the kitchen with a "What the...?!?! It's after midnight!" and then returning to the living room shaking his head. We'd make fun of him and guys in general, transforming into our Dads who yawn like lions roar and watch nothing but Animal Planet and History Channel. And we'd look at each other and laugh our heads off. But making sure the phyllo was covered, of course.

I'd miss out on sitting there making tiny, fat little triangles with my sister, just like we did when we were four and six. 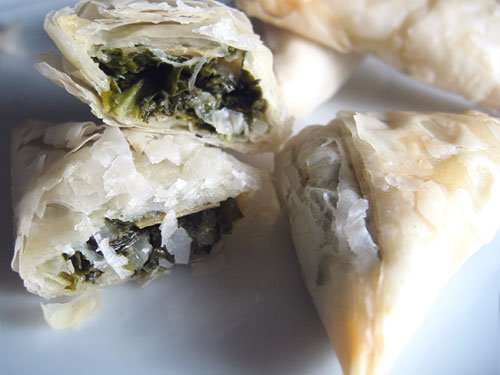 Heat 2 tablespoons of olive oil in large frying pan over moderate heat. Add spinach, cook until wilted. Remove from heat, let cool and drain in a colander, then squeeze spinach until all excess water comes out. Chop spinach. (Obviously, if you are using frozen chopped spinach, you can skip this step.)

Keep melted butter in small bowl with pastry brush nearby.

Lay flattened layer of phyllo pastry sheets on counter top and cover loosely with a damp (not wet, and certainly not "moist") towel.

Place 1 phyllo pastry sheet on cutting board. Brush with melted butter. Top with another phyllo sheet, brush with more butter, and add a third sheet pf phyllo pastry on top. Slice the buttered phyllo stack lengthwise into strips that are about 3" wide. Depending on the dimensions of your phyllo sheets, you will get 3 or 4 strips.

Spoon about 1 tablespoon of spinach and feta cheese filling at one end of a phyllo strip. Fold one corner of phyllo over the filling to the other edge to make a triangle. Fold the filling end over end up the strip like a flag. Put the finished phyllo tringle seam side down on the baking sheet and cover with another damp towel.

Continue this monotonous (but exciting!) process until all the filling is gone.

Right before baking, brush more melted butter on top of each phyllo triangle.

Bake triangles in middle of oven until golden brown, about 20 to 25 minutes. Transfer to a wire rack to cool, but don't wait too long to serve. They taste best when hot.

You can also make the spanakopita, and freeze them. Bake them straight from the freezer; just make sure to add about 10 minutes to the baking time.

« Cauliflower Gratin from Thomas Keller's Bouchon Cookbook - How a Book Can Breed a Diva
Jennie-O Oven Ready Turkey - Free Rider Economics, Free Bird and What to Do if Your Turkey is Still Frozen »