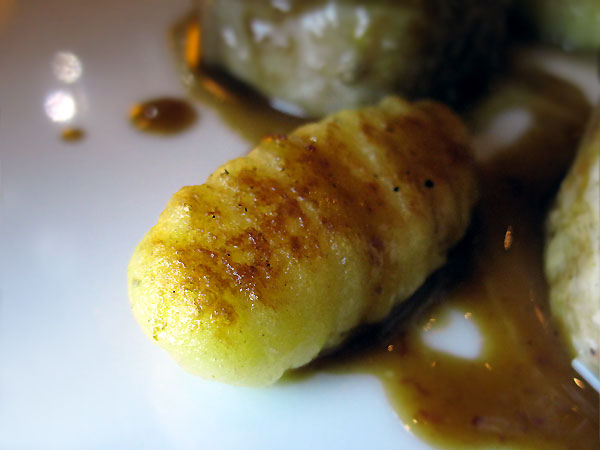 On 1) the bare naked heel of yesterday's post about free sample fruit, 2) the sassy though sensibly short kitten heel of last week's Los Angeles Times article about corporate shilling mommy bloggers, and 3) the long, lean ferocious 5" stiletto heel of the FTC's Disclosure policy, no, retraction/confusion/reinstatement/omgmakeitstop, I felt that the only responsible thing to do on this blog post was disclose that my bill for the La Scolca Wine Pairing Dinner at Fraiche Restaurant in Santa Monica last Sunday evening was "taken care of."

My bill for the La Scolca Wine Pairing Dinner at Fraiche Restaurant in Santa Monica last Sunday evening was "taken care of."

But after making that simple statement, I paused.

I had simply done my duty without doing much research beyond understanding that I should let people know when I haven't paid for a meal, a service, or other product for review, but I also hadn't thought about how I felt about the policy.

"How do I feel about this policy?" I asked myself.

The principle of disclosure began plaguing my thoughts, paralyzing my writing process.

I wondered about disclosure in the context of non-disclosure and whether the exclusion of comped-but-negative reviews is still a bias. That led to the general question of bias in reviews, then genuineness of the blogger, then integrity of blogging, then trust of the reader then eventually to ethics in writing overall, then, then, then finally, my entire thought process had exploded outside the realm of my little blogging mind and I was screaming out silently in my head, "How much am I supposed to disclose? How much?!"

Do I have to admit that yes, gommadit, I was unshowered and still in my pajamas when I agreed to take a comped meal at Fraiche! It was via email! I even had my grease-smudged glasses on!

My meal was comped but my date's was not!

Wait! No! It wasn't a date! We didn't even hold hands!

OMG do I have to tell this to the FTC?!

So there it is. You know everything. I've done my duty. I am no longer responsible for your actions, decisions, or opinions regarding Fraiche.

from Fraiche Restaurant: La Scolca is the benchmark for all Gavi wines. This is a rare opportunity to try aged Gavi’s made from their oldest and best sites on the estate. The Soldati family of Piemonte has been generous enough to send us wines with 5, 10, 15 and 20 years of age to taste the subtle changes over time that proves why the Cortese grape is deserving of DOCG status. Fraiche Restaurant is presenting two of these wine dinners, five courses paired with six wines, for $65 per person on November 15 (Santa Monica) and November 16 (Culver City). The menus are detailed below: 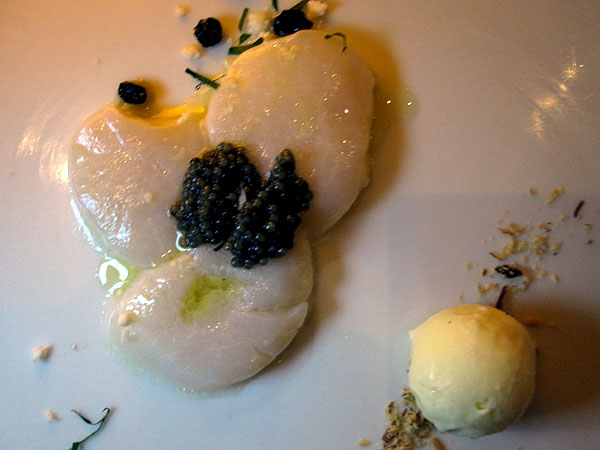 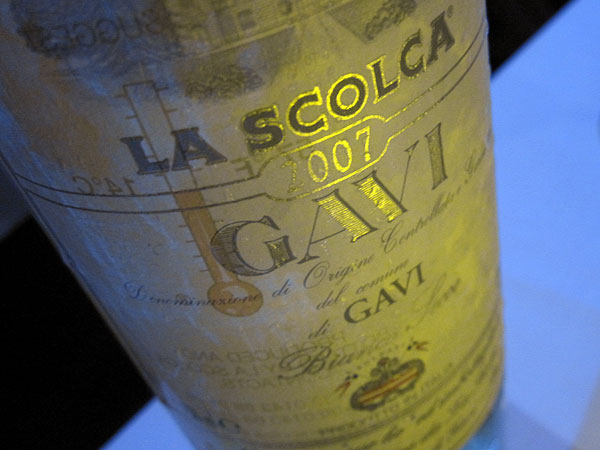 Scallops were tender and sweet. Cauliflower ice cream definitely tasted like cauliflower, but was icier than I usually like ice cream. Or cauliflower. The caviar was caviar. The wine was a good match, though my non-date date thought it was better paired with the next course, John Dory. 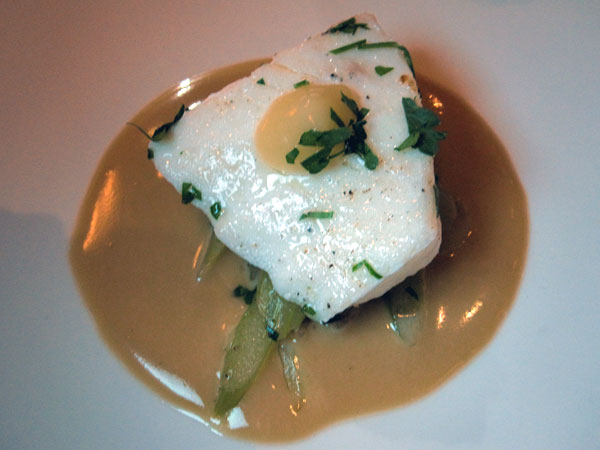 There were no potatoes, but I didn't really notice their absence nor the fish's presence because my sanity was destroyed by the clam jus - mild aroma of the ocean, aggressive salt of the sea. I am sure I embarrassed myself by scraping bread around the bowl to soak up every last molecule of the sauce.

Full disclosure: I do not know, have never had a conversation with John Dory. 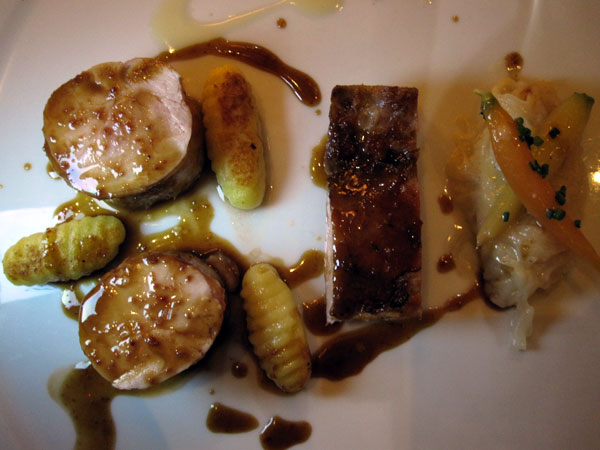 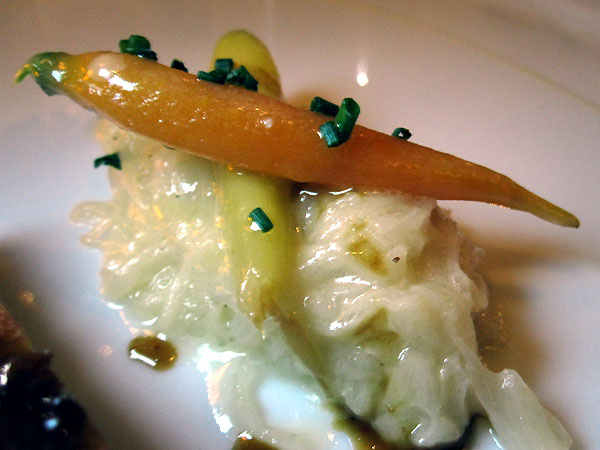 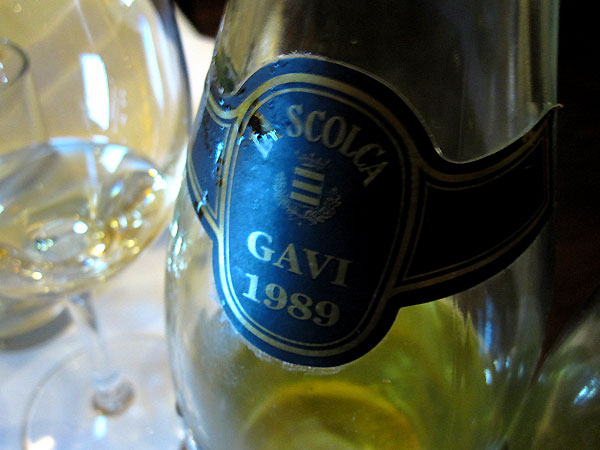 The abstract artwork presentation of the pheasant was not my style at all, so I cannot offer an unbiased review. Of how it looked. I can however, give you a very biased review of how the pheasant, gnocchi, carrots, and soubise tasted.

I was not fond of the composed kettle drums of fowl meat on the left side of the plate; the pheasant felt too dense under a knife and fork. The tiny brick of breast meat in the center of the plate with crisp skin was more suited to my taste and true to myself, I peeled off the skin and left the meat, along with most of the unfamiliar soubise on the plate.

I could have eaten a cereal bowl full of the sparkling carrots and sticky, swedish foam-pillow (semi) soft gnocchi with a tiny, barely bitter bit of toasting on two sides.

The two wines we sipped with this course were the same Black Label Gavi Dei Gavi, but from different years. There is no fucking way I am going to even attempt to describe the wines or how they paired with the food. 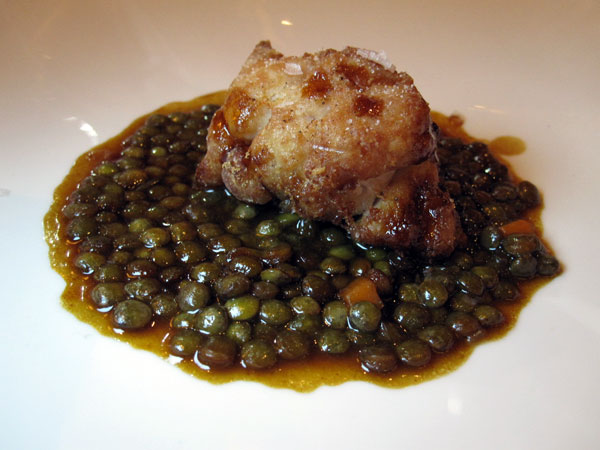 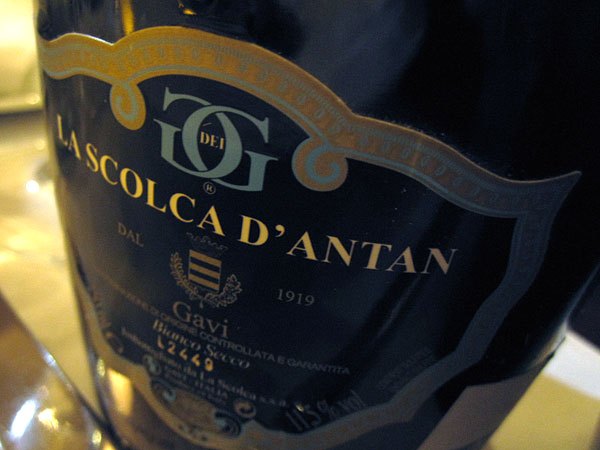 It is unfair, I know, but with a bias against internal organs, I dreaded the fourth, final savory course. Sweetbreads. While I understand the idea of light-to-heavy progression, something as scary as sweetbreads is better off early in the meal. Aside from the fact that they are pancreas or worse, some unidentified glands of lesser importance, I've never had a decent preparation (in my taste, at last), of sweetbreads. It was this latter point that actually gave me the confidence to give Fraiche's sweetbreads a chance.

"Chicken nugget" is exactly what I thought when I saw it, right before "Oh yeah, it's a giant fried gland." I took a bite and though I was not conscious of it, I am sure I held my breath. I am a child, I know, but at least I didn't close my eyes. It either worked or sweetbreads taste nothing like my imaginary recollection. It was a lovely light crisp exterior and, whether this is technically a good or bad thing, I have no idea, an interior that tasted nothing like glands. I am not entirely sure what I mean by that phrase, but it's definitely positive. Unfortunately, the thing on the plate that I thought I would love without a doubt, lentils, were hard, a disappointing loss in the sauce in which they sat.

Full disclosure: I was a bit buzzed by the fourth course. 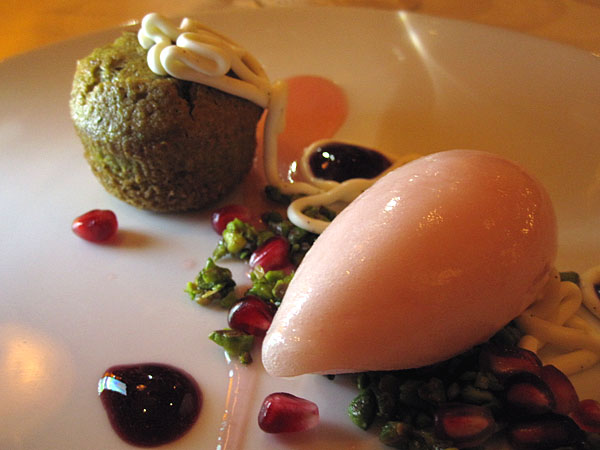 For all the courses, pairing with wine, sometimes two to a course, the attention to pacing, the unexpected flavors and textures, and artful presentations, I was a little surprised by what appeared to be a haphazard dessert centered around a muffin. The pistachio cake was dense, campari flavor on the plate a little too bitter, and the mascarpone "noodle" was visually unappealing. Whether it was relativity or reality, the pink teardrop of sorbet, though, was perfect. It could have owned the plate with nothing more than the pomegranates and crushed pistachios.

Full disclosure: How the hell are you supposed to eat pomegranate seeds?

Fuller disclosure: Do you or don't you spit the hard white thing out?!

Fullest disclosure: I spit the white things out. 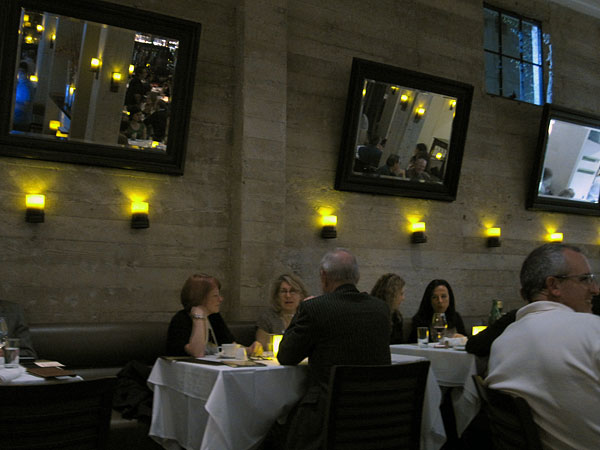 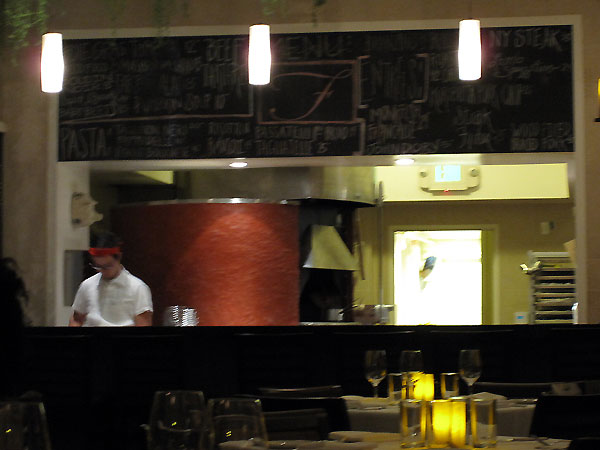 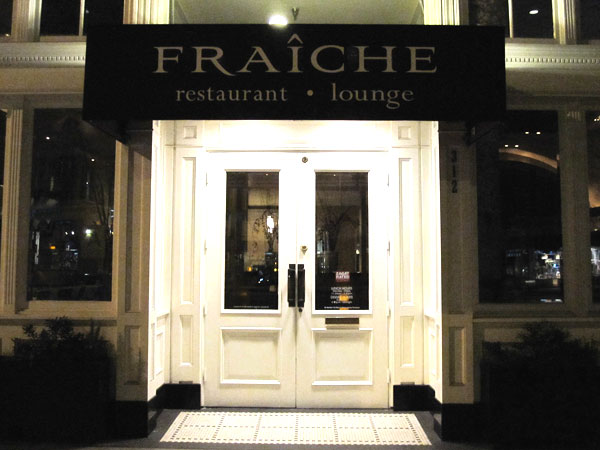 The Monday night dinner at Fraiche-Culver City (outlined below), with a heavier emphasis on seafood and a non-existent emphasis on internal land animal organs, appealed more to my senses, but I had been to the Culver City restaurant before. I just never blogged about that experience. I wasn't trying to hide anything from anyone. I'm just lazy.
-----

Pictures from a Previous Dinner at Fraiche, Culver City

Not La Scolca Wine Pairing Dinner. Not comped. Just, you know, dinner. It was back in 2007. 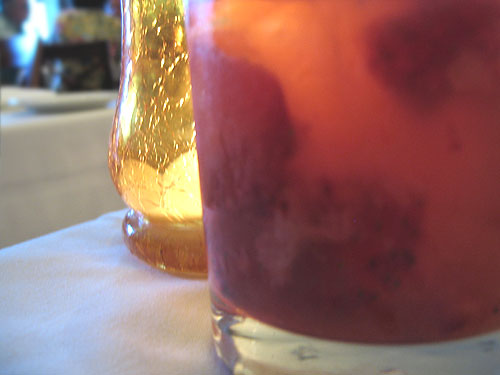 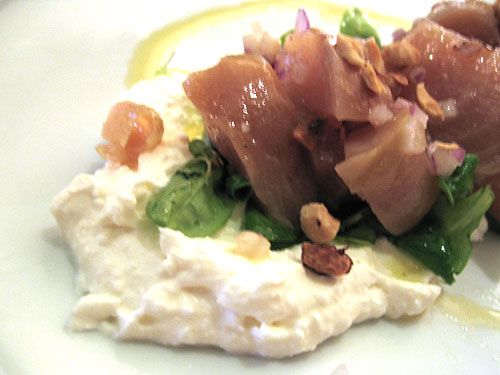 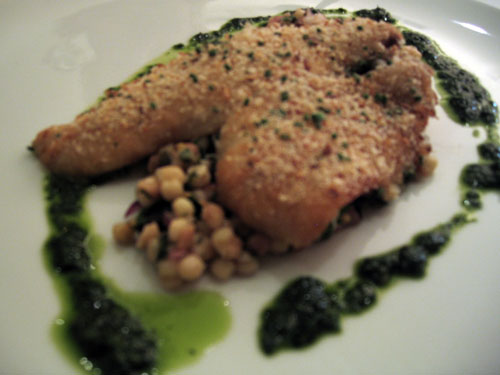 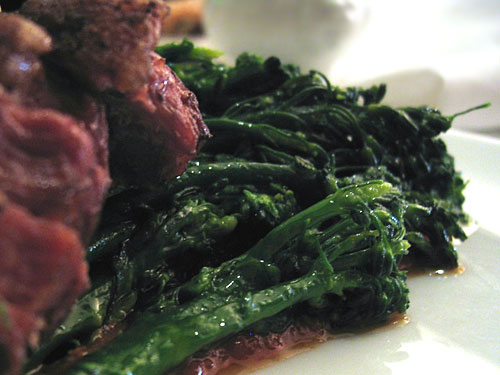 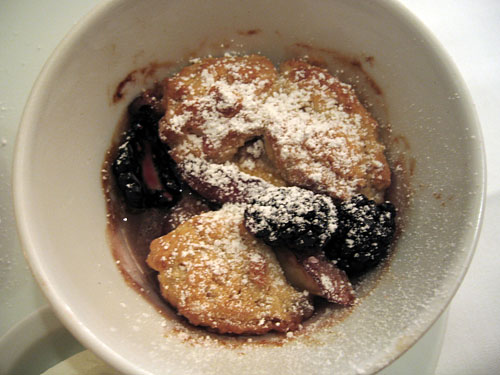