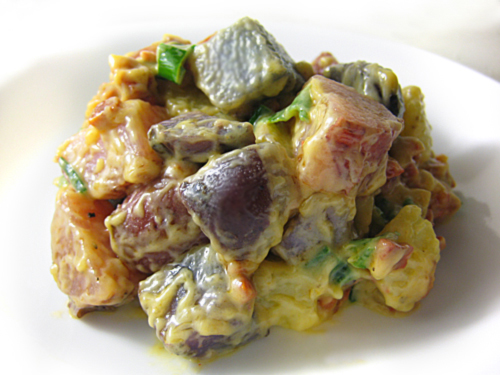 Mayonnaise by itself does, for lack of a more sophisticated phrase for a trailer trashy food anyway, gross me out, but I don't have a particularly strong opinion about the condiment in foods. Ordering a sandwich, "hold the mayo" is really just the combined resulting reflex reflecting years of body-conscious brainwashing and a need for a pseudo-sense of control. If mayo makes it onto my sandwich, I'll still eat it, only mildly irritated on the principle of not getting what I asked, not because I didn't actually want to eat mayo.

But he actually does not like mayo. I'm pretty sure that his muttering something about its texture like congealed slime indicates that he might hate mayo.

So when he unpacked a tiny tupperware of My Little Pony-esqe pink and purple potato salad to accompany my birthday dinner of barbecued ribs that had been de-ribbed so I could pretend to eat like a lady, I realized that he's a type of guy I rarely encounter. In the past, guys have presented me with...an iPod shuffle.

But he. He's the type of guy who gives gifts.

And the type who makes aioli from scratch.

If the challenge of making your own aioli is too daunting, substitute a store-bought mayo that has been mixed with minced garlic. The potato salad will taste about the same, but you will have to live with the shame of store bought mayo. Don't worry, it's not bad. I live with that kind of shame every day.

Whisk garlic, mustard, and egg yolk until egg yolk is thickened. Combine oils then add to egg yolk in a thin stream while whisking. Season with salt and pepper to taste. Stir in water a few drops at a time to manage consistency.

Simmer potatoes in water until tender, about 25 minutes. Let cool, then cut into ½“ pieces.

Combine potatoes, chorizo and green onions. Mix with enough aioli to coat the potatoes, about ¼ cup. Taste and adjust seasoning.

Keep potato salad chilled until serving. Use remaining aioli for something else.