Nothing, and I mean nothing, not even a fantastically feminine floral bridal shower with cute little cupcakes and tea, kicks ovaries into overdrive, pumping out all kinds of pink and yellow and lavender hormones that have girls exploding into high-speed, high-pitched Helly Kitty-esque giggles and itty-bitty “ooh!”s and “aah!”s like a...baby shower. Suddenly, all that is logical and reasonable gets tossed into your Balenciaga with your wallet and valet parking ticket, zipped up, and tossed into the corner, and even the most cynical, sarcastic and un-girlie girl will go bonkers over things that, under normal circumstances, would deserve at least three paragraphs of mocking on a blog. A diaper cake. 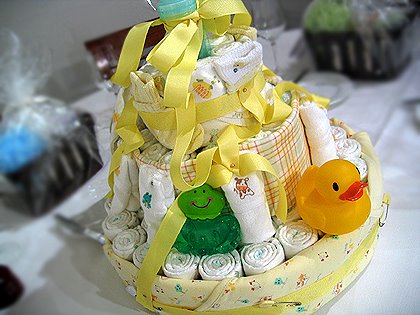 like a diaper bag exploded onto a wedding cake

That’s right, a diaper cake. It’s an entire garbage pail of rolled up diapers formed together with rubber bands and diaper pins into something that looks like a tiered wedding cake, decorated with all kinds of baby-related things: rubber duckies, bottles, rattles, stuffed animals, burping towels. The idea of a diaper cake as the centerpiece of our baby shower tablescapes, at first left me utterly speechless, but I have to admit, they were amazing. Enough to have me using a semi-homemade SandraLee-ism, “tablescape.”

We already had the baby (the little monkey is three months old now!), but the tornado that comes with a brand new baby niece hurled us past Thanksgiving, through the Holidays, and into a brand new year without any time to give all things natal they’re due spotlight. A Baby Shower at La Terza that kicked it all off certainly deserves its 15 minutes (or more) of fame.

so perfectly pink and cute

almost as good as an oscars favor

I had eaten dinner at La Terza before for dinner, and I couldn’t exactly fgure out how the place would work for a baby shower. Inside the uber-chic Orlando (The Orlando is a hotel, but like Madonna, the Donald, and Diddy, doesn’t need a last name identifier), La Terza is cool (both in attitude and temperature), dark at dinner time, and a bit loud. At 10:45, on a very cold, gray, misty Saturday morning in LA, we carefully scaled the staircase to La Terza’s 2nd floor, balancing each diaper cake along with department store shopping bags full of girlie spa party favors, and transformed a previously generic private room into something like a cross between Lisa Kline and Babies R Us.

As with any “event,” we had to pre-select a menu for brunch, and with any event, it’s not always easy to have a fair opinion of food that comes from a chaotic kitchen trying to gracefully turn out 30 of the same thing at the exact same time. Nonetheless, La Terza didn’t dare disappoint a roomful of raging hormones.

We started with a choice of either a Wild Mushroom Soup or a Tricolore Salad of Arugula, Fennel, and Radicchio. Other than fresh, the salad was unremarkable, but the wild mushoom soup was, at first, slightly disconcerting. In an effort to present plates to each person in perfect synchronization, the staff had rushed, and the soup had sloshed up all over the sides of the bowl, leaving a messy halo as if a waitress in a greasy diner had dropped off a bowl on her way to deliver a cherry pie to table across the room. The soup was also an odd olive drab color, and with swirls of olive oil floating on top, looked like creepy culinary desert camouflage. Despite its deceptively unattractive appearance, the soup was luxuriously thick and creamy and full of mushroom flavor.

tricolore with chicken makes an entree

It’s brunch, so we had the expected breakfast-y item, a Sausage Frittate with Tomato Bruschetta. Unlike the soup, which had a taste that betrayed its rather homely facade, the sausage frittata lived up to its strange, kitchen sponge-like appearance – it was bland, had an odd texture that was at once airy and rubbery, and the sausages were few and far between. The bruschetta was a pile of tiny, fresh tomatoes on a thin slice of toasted bread, but I felt bad that we were paying a generous amount for anyone who ordered a sponge.

It may have been brunch, but it was also a room full of women, so we had to offer a salad. The Warm Chicken Salad was nothing more than a larger portion of the starter tri colore salad, tossed with chicken. Like the starter salad, it was unremarkable. The winner of the entree choices was Eggplant Lasagne, presented in individual towers of thin, unobtrusive pasta, an eggplant- and tomato-based sauce, oozy bubbly crisp cheese, and most notably, if you hadn’t caught on from the deep-fried basil leaf garnish and bright kelly green basil oil decoratively added to the plate, very large pieces of basil. The lasagne was good. Aside from it being lasagne, I loved the fact that it seemed the emphasis was much less on the pasta and much more on everything else.

bitter because i guessed too big

Of course, we had chosen the menu, forgetting that about 25% of the guests would be bringing their own children. As I have now learned, bowls of ugly green soups don’t cut it with kids. Neither do salads, nor anything resembling a vegetable, for that matter (which is why the lasagne with a big, shiny leaf on it was utterly unacceptable). The kitchen was gracious enough to make spaghetti with plain tomato sauce and grilled cheese sandwiches. Hey, Gino Angelini is no Chef Boyardee, but I think La Terza did okay with the Under-Five crowd.

Overall, the food at La Terza wasn’t bad for an event. Foodwise, my delicious self had been happier during my dinner there (which I am certain to do again), but a baby shower isn’t so much about the food as it is about the diaper cake. And the I’m sure I was the most sensitive person to the menu and the food there, but then again, I may have been biased negatively because I didn’t win a single baby shower game. :)