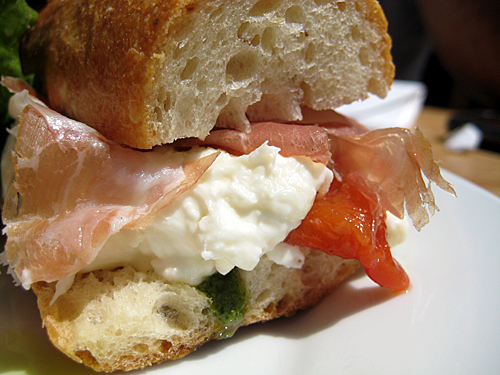 I don’t remember the physical or psychological context in which my totally serious response to a now forgotten question was “Tombstone.”

The question most certainly had nothing to do with pizza (as we will eventually learn), so maybe he had asked me what movies I like, you know, as one of the standard “getting to know you” questions that are scientifically proven to be 39-dimensionally, harmoniously reliable in gauging compatibility.

“Such a great movie. I love it!” was my follow-up validation. He laughed, but something about the tone — because a laugh can have “tone,” yes it can, I’m not just paranoid — made me think it was not one of those “omgwtflol, me too!” laughs. It was more like he was laughing...at me? Around me? In spite of me? Is “in spite of” part of the preposition test?

I must have looked confused or concerned or something other than my usual stunningly confident self because he stopped, caught himself I guess, and felt he needed to explain.

Tombstone is not a movie that a “movie person” would ever say was a good movie.

He was a movie person.

I kept my second favorite line from the movie to myself.

Back then, I never said anything about being a “movie person” when he picked Talladega Nights for us to watch together or when he fell asleep during La Vie en Rose. 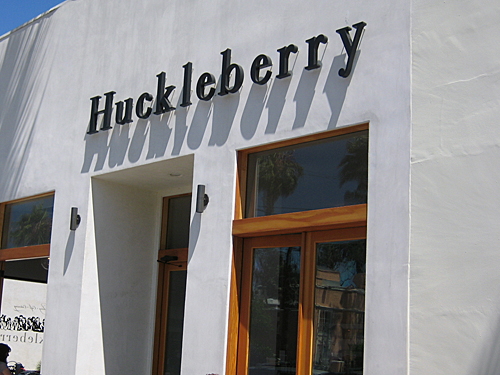 Though the Tombstone exchange was a long time ago, I am actually quite shocked that I hadn't thought about That One until I recently had lunch for the first time at Huckleberry Cafe in Santa Monica with This One. The old me would have avoided Huckleberry as long as I could because of a totally unassociated association: "I'm your Huckle...Tombsto...Oh, yeah...Fuck Huckleberry." The new me would...

...do the exact same thing!

Except that I just forgot about it. 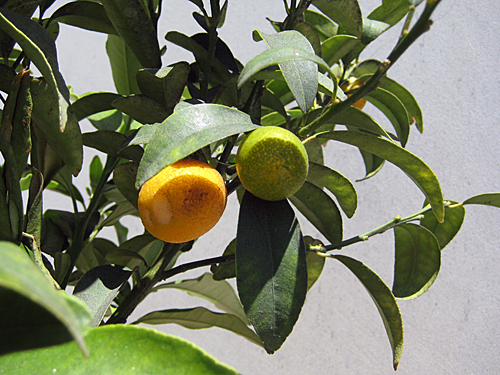 I love everything about Huckleberry, the place, partly just because it felt familiar. I had a deja vu moment when I walked through the front door. Huckleberry has almost the exact same look and feel of one of my favorite places, Clementine in Century City, except that citrus is in potted plants out front, not in the name. 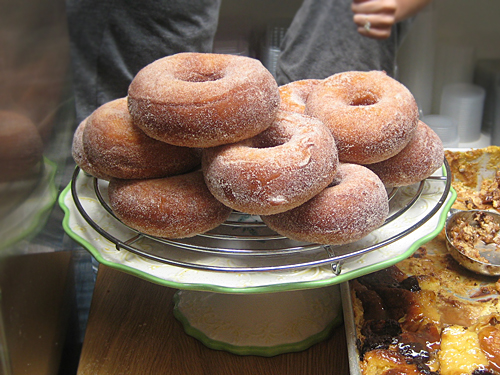 More, though, Huckleberry just has its own home style — simple, clean white exterior; rustic, handwritten, homemade feel of menus and signs; wide-open, welcoming front windows and doors; casual counter service; cookies, cupcakes and donuts stacked on plates the way they might be on the countertop at Mrs. I's across the street (sorry, that was a personal memory of a neighbor from my childhood); seemingly relaxed vibe of the people inside both behind and in front of the counter; and even wobbly table and chairs on the sidewalk out front. 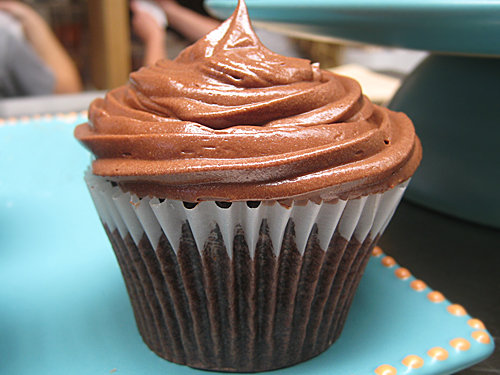 I also like everything about Huckleberry's food, or at least the guiding philosophy of the food. The restaurant is the very definition of every word in the hipster "foodie" *does the sign of the cross* dictionary. Local. Seasonal. My favorite, Market-driven. Obviously though, these are not the parts of the core idea to which I am attracted. I like that all the food is just real. They I did my fair share of no research before going to the cafe, so I have no idea why pastry chef Zoe Nathan and Rustic Canyon restaurateur husband Josh Loeb chose the name Huckleberry, but I suspect it wasn't at random. Huckleberry. The fruit, like the Finn, like this cafe in Santa Monica, is all-American. 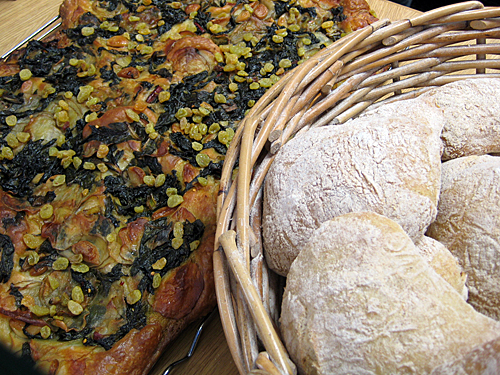 When we — "we" being This One, not That One, and I — stopped in at a time well past the normal weekend brunch/lunch rush hour, Huckleberry was still full but not crowded. There were just a few people sliding along the counter in front of the pastries, pointing, pondering, and calling out final choices over the glass. 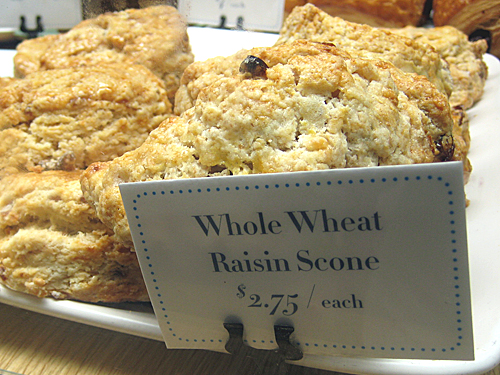 No chaos, no line, and yet, as we approached the counter, an ever so slightly uncomfortable feeling floated up from my stomach and gently took over my senses. Nerves. Anxiety. It was that familiar feeling that comes from unfamiliarity, which most normal people simply register, process, and remedy, but other psycho maladjusted people like me internally experience in the most negative way possible and in a restaurant environment, externally express as the inability to order. As I said, I did not do research before going to Huckleberry; like the good food blogger I am not, I didn't memorize the menu off the website and identify all the "must haves" from various online guerrilla recon resources. I was not prepared. 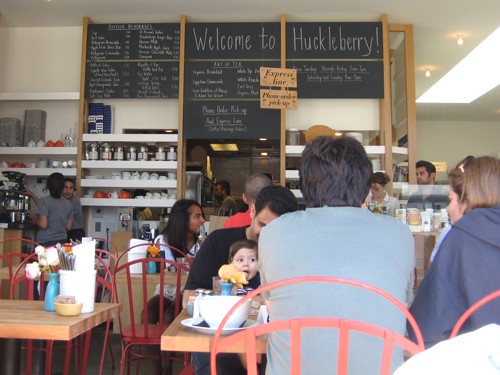 The paper menu overwhelmed me. As I stood there in front of the counter, I couldn't read through the choices fast enough. I was confused by offerings on the chalkboards overhead. I kept looking up at the chalkboards, then down at the menu in my hand. Up at the chalkboard, then down at the menu. Up chalkboard. Down menu. Up. Down. Were the dishes the same as what was on the paper? Were there duplicates? What about all the pastries behind the glass? There were only a few people behind us, but in my imagination, it was a long queue, breathing angry impatience down my neck, daring me to make the wrong choice under the pressure. I hemmed. I hawed. I couldn't make a decision.

I was fucking paralyzed.

He gently turned the menu in my hand toward him, scanned it, and ordered a sandwich. For us to share.

I could have proposed to him. Right there at the counter of Huckleberry, I could have asked him, "Marry me."

Maybe it was a little early for that. 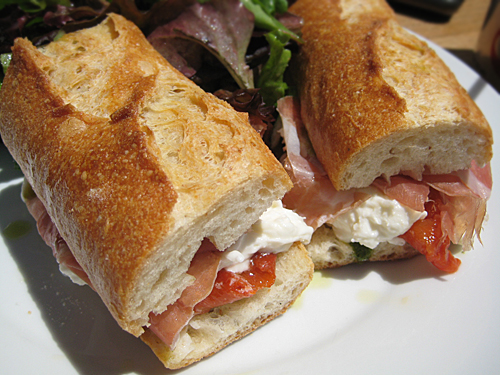 After such painstaking internal deliberations with myself, I needed to be away from the typical cafe din inside. We sat outside on the front sidewalk. The sky was clear, the sun was bright, and the air felt fresh. Even though my blood pressure has never been a problem, if it were and had been sent spiralling upward, it would have been on a slow but steady decline. What little stress lingered after that completely melted away when our order arrived at the table and I caught sight of paper-thin, almost wispy edges of prosciutto peeking out like a petticoat from under the baguette top. I couldn't stop myself from snatching the top away to expose the inside of the sandwich. 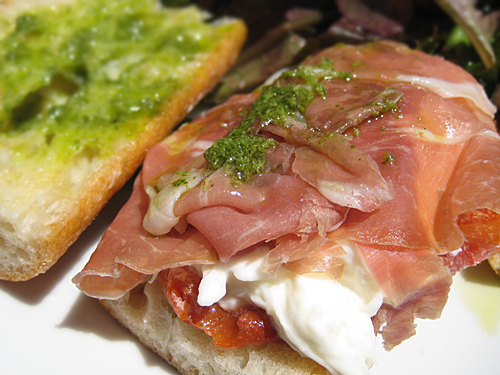 I used to avoid sandwiches in every situation, always opting instead for something, anything else, that didn't force multiple flavors in each, single bite. I don't love taking bites of food that have more than one distinct flavor at a time. Then I realized that I could eat a sandwich "deconstructed." I peeled off and ate each feathery layer of prosciutto from my half of Huckleberry's sandwich with my fingers, scraped up every bump of burrata with a fork, and pulled peppers glittering with basil pesto off the bread with my teeth.

Isn't that a daisy.

Who Else Is Your Huckleberry?