Gradually, I am making my way through those silly promises I made to myself at the beginning of this year. Remember those? Yeah, resolutions, which most people forgot by the second week of January. Given that I probably won’t fully accomplish any of them, I’m hoping to at least attempt accomplishing some of them before I completely throw them out the window. Slow and steady wins the race, I tell myself.

On the original list, number 6 is “Finish what I start,” which includes the mini-project with which I challenged myself at the beginning of last year. I call it Lost in Translation. I said I’d get through all the restaurants along Sawtelle Boulevard, a little strip in West LA affectionately known simply as “Sawtelle” to those in the know. Yes, Sawtelle Boulevard, running from Santa Monica Boulevard to the north, and culminating in one big glorious collection of plazas at Olympic Boulevard to the south, is cutely fruitly, Japanime joint after Giant robot after ramen house.

Nestled in the folds of the majority Japanese restaurants and stores however, are an occasional Chinese restaurant or Taiwanese boba cafe. Yes, what was once almost all Japanese is now being invaded by the other Asians. Sawtelle isn’t Little Tokyo West anymore. When once the strip was a little piece of Osaka, it is now simply a mélange à trois, if you will, and oh, I know you will – of obviously Japanese, less obvious but still securely Chinese, and what seems to be a secretly disguised infiltration by…the Koreans.

There is no outwardly Korean restaurant with a Sawtelle address. You see, the Koreans are coming in via the back door. A restaurant that serves Korean soon doo-boo isn’t named one of those very obviously Korean restaurant names like Jin-joo Doo-boo, or even something English that is clearly indicative of Korea, like Korea Secret Seoul Tofu Garden. It is called Tofu-ya, which uses the Japanese “ya” to mean “place that serves,” like yakitori-ya is a place that serves yakitori. “Ya!” in Korean, if I remember correctly from my hahn-gul hahg-gyo (Korean language school, for y’all laypeeps) days, means “Hey, stupid ho!”

I’m not sure why such is the situation on Sawtelle. I sense that perhaps Koreans in LA have a bit of an inferiority complex when it comes to their food, with Japanese cuisine being so highly touted these days. No one really pays attention to Korean food (even though I am convinced that 2006 will be the year of galbee). Why can’t Koreans just be proud of their fetid, stinky kimchee? Why must they hide and try to integrate themselves into another culture instead of really nurturing the beauty of their own heritage? Why do they have to hide behind Anglicized names, plastic surgery, tattooed makeup, mystic tanning, highlights, and a circle of “white friends?!?!” Oh, um, never mind.

The point of my original post is that, with the exception of the places that closed too soon before I had a chance to try them, as well as Curry House simply because I am loyal to Hurry Curry, I’ve tried just about every restaurant on the strip. I just haven’t written about all of them. Now I can check Mizu 212 off the list. Shabu shabu house, Mizu 212, like many of those restaurants on Sawtelle, is owned by Koreans. What does that mean? Nothing really, except that it now ties two seemingly unrelated ideas together. Eating along Sawtelle and Koreans.

I am no stranger to Mizu 212, but this was my first time back in a long time. I probably went a half-dozen times within the first three months of its opening, but after that, only once every 18 months or so on average (not to sound like I’m trainspotting or anything). It was nice that shabu shabu was available, but somehow I felt cheated, paying $20 for something that I grew up eating out of a trendy-for-the-70s mustard yellow Sunbeam electric skillet in the center of our beige Formica-topped table. $20. Ouch. Let me put it in a less Asian way. It’d be like paying $20 for a peanut butter and jelly sandwich, that doesn’t even come with a happy ending.

We went to Mizu 212 because my sister was having a craving for shabu shabu, which I couldn’t quite understand. It’s not that I don’t like shabu shabu, it’s just that, again, we ate a lot of it, albeit a Koreanized version of it, growing up, so much to the point where my total lifetime quota of shabu shabu was fulfilled by the age of 10. (Oh damn, there it is again! Koreans trying to be Japanese!). I’ve had enough, so I don’t crave it, but I certainly don’t mind eating it. My sister and I grew up in the same house and yet, she still craves the stuff as if she had only eaten it twice in her life and it consisted of wildly exotic ingredients that are too difficult to find on her own. I am sure she eats vegetables, beef, and tofu on a fairly regular basis. But we went there because this time we had a large enough group that could, by majority rule, override Jimmy’s protests that he doesn’t like the stuff.

Jimmy’s argument is that he doesn’t like to go out to eat and pay for service when he ends up doing all the work cooking. I understand his point, but it is also difficult for someone who enjoys cooking to really understand his feelings. However, it goes beyond merely an objection to “paying to cook my own food.” At the risk of starting a family feud or worse (better?) yet getting myself blackballed from all future family food outings for such gross oversimplification, I am going to say that Jimmy’s food and taste preferences go back to the all-American ballpark. It’s not all-American “sports,” since baseball isn’t a real sport. ;) Anyway, they key word is “all-American.”

You see, although he looks Korean on the outside and can speak to my parents in fluent Korean (they speak to him in English), Jimmy is the most all-American Richie Cunningham sunny southern California white-bread (literally) guy I know. Yes, I said “white-bread” because when he eats a sandwich, Jimmy proudly requests Wonder White. For goodness’ sake, we could even narrow Jimmy down to being a life-time Westsider since he was born with Tito’s Tacos in his mouth at Santa Monica UCLA Medical Center, we’ve driven by his elementary school in West LA, and he grew up in a house just north of UCLA. Jimmy didn’t attend UCLA, but he is still a successful product of The System (Go Bears!). You know, because Cal being a better school and all might have increased his chances at becoming President of the United States some day ;)

In addition to the invisible red, white and blue full-body tattoo, Jimmy has an unrivaled fanatacism for sports, which I have mentioned before in a post about fantasy leagues. If the wedding slideshow photo of him in complete football gear really wasn’t one of those $25 dressed up Glamour shots ;), then yes, Jimmy played sports in high school, he “played” IM sports in college, and even played kickball in Korea with a team that was named something that makes me roll on the floor with Koreanized English haiku laughter, the Thumbs. Oops! Did I say kickball? I meant t-ball. Go, Thumbs! LOL! It is in this utter sports-driven fantasy world that Jimmy eats his meals like he’s at Dodger Stadium, even when we’re at an extravagant seafood brunch buffet – French fries and corn dogs. I am quite certain that we somehow faked left, faked right, and scored Jimmy at Mizu 212 by leaving off the boiling point of water in Fahrenheit and simply saying we were going to “Mizu.” It sounds just like “Mizzou.” If you’re into college sports, the way Jimmy is into sports, then you know that the Tigers didn’t even earn an invitation to Prince Charming’s NCAA Ball this year ;)

Though Mizu 212 has a few tables, which I always find are far more conducive to enjoyable meal-time conversation for a group of more than two, they were all taken by the time we got there, so we were relegated to sitting side-by-side at the bar across from Felix the Cat. The server behind the bar turned on the small burners built into the bar top in front of each of our seats, and made sure that each stainless steel pot was filled with liquid. The menu is straighforward, offering beef, chicken, seafood, and vegetarian shabu shabu dinners, as well as any of the items a la carte. Now, if it were up to my sister, who is the consummate carnivore, she would have made two orders of a la carte beef for herself, but I don’t think Mizu 212 allows that. We ordered, and Jimmy launched into why shabu shabu is an expensive sham. 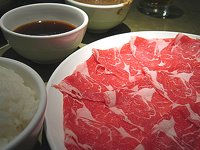 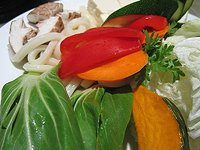 if you’re starved, eat them raw

There is some preparation of the ingredients involved, but I can’t imagine that it takes too much effort to arrange vegetables and frozen sliced beef on a plate. Our food took an unusually long time to come from the kitchen. Of course, it’s not even ready to eat; we still have to cook it. By this time, in my hunger-induced haze, I was finding myself siding with Jimmy on shabu shabu. Our conversation quieted and each of us focused on the culinary task at hand.

The food doesn’t take long to cook. It’s always a good idea, from my experience, to dump most of the vegetables into the boiling water right away, since they take a little longer to get tender. Of course, at Mizu, I ate the sweet red bell peppers and carrots raw as a salad because I was starved. Meats, however, are sliced paper-thin, so they simply require a momentary “swish” around the boiling water before they’re cooked. 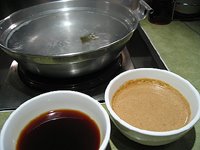 Mizu offers the standard dipping sauces for shabu shabu. After retrieving the cooked meat or vegetables from their bubbling bath, my preference is for the light, thin ponzu sauce. The thick, sweet sesame sauce, I am convinced, is laced with Jif. But don’t quote me on that.

There are small plastic containers of grated radish, chopped scallions, and minced garlic at each place setting. I have never figured out what the proper Japanese use of these condiments/garnishes are. It might send some Japanese shabu shabu connoisseurs into cardiac arrest, but I turn the plastic containers over on their sides and dump enormous spoonfuls of the garlic and scallions into the boiling water as if I were creating the base for some deliciously flavorful Korean soup. If it’s wrong, I sooo don’t want to be right, because I always ask for a spoon so I can lovingly sip “soup” right out of that pot at the very end. If they had hot sauce, I would add that, too, but I have asked before and Mizu doesn’t have any. That’s strange, since the place is owned by Koreans. What kind of Korean doesn’t have hot sauce hidden back there on the bottom shelf of the fridge?!?!

Shabu shabu is a very clean, refreshing meal, but it’ll probably be another 18-24 months before I go back to Mizu 212, if at all. There are a few more shabu shabu restaurants that have opened up in West LA in recent years that aren’t quite as expensive, and feel warmer than the stark zen stone and metal decor of Mizu. Besides, maybe Jimmy is right. If I’m going to cook it myself, I may as well perpetrate Japanese in the privacy of my own home with the mustard yellow Sunbeam electric skillet I inherited from Mom.

« The Inner Circle is on the Patio - Don Antonio's
EDD, Unemployment, and Beef with Yellow Chives »