Back when I was working as an ooh-la-la business strategy consultant for BFD Consulting (Big F**kin’ Deal) firm, many of my projects were systems integrations, which meant that BFD charged outrageously expensive rates to clueless clients for a team of just-as-clueless-except-12-weeks-of-“training”-in-Chicago college recruits-in-cheap-suits to build and integrate some sort of sexy, savvy, sophisticated system into their company that would…add purchase order sub-totals. We never thought to tell the clients that, you know, maybe they should just use calculators and save 1.2 million dollars over 18 months.

Though the projects were almost always systems integrations, they came in different flavors and sizes, based on how good an Account Executive could sell wholly unnecessary phases and project team members. One such flavor was the Package Evaluation and Selection, or PES, because BFD loved TLAs, AKA “Three Letter Acronyms.” Clueless Client would come to BFD with no idea what they needed (which rang up giant dollar signs in the Account Executive’s eyes). We would do the PES in order to find out what the problem was, and then find a software match for them that would be perfectly compatible in every way with, of course, a few vey necessary, very expensive BFD customizations. Don’t know what you want? We’ll tell you what you want and, find it.

One of the preliminary deliverables out of the PES was a list of requirements. This was a massive spreadsheet (or “database,” if we were trying to impress the client) that listed every single feature and function that Clueless Client wanted out of their new system, in explicit, expensive, hourly-rated detail. This was called The Checklist. I loved The Checklist because I am, as you know, a list-icious kind of girl.

During the Package Evaluation and Selection, The Checklist was the standard against which we would measure a short-list of software – Oracle, PeopleSoft, SAP. The parameters on The Checklist were prioritized, some things are simply Nice to Have, others are Important but not urgent, and most things are Dealbreakers. We would do a Gap Analysis and have pretty reports decorated with Harvey balls. Web-based interface? Check! (That was a Harvey ball, filled in solid, like on a standardized test). Accounting module that interfaces with legacy system? Sort of. (That was a yin-yang Harvey ball.) Comes in a Hello Kitty pink and white version? No. (Empty Harvey ball.)

To this day, I cannot say “fill in the Harvey balls” without smiling.

Every day from 7 am to 10 pm for two weeks, we’d be locked up in a tiny, windowless conference room in the multinational Clueless Client’s San Francisco office, going through The Checklist in excruciatingly painful, one-by-one Harvey-ball-filling detail for every software package until we found the software package for whom every Harvey ball on The Checklist was filled in black. Until we found the “software solution for your business problem” that met every single criterion on The Checklist. Every one of those 29 dimensions of compatibility.

Strangely enough, not a single package ever had that Enterprise Hello Kitty edition version 2.0.

And after we found The One, we integrated the s**t out of it.

People, too have The Checklist.

Most normal people keep a mental inventory of the physical features and personal attributes that are required in a member of the opposite sex who is under serious consideration for “significant other.” Like the PES Checklist, some features and functionalities are higher priority than others. Some are absolutely critical (college degree), some are important but can be ignored for the time being with a manual “workaround” (parents married, to each other), and others are “Nice to Haves” (has a high-paying job). But, they are still part of The Checklist.

I will admit it. I have The Checklist. I have always had it.

Over the years, minor details on the list have changed. Certain things change merely in “flavor” – blonde became brunette and blue eyes became brown, then blue again. Other things get added or subtracted – now I care about stability, and don’t even think about type of car. Others simply move up or down in priority or intensity – it used to be “reads the New York Times,” but now it’s just “reads.” For the most part, though, the entire package that makes up The Checklist remains consistent.

The Checklist is a great thing to keep squirreled away in your internal FileMaker Pro.

Strangely, every guy I have ever dated or in whom I have ever been even remotely interested, has never fit The Checklist.

Because let’s face it, when it comes down to those two hot, steamy weeks locked in your bedroom with nothing but a Power Point and empty Harvey balls everywhere, The Checklist gets lost between the sheets and the only thing that really matters has nothing to do with a Gap Analysis, Old Navy or otherwise, and everything to do with…chemistry. Biochemical, exothermic, physiological organic orgasmic bi-oooOOOooo-chemistry.

Sadly, chemistry is hard to explain to everyone else who is interested in daytime soaps, reality television, Oprah, and your life, especially parents. Parents love The Checklist-smashing guys. They like Ivy league – check! Professional career- check! Dockers and Polos – check! Because, come on Sarah, he totally fits your checklist! He’s perfect for you! He has big black Harvey Balls written all over him!

You have to agree with everyone. He meets the requirements. He is The Package under their Evaluation.

But you know what?

Now that you think about it, they weren’t even using your Checklist! They were using their Checklist! wtf?!?!

And you know what else? 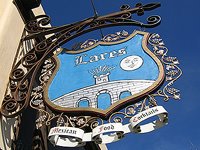 fancy that - fits the checklist

If there is no red hot chemical reaction that sucks up air and explodes into blazing, steaming, fiery precipitous love spew…well, you may as well go and install Microsoft Office, Enterprise edition, yourself.

Lares on Pico Boulevard in Santa Monica fills in The Checklist like a champ. Lares fits everything that I love about a restaurant: Mexican food, close enough that when I feel the urge or the craving, it’s only a few minutes away, reasonably priced so I don’t have to empty my wallet, and best of all, it has balls.

Meatballs, that is. In soup.

But, there was no chemistry.

Lares and I had no wildly explosive moment. None. I didn’t feel anything. It didn’t even have to be a raging inferno; a spark would have been enough to at least capture my attention for a second, or maybe two minutes. But Lares didn’t do it for me. The food was good. We plowed through an entire basket of chips. We asked for more salsa. Twice. We finished every gloopy globule of refried beans, every grain of tomato-tinted al dente rice, every tender shred of carne asada.

shiny shiny, but no sparks

But there was nothing that made me think “Oh. Oh me, oh MY.” Nothing made me want to scream my head off in complete and utter ecstatisfaction.

I enjoyed the balls. Don’t get me wrong. But you know, I always enjoy balls, no matter where I am. ;)

** a year ago today, the only full face picture of sarah you will ever see **