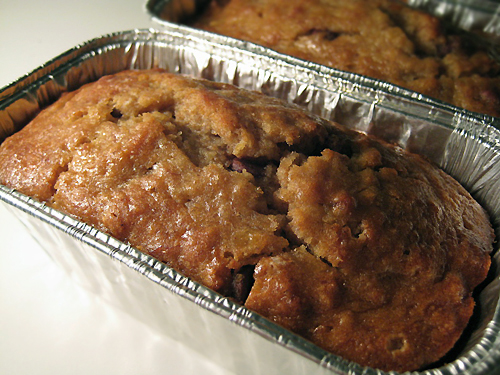 Bananas aren't a fruit that typically excites the senses or moves people in a profound way, if in any way at all. Hell, fruit in general doesn't do that. Except maybe a lychee. Lychees do something quite unnatural to me that makes me feel shameful and dirty, but that’s a different blog post.

I don’t know anyone who actually likes bananas, anyone who actually likes to eat bananas, anyone who actually likes the taste and texture of the slimy soft, sometimes stringy fruit that leaves a strange, powdery-yet-wet residue on the tongue and teeth. But every time you’re tearing through the grocery produce section, nature’s version of elementary school bus safety yellow catches your eye and stimulates a conditioned response. You slow down. And though the words may not make their way in literal format to your mouth, “we should get bananas” stirs in your subconscious. You don’t really know why you should get bananas, you just know you should. It’s just known. Should. Supposed to.

It’s just one of those things in life that people should do.

Today, though, I’m finding myself a little less apathetic about bananas. Staring at a screen full of photos of blackened bananas and the browned, caramel glossy topped banana bread with deep, dark cracks and tiny craters spilling over with half melted mini chocolate chips that they became, I found myself…affected. I took those photos a year ago.

It was after the birthday trip up to the mountains. 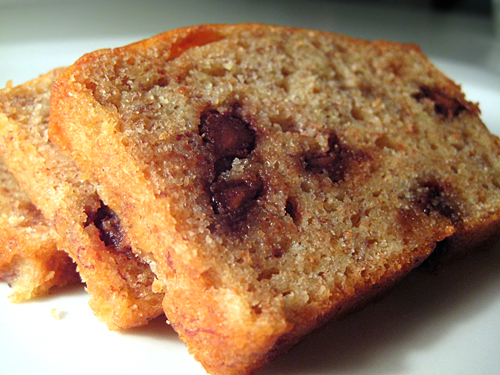 On our way up to the cabin, we stopped at the market and bought, among other things, bananas. They weren’t on any grocery list, but they probably looked too perfect to pass up and hell, we’re up in the mountains! We should buy bananas for nutrition or something, right? The bananas were long, a little unnatural in how straight they were, beautiful in their own, suspiciously perfect way. They were a little green, but they would ripen in time.

With places to dine out in the small mountain town, other things to eat from the kitchen adorned with small black and white Brother labels that identified everything from cupboards with “pots and pans” to “kitchen light,” and the fact that vacations are a time to eat junk food, the bananas were left untouched. They moved from laying sprawled out bare on the table, to awkwardly nesting their curiously long, straight, hard bodies in a large mixing bowl, to the '70s formica countertop, trying to find their place.

On the last day, like the responsible vacation renters we were, we tidied up, took out the trash, checked the showers, peeked under the sofa cushions, and emptied the refrigerator. The bananas were still on the table. Bananas are cheap – quite literally, a little more than a dime a dozen. The first instinct was to throw them out with the rest of the food that just wasn't worth our effort to take back down the mountain, but I don't work that way. Whether by culture or necessity, it hurts my heart to waste. I can’t just throw things away, especially things that seem perfectly good.

The bananas came back home with us.

I put the untouched bananas on the kitchen countertop. Every day for the first few days, I saw the bananas and reminded myself to look for that banana bread recipe — that one, the one that I loved from whatyearwasthat, hm, I can't remember — but I didn't look. So many other things came up. I was making excuses. "Life stuff" was moving faster, yet in a strange way, more slowly, than I could manage. I wasn't ignoring the bananas; they were there and I saw them every day, rotting right before my eyes. I think I was trying to ignore having to do something about them. I didn't want to deal with them.

You can ignore the black, spotted bananas that are practically camouflaged against the dark granite countertop for as long as you can, but something will eventually force your hand. Maybe you pick up the bananas off the counter to make room for a bowl and the skins shred apart from the stems under the weight of decay. Maybe you find that banana bread recipe while looking for something else.

Maybe you finally find hard evidence of lies and dishonesty that confirm what was just suspicion that laid black and heavy on your heart for months. 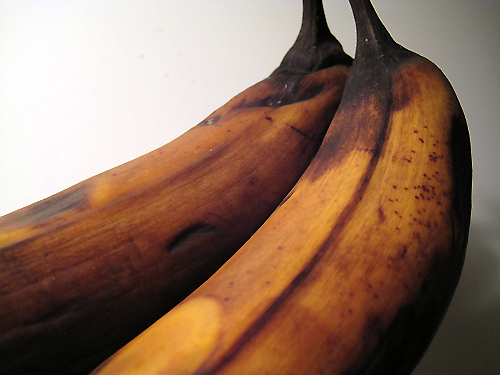 Bananas may not actually be, but are marketed as, Quite Possibly the World’s Perfect Food. They had decomposed to just the point at which only by some act of God they could be salvaged, were stripped open, scraped from its skin, shredded, pounded and mashed into a slimy, pulpy mess, hurled into a floury fray, but finally, emerged from the heat, beautifully transformed.

This past year was one of the most uncomfortable, painful, hard, difficult, emotional, dramatic, heart-wrenching years I've lived through, but I think I've finally emerged from the heat.

I may not be beautifully transformed, but at least I'll get a blog post or two out of it.

Divide batter among loaf pans and bake for 33-35 minutes or until deeply golden brown and toothpick inserted into center comes out clean.