This is the first quiet moment alone I’ve had in weeks.

Actually, if we don’t count the brief 25 minutes I had to myself in a cab on the way to a conference downtown, it's been longer than that.

Oh sure, there have been plenty of “quiet” moments. There have been a few “alone” moments, too, but it’s never been quiet and alone at the same time. It can be quiet for hours except for the sound and fury of fingers on keyboards when the two of us are crammed into out tiny home office. There have been quiet moments at the end of a workday, both of us collapsed onto the couch. We don't say much, if anything at all, staring over the tops of our wine glasses at the screen of a TV that isn’t even on.

The "alone" moments don't happen as frequently, but they do happen. There have been moments I’ve been physically alone because he’s away traveling for business, or off working the market for the afternoon, or out grabbing coffees for us. But even when I’ve been by myself, I’m always doing something. Answering emails. Drafting proposals. Shipping giveaways. Cooking. Baking, Photographing.

Working, which feels, because my work is the internet and social media, like a job of shouting. Shouting out emails. Shouting updates. Screaming tweets at the top of my lungs just to be heard above the deafening digital cacophony of a billion other attention-geeking avatars.

Sometimes I feel like I’m shouting just to hear myself above the thoughts that howl through my head faster than the speed of sound.

And this past week, there was a sonic boom.

(Does this whole post not make sense? Is it awkward and choppy? Sorry, it’s just how my brain is outputting right now.)

The move was neither far nor bumpy, just a few miles east. But no matter how easy and/or smooth, moving is always a production with lots of moving parts (a pun! yes, so totally intended). I had to be in three places at the same time, all the time. There were always people. They were always talking. All at once. Landlords. Agents. Property manager. Packer. Movers. Neighbors. Friends. (Did you call the) Cable internetgaswaterpowertelephone Guy?

This afternoon, I opened the refrigerator in our new house and stood there with the door open for what felt like a punishably long time. My guess is that it was less than a minute, but even a mere 30 seconds feels like 20 minutes to a girl who’s been brainwashed about energy costs of an open refrigerator door. (I know I’m not the only one who knows about ping pong balls and beach balls, right?)

The refrigerator is still mostly empty save for a couple bottles of wine, a Brita water pitcher, and the few condiments that survived the purging at the old house because they were unopened, expensive, or difficult to find.

The bottle with only a quarter inch of sriracha left in the bottom somehow made it though.

As I stood there I thought, “This is so nice.”

Who knows exactly what “this” was referring to, but I’m betting that it was a little more than just the refrigerator. Variable humidity drawers were without wilted, withered bits of random vegetables and bare shelves were free of the usual dried, cracked drips and splats of this and that. The entire space had not yet been cluttered with bottles, cartons, jars, semi-disposable plastic containers. Without these things that are usually the noise of my daily delicious life, the empty space was the refrigeratorial representation of "quiet and alone."

“This," I repeated with meaningful emphasis, "is so nice.”

And then I noticed how quiet the new house is. And the new street is. Or rather, I didn't notice helicopters, sirens, construction, fighting neighbors, barking dogs, voices, all through the glass and plastic walls of our old house that were so ultra modernly sensitive that they squeaked and sighed when the air temperature changed at sunset. We didn't live in the ghetto before. We just happened to live on a four-lane mainline avenue between the fire station and a hospital with a rescue helicopter visible from the street.

To give myself a pedicure. To buy a few essential groceries.

And maybe to start living The Delicious Life again. 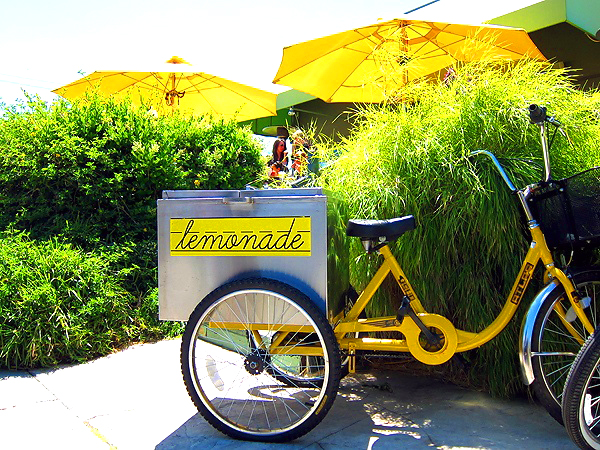 The first time I tried Lemonade, it was back when their brand of point-and-order-fresh-daily-salads was still relatively new. Though the timing made Lemonade blog-able, I only tasted a few bites of whatever was being offered during a food fest (saying that as if I don't remember. whatever. photos?), so I didn't have an opinion of any substance. I went back again once after that, but something about those first two experiences was unsettling enough that I never went back. 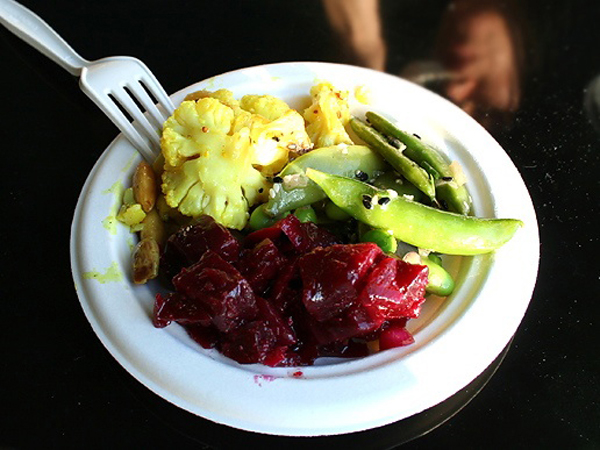 And years later I realize that it is Lemonade's cafeteria-style format that throws me off. The line, if not out the door, is at least to the door, the door creating an awkward limbo where I can't figure out if I should get in line inside the door, placing myself uncomfortably close to the second-to-last person in line, or stand outside the door with the risk of someone else thinking I'm just standing outside the door for no reason so he "gets in line" inside the door, effectively cutting in front of me. 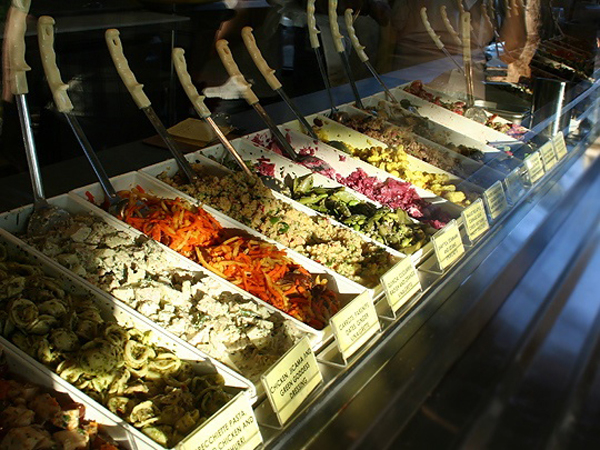 There is, of course, the limbo of line limbo, in the doorway itself, which leaves you holding the door open not only for yourself because you're standing in the doorway, but for every person who walks in or out, even for the people who are 30 yards down the sidewalk but you have to hold the door for them because you made eye contact with them, and since you're holding the door, you lose your place in the line that just moved up by three people.

The line is full of frequent diners who already know the drill (not me), are anxious to get through the line, and are, more than likely, annoyed by the indecisive girl paralyzed in front of a glass case full of too many options. I'm always flustered and feel rushed and thinking about hungry people behind me getting hangrier by the second makes it worse.

I have guilt about holding up the line by asking questions about the ingredients (food allergies) or asking for a taste. I have commitment issues because I don't know what else is further up in the display case. The Curried Cauliflower always looks good and so does the Lentils that are right here in front of me, but what if there is something better at the end of the case that I can't see because there are nine thousand people in line in front of me?! 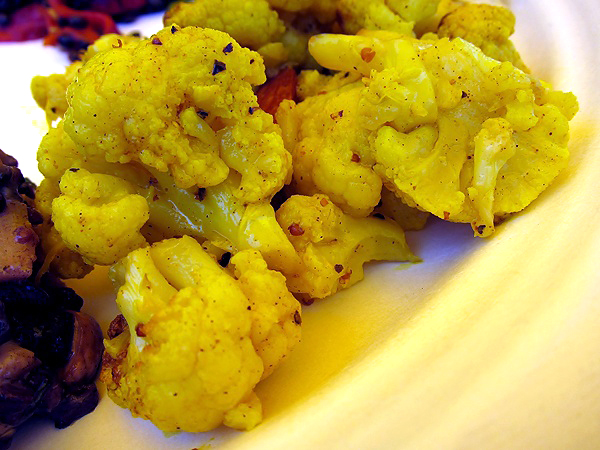 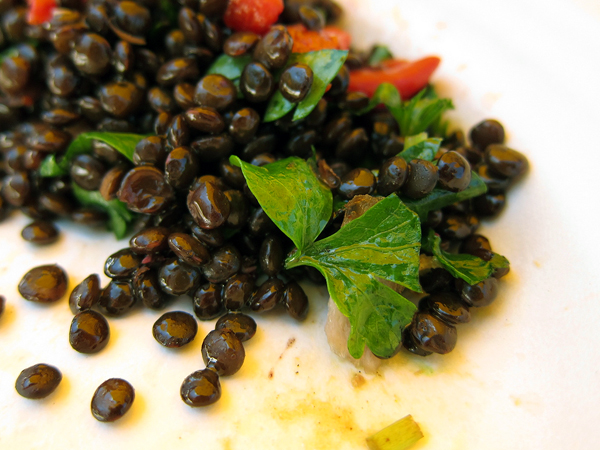 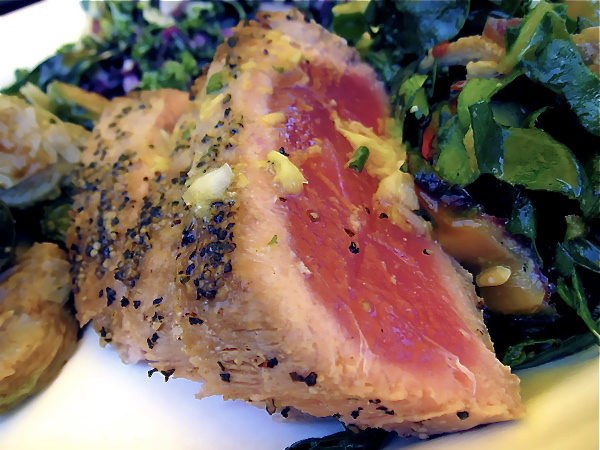 All of this, of course, makes Lemonade sound like a loud, noisy crowded dining experience. It is. For everyone who comes to Lemonade with their cubicle mates for an office lunch or with girlfriends for a light bite between shop stops, it is. They have to stand on the side of the dining patio balancing a cafeteria tray of food and a flimsy plastic cup full of lemonade and acting like they're not hovering over a table of women who look like they're about to leave, but linger, which means you, oops I mean "they," made the wrong choice and are left standing in patio purgatory while the three people who were after them in line are already sitting down and eating. 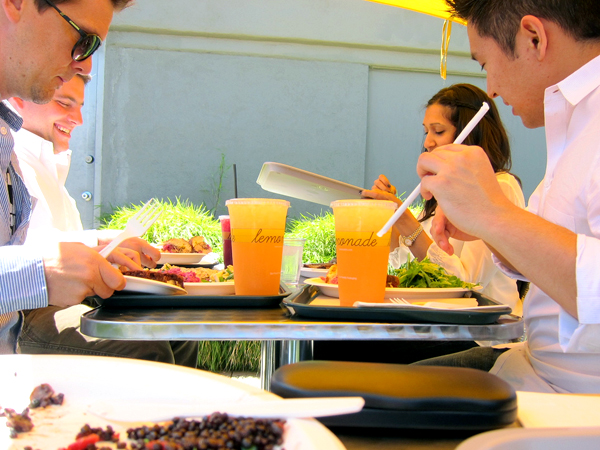 But for me, once I get through the line, past the confusion of "Are you handing me my order? Or are you walking it to the register? Isn't this a cafeteria? You served my salads and are walking all the way to the register on the other side of the room to ring me up?!" and beyond signing my credit card receipt, I walk through that doorway, weave my way through the patio tables and clusters of people, and hop back into the car.

And Lemonade is a quiet lunch alone at home.

I ate Lemonade for lunch a few times in the last month. It is walking distance from my old house.

I probably won't go back there for a really long time. 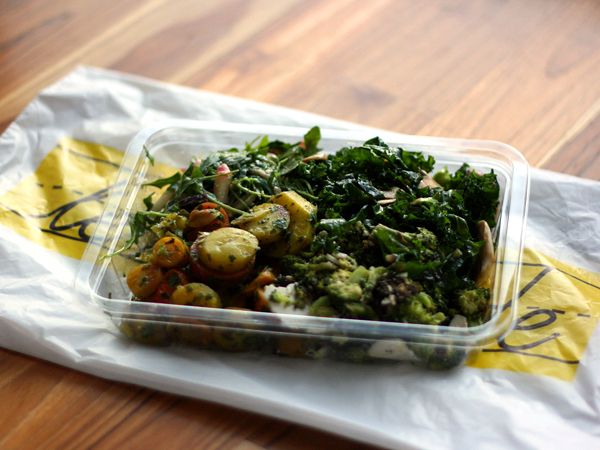