The moment I vowed to never eat roast beef and Rice Krispies treats ever again was more than 25 years ago. However, I remember the events up to, during, and after said moment as clearly as if it had happened this morning.

I was a sick, pouty little princess with the flu, so Mom made my favorites to make me feel better. We had roast beef for dinner, and afterward, not only did she make Rice Krispies treats, but she just happened to smile and turn her head away a few times to let me sneak one, two, three more than the one deliciously marshmallowy-crisp square we were usually allowed. Roast beef and Rice Krispies treats were two of my all-time favorites.

My little flu got worse that night. I couldn’t sleep, even with the two spoonfuls of cherry flavored children’s Tylenol cough syrup I had taken just before bed. Wrapped up in my Binkie (that was my blanket’s name), I tip-toed downstairs to lie down on the kitchen floor in front of the refrigerator.

See? Even back then, the kitchen was my sanctuary. I bowed down before The Refrigerator for mercy. Actually, I felt cold, and for some strange reason, I knew that warm air blows out from underneath the fridge. I lay there curled up in Binkie for about five minutes trying to fall asleep, then sat straight upright, just before violently throwing up all over the kitchen floor, all over myself, and all over my Binkie.

It was partially digested roast beef mixed with soggy Rice Krispies, the entire swirly mess dyed a light cherry red. It was horrifying. Right then and there, right there on my knees in a pool of my very own puke, I made a first-grader's promise to my beloved Binkie that was now stained blood red with cherry-flavored cough syrup. I looked up toward the refrigerator with tears streaming down my face and vowed I would never, ever, ever eat that evil roast beef and Rice Krispies ever again. No, never again, as God is my witness, would I let myself come anywhere near those stuffs that had defiled my darling Binkie.

I want to say that I also had my tiny defiant fist raised up in the air for dramatic effect, but that’s taking it a little too far. Besides, it's just not true.

To this day, I cannot eat roast beef. I can eat steak. I can eat ribs (galbee, duh). I can even eat prime rib (which is technically roasted beef, but don’t tell Binkie). I could probably eat a whole side of steer, but if they are paper- to cardstock-thin slices of beef cut across the grain, I can’t do it. I just can’t eat roast beef. (Arby’s doesn’t count, because, well, that’s like saying KFC is chicken.)

I’ve had Rice Krispies treats since that long-ago close encounter of the worst kind, and I will admit that they still taste good. However, if I am somehow forced eat one, I can’t help but feel like I am going back on my sworn promise to my Binkie. I still have my Binkie. It’s amazing what laundry detergent and a little color-safe bleach Cheer can do.

And to this day, I have a hard time eating Vietnamese food. My mild aversion to Vietnamese food has absolutely nothing to do with roast beef, Rice Krispies treats and Children’s Tylenol, though I’m sure I could build a fairly solid psychological case around the thinly sliced beef in many of the Vietnamese noodle soups reminding me of roast beef. No, the whole point of roast beef and Rice Krispies is that I have very strong attachments to bad memories. One bad experience will put me right back down on my knees in a puddle of puke on my kitchen floor, vowing to never ever eat it again. And I have only recently applied this to a previously inexplicable distaste for Vietnamese food.

I never really understood why I didn’t love Vietnamese food the way others crave banh mi, bun, and phô. I’ve always just said that I don’t like the flavor combination of cilantro, limes, and strongly fermented fish-based condiments, which explains why I also don't love Thai, but was wholly inconsistent with my love of Mexican food and extremely strong, oily, fishy fish like anchovies and sardines.

I just shrugged and dismissed it as one of those “That’s just the way my tastebuds are wired” things. Without going into as much gory detail as I did with my childhood Sarah-turned-Scarlett-at-Tara trauma, I’ll just say that I was turned off to Vietnamese food after a very melodramatic, emotionally challenging experience that involved a guy, another girl, and phô. Phô was my roast beef and my pathetic little broken heart was Binkie. I think I swore off the entire cuisine from Vietnam just to be on the safe side.

Thai is growing on me, but strangely, Vietnamese is growing on me faster. With Thai food, there are legitimate flavor distastes like lemongrass and coconut. But with Vietnamese, let’s just say that Binkie has gone through enough therapuetic wash-dry cycles to be wholly okay with Rice Krispies treats, though roast beef will have to come later. 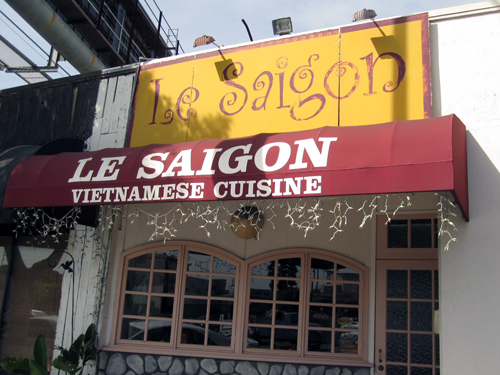 We went to Le Saigon, a small Vietnamese restaurant on the westside. It’s on a block of Santa Monica Boulevard that has quite a few neighborhood ethnic restaurants – a couple of Japanese, Mexican, a café, and Le Saigon. We parked, and walked past the full tables on the sidewalk in front of each restaurant. This is a busy block.

Other than the ceilings fans that have woven bamboo-y looking straw paddles, there is nothing remarkable about the interior of the restaurant. It’s fairly crowded for a weekday evening, but we sat down right away at the only open table, tucked away in the far front corner. The clientele is an even mix of Asian and non-Asian, and age-wise, it is young. It looks like a heavy emphasis toward UCLA students on study break, with quite a few of them watching coffee drip through a small silver contraption clamped to the top of a cup. 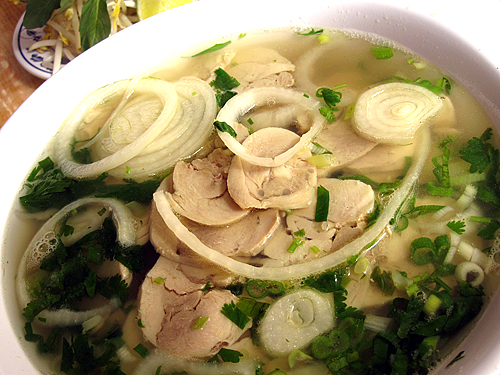 The menu is standard Vietnamese soups, noodles, rice dishes, and appetizers. On my first visit back in 2005, I wasn’t quite ready to fully face phô even though brothy soup type things are my favorite. Instead, we went with bun bo tom nuong, a combination of rice noodles with grilled shrimp and beef. We also wanted to try something brand new. The menu said it was a “Vietnamese meatball” and the server said it was wrapped in rice paper, which sounded like a meatball-filled springroll. We ordered it.

The bun was fine. As cheap as it is, it’s fairly hearty with paper-thin slices of beef that have been chargrilled, almost like bulgogi with no seasoning (but not like roast beef). The shrimp were just a tad rubbery and dry, but with all the additions of sriracha, sambal, fish sauce, and hoisin, it was very easy to remedy.

The springroll surprised me. Vietnamese has a strange translation for “meatball.” It was not rice paper wrapped around many small, round balls of meat lined up like tennis balls in a can like I expected; rather it was a sausage that had been sliced longitudinally and wrapped up with vegetables in rice paper. Don’t get me wrong, I wasn’t disappointed with not getting meatballs, I just wasn’t expecting it. I mean, look at the size of that sausage! It was very flavorful and almost sweet, different from any sausage I had ever tasted before, though somewhat greasier than I like. I’d definitely get it again, but not before trying all the other delicious Vietnamese things I’ve been missing out on. 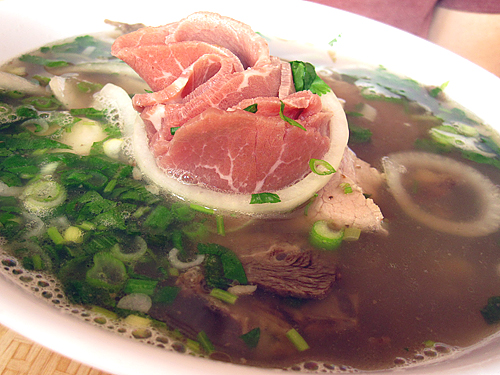 While Vietnamese cuisine as a whole is still very slowly growing on me, I have since developed a fast, shameless crush on pho, in a strange, but comfortable relationship of convenience with Pho 99 in Brentwood. I realize that I should probably get my food blogger cred(it) card snatched away from me for resorting to such gross, inauthentic ethnic hard coreness, but eh. I'm too old to trek too far for a food that I eat when I am sick and/or hungover. A recent visit to the further-out-but-still-Westside Le Saigon was motivated by the evil combination of illness and oddly enough, boredom. We sat down for a quick bowl of pho to open up my airways in a setting that might stimulate just by virtue of being different. Le Saigon is not really all that different from Pho 99.

I can't make any sort of statement about how my Chicken Pho tasted because I could not actually smell-taste the broth. Only primitive tastes of salty and spicy came through, and since that was all I was getting, I even indulged in the lime wedge for the sour. I was slightly put off by the amount of chopped cilantro floating like dead, dank weeds in the broth, but that is my fault for forgetting to request my bowl without it and really, it could have been parsley and my nose would not have known. My bowl of chicken pho did, however, do the job for which we came: the steam floating up through my sinuses gave me the false - and temporary - sensation of relieving the pressure. His Beef Pho seemed good enough, though I didn't try it.

Raw beef does not scare me, but swine flu does.

They say you can't really live in the present if you cling to your past. You have to let bygones be bygones. Perhaps I have done that. Perhaps I have finally buried the past. Perhaps enough time has passed the I can now appreciate the food that tore open my college sophomore chest, ripped my precious innocent heart from its place, tore every fiber from fiber and left it a bloody, pulpy, mass of cardiovascular muscle atop a bed of rice noodles in an anise-scented beef broth!

But I still can't ever eat roast beef.