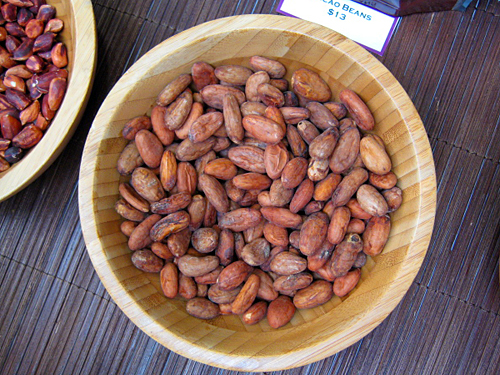 I have a little bit of guilt about this post and the Los Angeles International Luxury Chocolate Salon and about gourmet artisan fancy oohlala chocolate in general.

Ok, not really, but I should have guilt.

You're probably wondering why I would have guilt about something about which you haven't heard much, at least recently. Yes. Exactly. You haven't heard anything because the International Luxury Chocolate Salon is an event that took place in October 2008, which, by my impressive math skills, is a little more than six months ago, which sounds better than saying the event was "last year," but in either case, means this post is shamefully late as a post-event review or embarrassingly early as a bit of PR for this year's event, to which I will most certainly not be re-invited as a Tasting Panel Judge, either for obvious poor postevent bloggeration or for overzealous overusage of commas in run-on sentences.

So, I should feel guilty. My parents paid a lot of money for me to learn English in private school.

And I should feel guilty that it has, indeed, taken me upwards of six months to put up a review that is merely a small collection of random, related though non-linear, non-logical thoughts from the event and a photo gallery.

But if we assume a picture is worth a thousand words, than this post with 18 images is pretty comprehensive.

If Not for College Football and Chocolate...

The event organizers must have had some kind of special herbs in their chocolate (wouldn't be surprising, based on some of the chocolates and companies at the event, but more on that later) because as unbelievable as it sounds, they asked me to participate on the Tasting Panel for the Salon. It was utterly flattering to be considered someone with discriminating enough taste to judge, but I have to admit that had it not been for the invitation, the event would not have hit my radar, let alone my actual calendar.

The event was in Pasadena.

I only go to Pasadena for the Rose Bowl. And that's only when my alma maters play each other.

An Event with Logistics Only a Mother Could Love

Now, even if drive-time isn't part of your decision-tree like it is for me, even if "eastside" is your 'hood, even if you happen to live in Pasadena on the same block as the Pasadena Center so that you don't even have to drive and park, even if you happen to be IN the Pasadena Center at the exact right time for some other event — even if — you still have to really really really love chocolate to go to the event. There was  a lot to endure.

I'm a bit of a mapgeek, but I had difficulty finding first, the venue, and second, the actual location of the event. I got lucky taking my chances on following a small group of women who looked like they might like chocolate. There were no clear signs to go around the side of the main building to the back. Even the venue's ticket booth was void of any real signs that confirmed I was in the right place. I wasn't even sure, as part of the Tasting Panel, where I was supposed to go. I had received no instructions about what to do once I got to the event. Confused about my role, I almost ended up paying for a ticket.

Neither Luxury Nor Salon

There was neither anything luxurious nor salon-esque about the Luxury Chocolate Salon. With skirted folding tables around the perimeter of what is essentially the lobby of a convention center, the event had the feel of a small-time tradeshow. Participating on the Tasting Panel, I had brought more than what I normally carry in a handbag, and yet there was no place to set down my things, let alone store them during the event. A "salon," to me implies "lounge" of some sort, but the only place "to lounge" was on a set of chairs in an area set up for demonstrations. Those chairs were all taken, all the time. I was uncomfortable the entire time I was there, holding my bags and standing in a seemingly un-air conditioned room that was way too warm for a chocolate event.

No Rest for the Weary, No Chocolate for the Attendees

But perhaps the most unfortunate thing about the event was the availability of the chocolate. You have to love chocolate to tolerate some of the logistics of the event, but at the end of the day, your love and tolerance got you almost nothing in return. I'm not exactly sure what event goers were expecting for their ~$20, but I would assume that it was more than just an opportunity to look at chocolate, its packaging, and talk to chocolatiers, but the chocolatiers didn't seem to have enough samples for the attendees. I didn't do enough post-event research to find out what had actually happened (or not happened), but I am guessing that it had never been made clear to the chocolatiers that there would be hordes of chocolate connoisseurs excited about trying products. At many of the tables, I had to tell someone I was on the Tasting Panel to try their chocolate. Having lived in LA for so long, I'm already sensitive to people feeling "vip" to do, see or attend things, so I felt like a heel doing that.

A Few Highlights. Literally, a Few

With close to 30 chocolatiers, and the aforementioned setup that made it virtually impossible to take good photographs, let alone detailed notes, I could only pay attention to a handful of the chocolatiers. Here are the more memorable notes:

The event is relatively new and based out of San Francisco, so most of the kinks are forgiveable - not knowing what Los Angeles weather is like in October (80+ degree days are not uncommon) and being unfamiliar with the venue. Hopefully for 2009, TasteTV will do better communicating expectations to everyone — from the participating chocolatiers to the Tasting Panelists to the attendees.