lucky me - hollywood two nights in a row! saturday at geisha house was the official celebration for figi’s birthday.

at the same time, geisha house is both hard to find and hard to miss. with so many bright blinking lights along hollywood boulevard, another set of blinking lights does’t stand out much. but, geisha house has no sign, and instead, identifies itself with a pink neon wall. the $8 valet and the entrance, too, are on the side street, cherokee, so without knowing in advance what to look for, we drove by it. twice.

you’d never guess how enormous the space is from the oustside. the entire place is like a chaotic little piece of tokyo under one roof. the cherokee entrance leads down a narrow hallway with a low ceiling that opens up into a long alley of a bar that connects the dining rooms. on one end there is a small dining room with a few tables and booths, as well as the sushi bar. the other end of the bar spills out into the main dining room.

we waited for the rest of the party in the low lounge seating, which is backed up against a photo montage mural of geishas painting their faces. the specialty cocktails are themed around geisha-dom, but look too sweet. i’ll wait for sake with dinner, though maybe a little warm alcohol would have been good because the a/c had been pumped up way too high - brr. the back wall of the actual bar, which we are facing, climbs past the ceiling to the second floor. the dolce restaurant group must have a thing for visually stimulating bars, with fire behind the bar at dolce enoteca, and here at geisha house, tiny tv screens flashing japan-related movies. first lost in tranlation and later, some sort of japanese porn.

we have to pass through the main dining room to go upstairs; our table is on the circular balcony. an impressive red tower shoots up the center, with fireplaces at both the the bottom and top. it’s not meant for warmth, just for ambience and some more visual stimulation. more evidence of the dolce group’s pyromania.

most of my interaction with the staff is smile-and-nod on the outside, but gag-roll-eyes- oh-really?-hmm on the inside. our server is dressed in what is supposedly traditional japanese fisherman’s garb, but looks like a striped benetton shirt from 1985. he lets us know that they have a sommelier, and gently translates for us...it “means wine connoisseur.” oh really? we would never have known such a fancy word! our sommelier is a petite guido in a pin striped suit and slicked back hair. partly because the restaurant is extremely loud, and partly because of his thick italian accent, i can’t understand his explanations of how geisha house’s sake selection is the most extensive in the area. again, oh really? guido whips out a tiny photon light to point out this and that on the sake list to the birthday boy, then returns with the wakatake sake. for all that sticking with tradition and knowledge of japanese sake, he pours the ladies first. hmmm.

the sake was crisp and, to my liking, rather sweet. the first kanpai! and we were on were way.

geisha house’s menu, like its environment and decor, has a little bit of everything: hot and cold small plates, sushi, sashimi, robata-yaki, salads, oden, soup, rice, and tempura. i wanted to start with oysters. when i asked the waiter what kind they were, he said they were “from maine.” what kind, though? when he gave me a blank look, i just told him to bring me a half dozen.

there’s not much to say about the sushi, other than that it was far too expensive for it being just *eh*. i am not fond of sake (salmon) sushi, so i took words for it from my left and right that it was good enough to make two more orders. the rest was maki sushi, from a list that had some ridiculous names.

i didn’t get to taste the cowboy roll, made with beef filet, asparagus, red pepper and scallions. the heaven roll, with chopped toro, special tuna, and spicy tuna, was wrapped in soy paper and just too squishy, even with julienned cucumber. 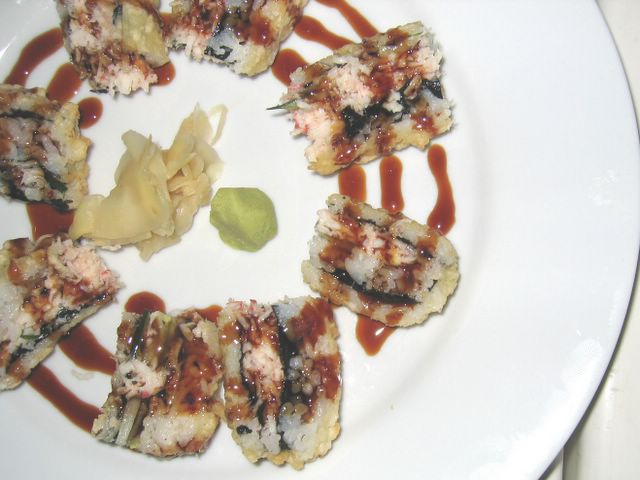 only holly would: hollywood roll

of course we had to order the hollywood roll. crab tempura, avocado, and cucumber, were presented dramatically with drizzles of unagi kabayashi sauce. the last roll, which the waiter recommended, over the rainbow, was only okay. none of the sushi was outstanding.

the robata-yaki and hot items were better. three skewers of yakitori were supposedly sauced with teriyaki glaze, but one of them mysteriously had little green spots – wasabi? rather thin slices of beef filet alternate with asparagus on the beef skewers.

the bacon-wrapped cherry tomatoes were my favorite of the evening (except for the oysters “from maine”). all the robata-yaki dishes come with dipping sauces. i can’t accurately identify them, except for the spicy sauce – which seems to have been just a squirt out of the sriracha bottle.

from the fryer, there was chicken karaage and rock shrimp tempura. both were presented on little red napkins that made it look like it had come straight from the colonel’s bucket. the shrimp, which looked like popcorn, was popular at the table. the chicken karaage wasn’t what i am used to. although the chicken was cut large and fairly tender, the meat was bland, and it didn’t seem to have been dipped in any sort of batter before being fried. it was also glazed with a sauce that was almost too sweet. i’m more accustomed to salty chicken, an obvious fry batter, and no glaze, just sauce for dipping.

for dessert, the birthday boy got a molten chocolate cake, properly presented in a square lacqered bento box, with a candle in the vanilla ice cream. it’s chocolate and ice cream, so i didn’t complain. ice cream nuggets were a fancy version of japanese tempura ice cream that i’ve had in local sushi bars. ok, so maybe the apple crisp would have been better ;)

our group had fun as we always do. the geisha house is aesthetically impressive, but the food was only so-so for how much it cost. awwww, and we didn't even catch a glimpse of mr. kutcher, or any other celeb for that matter. i can say now i’ve been to geisha house, and i think that’s enough.