I don't pay attention to cars.

I'm not blind to cars in a way that would make me a hazard on the road. I will have you know that I am a hazard on the road for other reasons, one of which may or may not be my being a middle-aged Asian female. It's just that on the grand spectrum of "Personally Cares About Cars" where one extreme is the girl who won't date a man whose car costs less than her pristine Bentley GT and the other extreme is...well, hrm. I am the other extreme.

I've been driving the same car ever since I got my driver's license, which was don't-ask-won't-tell-how-many years ago. Let's just overestimate it this way: when I was learning how to drive, the first car to which I put my foot to pedal was an Oldsmobile, which tells you a lot because they don't even make that car anymore and for God's sake it has the word "old" right in the name.

Do I have to keep writing this post? I am three-quarters of the way to a cougar complex.

Now it's not the exact same car, but I have been driving the exact same make and model because someone in my family in a previous lifetime must have beaten up a horse and now I have to pay for it with my overly reliable transportation. Little does Miss Karma Sunshine know that I don't pay attention to cars so this little punishment was a waste of energy!

The point is, I only ever notice a car when it's trying really hard to standout with either its brand or its bravado. Because of the neighborhood in which I've chosen to live, I couldn't ignore a flashy flamin' hot Ferrari if I tried. Otherwise, every car blends in with the rest.

Except the car that my Ex drove.

Which is a not a common "car." Which is a commoner's car. Which is not a car I would ever in a million years have ever even noticed before, at least not more than say a Ford Taurus, but which I now seem to notice at least three times on any driving excursion anywhere in this city as if Costco had a green light special on them for 12 months.

But is that so unusual? Isn't this some sort of well-known social behavior? A natural reaction in the psychology of our brains? At the very least, there has to be an ancient Chinese proverb that says something along the lines of: "she who dates a jerk will never escape his jerky car?!" (Don't pretend that you 1) didn't get that in your last fortune cookie from Chin Chin and 2) add "in bed" at the end.)

The phenomenon is not just limited to ex-boyfriends. 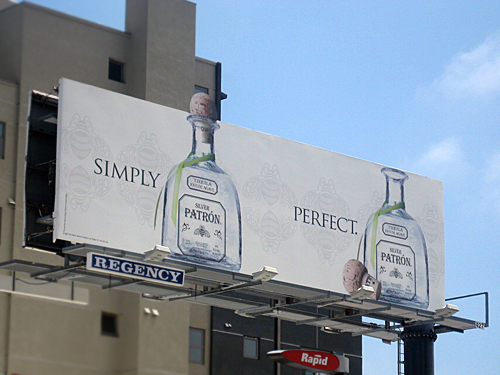 But I wasn't just seeing Patron. 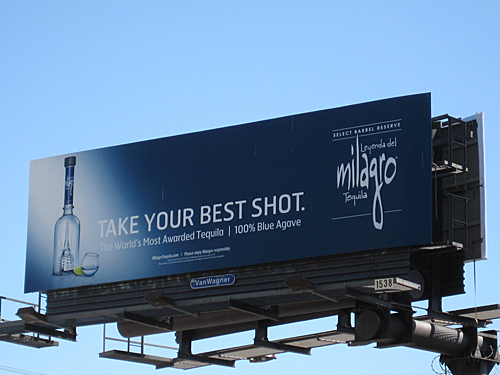 It started with Milagro, which I noticed because I had never heard of Milagro before I was gifted with the bottle that is now sitting in my liquor cabinet, untouched. (It is unopen not because I am unappreciative, but because I am enjoying the beauty of the virgin bottle over whatever "beauty" I may experience if I were to actually drink tequila.)

However, within a two-mile radius of my house, I saw other brands of one tequila, two tequila, three tequila, more, splashed across billboards and...bus stops. Because people who ride the bus are exactly the market that buys premium tequila...? And these were just billboards that I caught on digital film because I happened to have my camera out and on in the car. Don't ask me why I would have the camera on. A good food photographer is always ready to snap a photo of a wayward hot dog or something wandering the streets of West LA. 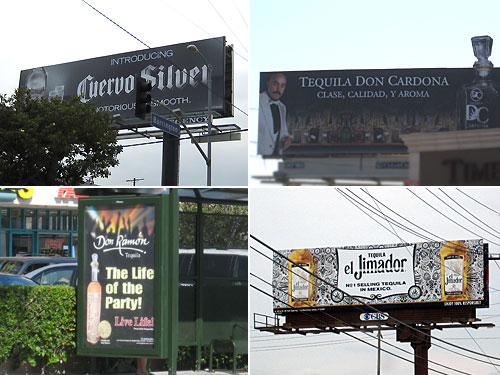 The oddly coincidental launch of all these tequila billboards may have been no coincidence at all. It could have been the result of some secret tequila monopoly marketing mafia thing this past summer. I don't know. And now I will probably have that tequila mafia after me because I just mentioned them on my blog.

It may also be that tequila is an alcohol that is, indeed, coming into trendy favor, kind of the way other alcohols and cocktails have had their 15 minutes in the past. Martini. Pina Colada. Cosmo. Mojito (gag). Now it's tequila turn. Of course, tequila is the alcohol, not the cocktail, but maybe that is a point. Tequila doesn't really make good cocktails other than a margarita.

"That's the drink the Ex served at the first party where I met his friends..."

How to Make a Mexican Martini

Though we didn't do this for ours (mostly because we forgot), throw in a splash of olive juice. It probably has the same effect as a salt rim.