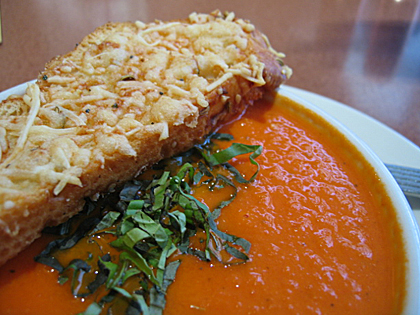 With the exception of a few choice stalls in the Farmers’ Market near The Grove and a long walk across Wilshire, south on Beverly Drive, there are few places that offer fabulous shopping and food together in the same place. In fact, the Farmers’ Market at 3rd and Fairfax doesn’t really count because The Grove doesn’t have good stores. And we won’t even talk about mall food courts, unless of course, it’s Hot Dog on a Stick, but really now, that’s only when you’re shopping for shoes because there is no way your body will fit into that size 0 Norma Kamali dress after two corndogs and freshly pogo’d cherry lemonade.

The Creamy Tomato Basil Soup I ordered was based on the recommendation of the person who was with me. With the beginnings of a sniffle, I had been leaning toward Chicken Noodle Soup, but he *gasp!*ed and said I simply must get the Tomato Basil. He is *ahem* a regular at Nordstrom and knows. Don’t ask, and no, he is not a gay man. He is just a fabulously well-dressed guy who apparently takes his soups very seriously.

For as pedestrian as a cafeteria-style service felt, the presentation of our food was pretty fantastic. The soup was presented in a deep, heavy bowl, garnished with chiffonade of basil (that’s “skinny strips” if you’re in my house), and served with a cheese crisp balanced along the edge. The soup’s bright orange color and lumpy bumpy textured took me a little by surprise. Tomato soup had never played a huge part in my life, if at all, and I had expected something akin to the chemical red of Campbell’s Condensed Tomato Soup. There wasn’t much basil fragrance or taste in the soup, so I suspect that the “basil” part of the “Creamy Tomato Basil” was that garnish. No matter, since basil doesn’t get my tastebuds hot and bothered the way it does for some people.

What did send me into a low altitude orbit, though, was the accompanying cheese crisp. I have a weakness for them the way Nicole has a weakness for manorexic DJs. I love how crispy, crunchy, almost hard the thinly sliced bread is. I love hoe they are covered over with hardened, dried salty cheese, and as long as the crisp is not moldy or soggy, I pretty much don’t care from where it is. In fact, I highly doubt the Nordstrom Café actually baked the cheese crisps themselves because they’re just too easy to buy. I should know. I buy a bag of Just Crisps for $4.29 at Ralphs and eat them right out of the bag like they were Lay’s. I usually finish them in the car before I even get home. I can’t stand “croutons” in my salad, but I can eat them, and crisps, right out of the bag. 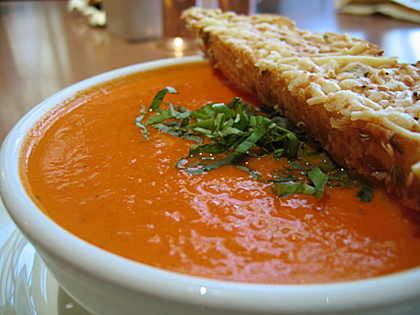 campbell's would be green with envy 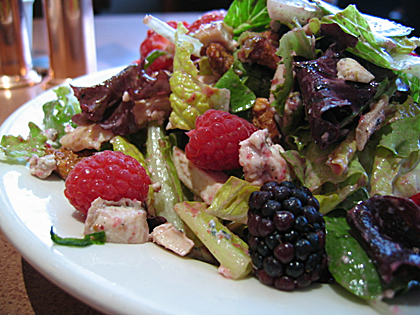 Had the salad been as wildly fabulous as he made it seem, I probably would have finished all of it depsite my immediate future in the dressing rooms, but it was only good enough that I ate half, and left the rest. Judging by his attempts to hide a crestfallen face, he was slightly disappointed, though that might also have been from the realization that he ate his entire salad. You know how we are. We always feel more victorious when we eat less then everyone else around us. I was, however, nicely surprised how nice berries worked in a salad. In fact, that salad was my inspiration for a Fresh Fig and Blackberry Salad with Blue Cheese and Walnuts earlier this summer. 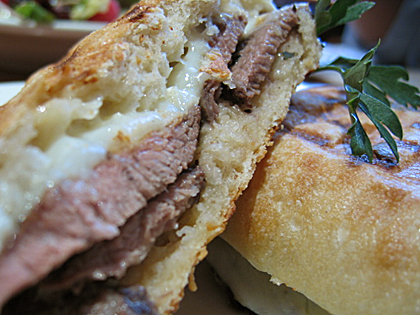 steak panini had to be good

Another dining/shopping companion ordered a Steak Panini, which I didn’t try, but know was good. He is infinitely pickier than I (wait, I'm not picky), and if he ate it, it must have been good.

** a year ago today, tony bourdain kept feeding my addictions **