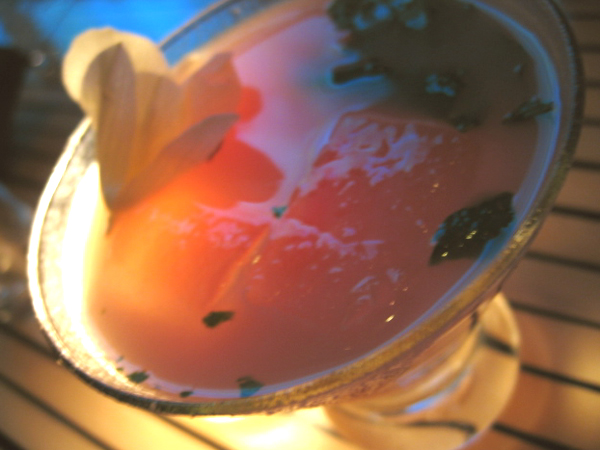 la.eater.com reports that Blowfish Sushi (to Die For) is, um, dead as of Summer 2008. Unsurprisingly, no reports of anyone looking to take over the restaurant space.

It’s kind of cute actually, this little fugu. A tiny, embryonic-looking fish with huge eyes and an enormous forehead, barely a tail, and miniscule gimpy-finding-nemo fins, it looks quite innocuous. But oh, mortality! for the predator who pisses little fugu off. The fugu explodes into an enormous ball, armored with deadly spikes, and looks like those military mines planted at the bottom of the sea. The amount of fugu poison that can fit onto a pinhead is enough to kill a man, and all the poison in a single blowfish could kill 30 men. Scary. Well, even in its military form, it’s still kind of cute. In a fish tank.

So leave it to those crazy Japanese (and I say that with the utmost respect,) to make fugu a highly-prized delicacy. In Japan, they serve complete fugu dinners, with fugu as the star ingredient of each course from fugu sashimi to a type of fugu shabu shabu. Many a person has passed on to his foodie afterlife from eating fugu, and still people eat it. I guess that is the macho rush – the possibility of dying in the name of...food? Fugu is not served anywhere I know of here in LA, and have only seen on tv one place in New York that flies frozen fugu in from Japan. It can only be prepared by a licensed chef, and my understanding is that these guys are only in Japan. The closest thing I’ll ever get to eating fugu is eating at Blowfish Sushi, the restaurant, and the only poison I’m putting in my body is cold, clear, and has a light cherry finish (sake).

I love Blowfish Sushi to Die For (that’s the full formal name of the restaurant). I had heard of Blowfish Sushi when I was still very closely following the Bay area dining scene, even after moving to LA (I hated the restaurants in LA when I first moved here). It was an interesting concept, and I was intrigued by their connection with a pair of local San Francisco DJs. Then I heard that Blowfish was going to open in the spot that used to be Goodbar on Sunset in West Hollywood. I couldn’t wait for it to open. When it finally did, I went right away. I loved it, and have gone back several times.

It’s not about the sushi for me at Blowfish. For a while, I wasn’t even able to eat sushi at all (a strange personal aversion to it that has to do with a childhood history – ask me later *wink*), and though I can’t get enough of sushi now, I am not a fan of the contemporary sushi that overruns LA – creative rolls that have very un-sushi like ingredients. Like cream cheese. But I won’t even get started on that. I prefer the plain, traditional simple nigiri sushi.

No, Blowfish for me is about the creativity in everything else but the sushi. The interior, the bar, the vibe, the music, the menu. It’s somewhat hard to find, as I don’t actually recall ever seeing a sign that says “Blowfish” in the front – only a small, dark bronze, screaming anime blowfish by the front door. You’ll know you’re there when you see a line of Escalades and Benzes waiting for the valet, and gorgeous Hollywood trendsters smoking out front. Though I am normally put off by pseudo-trendsters, it really isn’t that annoying, once inside.

It’s dark. And very sexy, starting with two rail-thin, dressed-in-black hostesses examining “the book” up front. Being so pretty, they could get away with being cold and bitchy, but wow, they’re actually nice (unlike one of the bartenders who is too good to be a bartender, apparently) There’s a large three-sided bar in the middle, with one dining room and the sushi bar off to the right, the lounge area to the left, and off to the back, another room, convertible to whatever it needs to be. Dining room. Lounge. Dancefloor. Yes, it could be a dancefloor because the DJ spins back here.

Though it’s a full bar (good for my citron/soda), the specialty at Blowfish is sake. There are about a dozen premium sakes with English names. I don’t know if these are the literal translations of the Japanese names, or just fun, creative identifiers, like the names of some of the sushi rolls. They have helpful descriptions, but as always, I can’t distinguish between sake subtleties. I just like it cold and dry.

Blowfish’s specialty cocktails are all based on sake or soju. I try to stay away from soju, but I do understand that the Japanese version, shochu, is a much cleaner version of the Korean soju that I drank way too much of in college. Specialty cocktails are a love-hate thing with me. I love sweets, so I want to order them, but if I do, they end up being way too sticky sweet and I hate the horrible hangover that comes from sugar mixed with alcohol. I haven’t ordered a specialty cocktail yet, but I’ve tasted and almost finished someone else’s. Doesn’t it always taste better when it’s someone else’s? The Peach Nympho and the Sweet Leilani are both made with peach juice and nigori sake, an unfiltered sake that is cloudy and usually sweeter than the clear sakes. Both are a bit too girly and sweet for me. The Cucumber Cooler is more my style, cucumber, lime, sake and soda water. As a side note, Blowfish’s water is steeped with cucumber slices, so it doesn’t have that LA tap aftertaste.

The sushi at Blowfish is fairly standard. They have nigiri sushi, but nothing unusual or extraordinary except an o-toro (fatty tuna). Blowfish also has more contemporary maki sushi that were the invention of some very sushi-fashion-forward chefs at some point in history, but have now become standard on all Japanese sushi menus: California, Spider, Rainbow, Caterpillar. I’ve always wondered who invented these rolls – most probably a Japanese ex-pat hidden somewhere in LA.

Blowfish also has their own brand of maki sushi. Tuna, avocado, and tobiko wrapped in nori then fried is the Ritsu Roll, named after executive chef and restaurant owner Ritsuo Tsuchida. Deep-fried, especially with avocado – could that ever be bad? The Animal Style Roll<
/strong>, very trendy now soy paper filled with spicy tuna, crab, red onions, and shrimp tempura, is inspired by the secret menu at In n Out Burger, in which ordering “animal style” means the burger is cooked with mustard, and has grilled onions instead of fresh. I guess it’s the red onion in the roll that makes it Animal Style. Thank god it’s not a cheeseburger wrapped in seaweed.

Baked Alaskan Salmon Roll is something we order multiple times. And while normally sake, in any form, steak, filet, or sushi, is something I don’t order, I actually eat a few pieces, rather than just try one. It’s similar to what many people may know as a Philadelphia Roll which is just salmon and cream cheese, but this one is the uptown version with baked salmon, avocado, and a deliciously decadent cream sauce.

Though it looks interesting, I’ve never tasted the Godzilla Roll. The ingredients on their own sound great, even in combination, still sounds a little too over the top for me for sushi: amaebi, mango, avocado, caramelized cashews, roasted coconut and aonori. Sounds better as a salad.

But like I said, it’s not so much the sushi, even the more creative maki sushi, that I love. It’s all the hot and cold small plates. Normally I am very much over miso marinated cod, but the Kyo Twist, with only enough sake and miso to still let the cod taste like fish, falls apart beautifully into flakes that are easily manipulated with chopsticks. I pass on Oyster Roulette – the half dozen oysters on the half shell for something more spicy – Fire Oysters. Presented like regular raw oysters on a bed of crystal (that’s what it looks like), they’re filled with pesto, cheese, wasabi, tobiko, mayonnaise (though they call it “aioli”), and my favorite, tabasco, and broiled. I could do without the pesto, but love the melted Jack cheese, and of course, most certainly would not have minded a few more dashes with the tabasco.

Unlike other Japanese restaurants that serve dynamite made mostly of filler mushrooms and only a few rubbery pieces of indistinguishable shellfish, Blowfish bakes scallops, shrimp, and real crab (no “krab” here) in the caps of shiitake mushrooms. They're called Dynamite Caps.

Shamefully, I’ve never tried dessert at Blowfish. By the time the end of the meal rolls around, I’m either too full from food, and more than likely, I’m too happily buzzed on sake to care. One of these days, I’ll oder dessert first.

Blowfish’s concept is similar to Geisha House and a lot of other recently emerging restaurants – contemporary sushi and Japanese small plates in a trendy hip environment. But Blowfish was first, even the tv screens, and I like it much much better.