Home » cooking » Bacon-Wrapped Dates - The Only Hot Date I've Had All Year, Even Though it's Only January 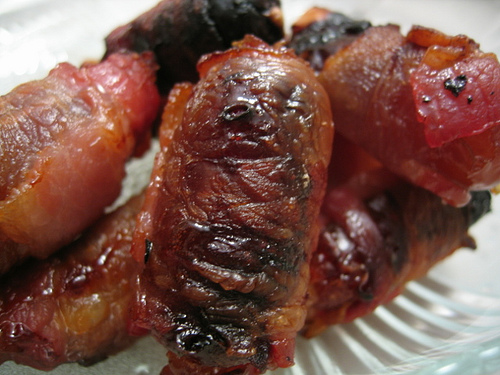 The original draft of this post was a long, thoughtful dissertation on dating, which was the set-up for Brie-stuffed, bacon-wrapped dates that were a starter at a mostly-Spanish not-really-tapas tapas dinner party I had.

Instead, let’s just talk about how original good intentions can take an unexpected turn and unfurl into ick.

I intended to write about dating, and what clicked through my keyboard and onto the screen, while therapeutic, ended up being *ahem* a little too therapeutic for public consumption.

I intended to re-create the roasted dates stuffed with parmesan and wrapped with bacon that I had devoured at an LA restaurant that nearly sent me into cardiac arrest with excitement, and what came out of my oven, while close enough to delicious, ended up looking like *ahem* something not quite suitable for consumption.

(The restaurant at which I ate the original bacon-wrapped dates shall remain nameless for now because likely at least four weeks will transpire before I get to write up my almost-orgasmic experience there, and I just can’t bear to play hard to get with myself for that long. If you must know, let’s just flirt around the restaurant’s identity – the name has three letters which do not spell out a word. Because I’m easy like that, I’ll even tell you that the letters are: C, A, and O, but I’m not going to tell you in what order they’re supposed to be because I’m also an international woman of mystery like that! Yeah, baby, yeah! *raises eyebrows*)

So, these particular dates, the fruit kind, just like dates, the people kind, don’t deserve very much attention. They had so much potential. *sigh* Don’t they all? But in the end, it just didn’t work out the way my heart was hopefully expecting. Of course, it's all my own silly silly fault. With my inability to accept the date exactly as is, I tried to change him to what I thought was more a more “sophisticated” and “gentle” Brie, but is it surprise that I was unsuccessful? Of course not. External factors can be changed, like a light glaze with reduced balsamic vinegar, but internal, personality-defining characteristics should be left alone. The too-soft Brie cheese oozed out of the dates long before the bacon had crisped.

Timing was off as well, which is why they *ahem* burned. I’ve got to learn how to pay more attention instead of getting absorbed in all the other things that are seemingly more important.

Or at least, remember to f--king set a timer.

Ah well, it’s wonderful to be surrounded with friends who will drink with me over a date debacle and insist that it isn’t me, that I’m amazing, and for God’s sake it’s bacon.

Slice a date lengthwise and wrestle out the pit. Stuff a small piece of Parmesan cheese into the date. (Like I said, I used brie, which was a total mistake. Don't get creative with the cheese. Okay, get creative, but stick with a cheese that is hard, or at least semi-hard. This also goes for dates. In every sense.) Wrap a half slice of bacon around the date and place with seam down on baking sheet (greased? ungreased? it's bacon -- what do you think about needing to grease the pan?) You could also "secure" the bacon with a toothpick, but that's too much effort for me. Repeat with all dates.

Bake for 5 minutes, rotate sheet, turn each date over, and bake for another 5 minutes or until hot. Okay, out of context, that just sounds funny. I can't help it. Sometimes I have the mind of a 13 year old.

More Bacon-Wrapped Dates Around the Web:
~ Allrecipes has a version with blue cheese
~ Dave Lieberman stuffs his dates with ricotta; I wish Dave Lieberman would stuff my dates with...oh never mind.
~ Goat cheese and almonds for the Bacon Show that looks like it's based on...
~ a Goat Cheese and Almond Stuffed Dates recipe from Red Cat restaurant in NY, via Saveur.com
~ Almonds for Martha Stewart's bacon wrapped dates, too, but leaves out the cheese completely (huh?)