Home » recipes » Feta Cheese Souffle with Walnuts, Dates and Mixed Greens in Honey Lemon Vinaigrette - Even Though It's "Baking"

I made a Feta Cheese Souffles with Walnuts, Dates, and Mixed Greens in a Honey-Lemon Vinaigrette, even though souffles are considered "baking."

I barely made it out of the kitchen with any dignity at all.

I didn't even have enough ramekins because somewhere along the way, potlucks and such have dispersed them all over LA (filled with things wholly unrelated to souffles, like hummus). Those got a slippery, buttery rub-down and a dusting of ground walnuts. That's a little idea I've shamelessly stolen from Gourmet magazine. In fact, I'm also about to admit that I snuck the tip of freezing the ramekins for a few minutes. I have no idea what that does, but I trust Alton.

Melting butter, adding flour, and making it all gurgly and bubbly - that's easy. Now I had to just trust my instinct. Would warm buttermilk work? I don't know enough about food chemistry to know if the acid in buttermilk or the little golden butter balls would have an adverse effect on the fussy little chemistry that is a souffle. We'd just have to wait and see.

Cheese is not unusual for a souffle, but I've only ever seen Cheddar, blue, and maybe even something as wild as gruyere. I added feta and just prayed that it would melt in. It did, sort of - a little grainy, but it's feta. That alone makes up for the texture.

The hardest part for me in any recipe is eggs. Slimy soft, glistening golden egg yolks go for a dip and whip in the cheese, and the whites get furiously beaten into submission. Another sneaky little swipe on my part from Joy of Cooking - add one or two more egg whites than yolks and the souffles will rise higher. Another little trick is to build a buttered parchment paper wall up around the ramekin, but what am I? I don't do parchment paper. Unless I'm composing the Gettysburg Address or something.

After I put the filled ramekins into the oven, it took every ounce of restraint in my body to resist the temptation of sneaking a potentially fatal peek. I just had to set the timer and wait. Holy smokes. Waiting sure is hard. But not if you're kept busy slicing dates, toasting walnuts, and making a honey-lemon vinaigrette. Every once in a while, I would stop what I was doing, and look longingly at the oven door. Then I'd catch the evil green kitchen timer ticking down in disapproval. Dates. Walnuts. Honey-lemon. It was tough to stay focused.

But after an eternity which was only really 19 minutes, I opened the door every so softly, ever so gently, and there they were, puffed and golden. I couldn't believe it. I made them! I wanted to scream, but I didn't. But I wanted to, really. Something told me to hold it in; to wait. It would get better. As we moved it all to the table, their tenuous trembling told me that if we didn't work fast, we'd lose the moment forever.

I took a fork and first tickled the soft and tenuous walnut sprinkled top. The fork pierced deep into the souffle, which made first made the faintest of feta sighs. *sigh* And then we just let loose. The edges were somewhat crunchy and somewhat chewy with the ground walnuts. (Next time, maybe toasting the ground walnuts for the ramekin would be better). The souffle was soft and giving, and had the subtle bite of buttermilk and the sharpness of feta. Rich, yet light. Naughty, but heavenly.

Every so often I'd break up the rhythm with sweet dates, toasted walnuts, and feisty greens (no prissy little spring mix here) properly dressed up in honey lemon vinaigrette. Salty, sweet and sour, every tastebud stimulated. Delicious delicious bite after bite!

Okay, so it wasn't quite that uh, orgasmic? But don't we all embellish just a little?

Besides, this souffle was my first time. 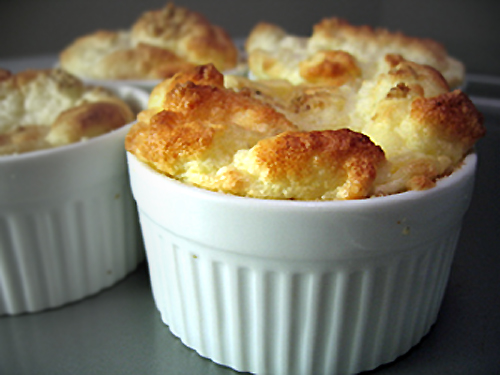 culled together from recipes found on the web, but mostly guided by the Joy of Cooking

Preheat the oven to 350 degrees F.

make the soufflé base:

In a small saucepan, heat milk, but do not let boil. Keep warm.

In medium saucepan on medium-low heat, melt butter until bubbling. Add flour and cook for 1 to 2 minutes, whisking constantly. Whisk in the warm milk, add salt, and continue cooking for another 3-4 minutes while continuing to whisk. Whisk in egg yolks one at a time to make sure they're fully incorporated. Stir in feta cheese as you remove saucepan from heat. Pour into a large bowl and set aside. This is the "soufflé base."

Take ramekins out of the freezer and place on baking sheet.

Fold about ⅓ of the egg whites into the soufflé base, then repeat with remaining egg whites, folding gently until completely incorporated, but without overmixing (ok, paradox). Divide the soufflé mixture among the ramekins.

Bake until soufflés are risen and golden brown on top, about 18-20 minutes.

(Most recipes instruct you to leave the oven door closed the entire bake time because the souffles have performance anxiety or something, but if you do not have a "window" on your oven, then what the fuck are you supposed to do? Just guess? At about 18 minutes, take a gentle peek. That's what I did.)

In a small bowl, whisk together honey, lemon juice and olive oil. Season to taste with salt and pepper. If the vinaigrette is "too strong," add a few teaspoons of plain water.

Toss greens with vinaigrette. Divide among 4 plates, and top with toasted walnuts and dates.