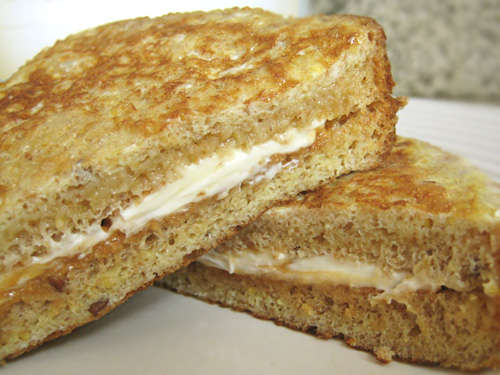 It might sound cosmopolitan because it’s called ooh la la “French,” but let’s be breakfastically honest with ourselves about French toast.

French toast is a breakfast dish for which people “settle.” If there is nothing glamorous about being crowned Miss 2nd Place, which is really Miss First Loser, which is the real name for the sterling silver and cubic zirconia tiara of "First Runner Up," then there is nothing glamorous about the remedial breakfast for people who are too cheap to buy the luxuriously uni-jobbing waffle iron or too unable to make pancakes. Pancakes, mine lovers, are a true test of kitchen prowess. Even the kind made from a mix.

Le Toast is French for “Delicious”

Which is why if my life is going to be represented by anything, it couldn’t be done so more accurately than this particular French toast. In so many ways, Peanut Butter and Cream Cheese Stuffed French Toast symbolizes everything about the current state of this haute hot mess known as The Delicious Life, right down to the fact that I don’t even remember the day I made it.

I remember which day I made it. Any girl who logs every single meal in a database that dates back to 2005 will know which day she made Peanut Butter and Cream Cheese Stuffed French Toast, not to mention that digital photography technology is so advanced that it wouldn’t be surprising if there were a “when you took this photo, you were wearing {blank}”-stamp in addition to time/datestamp on the photo. But that is not the point now, isn't it? The point is that I don’t remember any events that transpired during the day except cooking this French toast nor do I recall how I was feeling at the time, though if I were to say “stressed” and/or “exhausted” on the morning of Sunday, August 24, 2008, there is a 97% chance I’d be correct.

August? Yes, last August. That was over eight months ago, but an eight-month delay is not extraordinary. I’ve written restaurant blog posts so long after the fact that the space has turned over twice since. Besides, French toast is timeless, so whether I made it last August, last week, or this morning, I can always write about French toast. Now, had I just decided in my head to write about this particular Peanut Butter and Cream Cheese Stuffed French toast today, eight months after I made it, it would flow right into the rest of The Delicious Life, because as I just said (are you paying attention?), making fun of the alternates in the ladies' room never goes out of style.

However, my psychology has a mind of its own!

French toast stuffed with cream cheese and grilled on the griddle is essentially a breakfast grilled cheese sandwich, so I intended to post it sometime during the 30 days  on the Gregorian calendar known as April, or on the Delicious calendar as "National Grilled Cheese Month."

Which, of course, is now long past and does now, in fact, make this Peanut Butter and Cream Cheese Stuffed French Toast as Breakfast Grilled Cheese Sandwich woefully obsolete.

So even though I pseudo-excused myself for being 8-months overdue, I've actually missed a pseudo-deadline that was 30 days long.

Spring is the New "The Holidays"

Of course, missed deadlines are just a superficial symptom of an underlying problem that, in this particular case, has advanced to the terminal stage. What used to be "busy" is now complete and utter frenzy, and no matter what I do, I will never be able to keep up with the month of April.

I used to argue against the common perception that the month between Thanksgiving and Christmas lovingly referred to as "The Holidays" is the busiest time of the year. I don't know where this notion has its basis because In The Delicious Life, it was the month of February that was the busiest time of the year. The month often kicks off with the 2nd biggest sporting event of the year (after the Indy 500, of course), rolls into Chinese New Year, throws in the melee of Mardi Gras, and right smack dab in the middle of the month, rubs your four times broken heart into the emotionally bloodiest holiday of them all...President's Day.

It's about twice the fun in half the time. Well, maybe not quite half. And definitely not really fun. We are stripped of two days, leaving us with a mere 28 days in February to accomplish everything we need to accomplish for all these "holidays" and "notable events," and The Delicious Life has two special days that you don't: family birthdays, oddly uneven spread over the year, particularly since February is the shortest month.

But I renege. February is like August. Maybe September. Unless you have kids, in which case "Back to School" is your second worst nightmare because....

The new Holiday Hell is April.

From Fool to FU

Is it a wonder that the month starts with people screaming "Fool!?" Of course not. By the time the frenzy subsides, and you've dragged your battered bruised sanity across the 30th to lay limp and lukewarm, muttering something about May Day not because you're recognizing the rites of Spring, but literally, because you are begging for rescue, you will suddenly realize that the joke is, and always has been, on you. No one else but you has turned every April "event" of only marginal, if not suspect, significance into a holiday that has to be "celebrated" with a themed cake, pimpled with themed candles, on a tablescape that looks like a diorama of the Swiss Family Robinson surrendered at gluegun point.

Seriously? Come on. Who did you think was supposed to blow out the candles on a "Masters" cake? One of the little kids you forced to dress up like Tiger Woods?

Passover. Easter. Earth Day. You also have to eat a hot dog on opening day, pay your taxes, dance at Coachella, and what started this post and unfolded into all of this in the first place, recognize National Grilled Cheese Month.

And I won't even get into birthdays that, holiday hell nothwithstanding, have forever marred my every memory of the month of April. 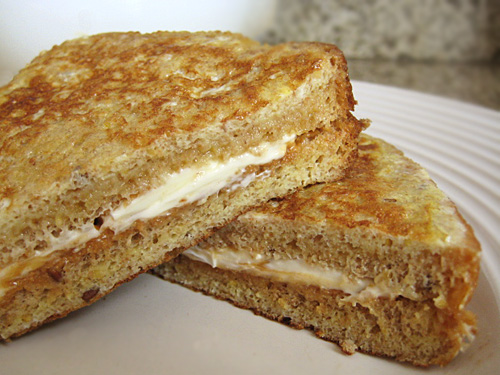 In a wide, shallow bowl, whisk together 3 large eggs, ½ c. milk (or cream, if you're nasty), ½ tsp vanilla extract, and a pinch of salt.

You can make real Stuffed French Toast if you have 4 slices of bread that are at least 1½" thick. Otherwise, you can hack "stuffed" by putting together 2 regular slices of bread (in which case, it truly is a sandwich). This is what I had to do with whole wheat sandwich bread.

Slice a "pocket" into each 1½" thick slice of bread, getting as close to the edges as possible without slicing all the way through.

** side note: Throwing a few slices of banana into the pocket is probably not a bad idea if your name rhymes with "pelvis resley," but we all know how I currently feel about bananas. **

Soak the stuffed slices of bread in the egg/milk mixture for about 5 minutes. While they are soaking, melt a pat of butter in a large frying pan over medium heat. Fry each stuffed slice of bread for ~ 2 minutes per side, until medium golden brown. You might need to add more butter to the frying pan after each piece of French toast.

You can keep the French toast warm in the oven, but seriously? Who waits that long until they're all done to eat?

Serve with sticky sweetener of your choice. We chose maple syrup.