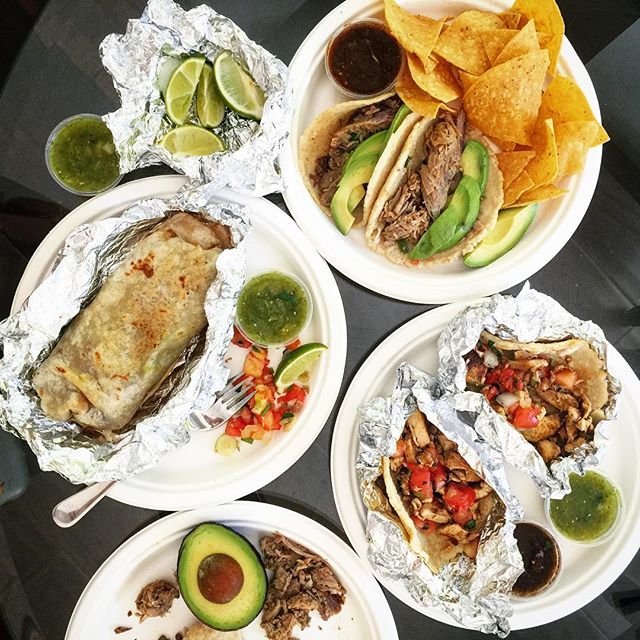 Post-workout, "we deserve this!" meal: carne asada, carnitas, and grilled chicken tacos, a giant "dos manos" burrito, and extra extra chips, all brought home so we could, of course, add fresh avocado.

My workout was last Wednesday.

Any workout for the first time can be intimidating, but the pilates apparatus looks like a cross between a medieval guillotine and modern terrorist torture device and is far more terrifying than any machine I've seen in my limited visits to "the gym." Along with stern safety warnings from the instructor, I was kind of terrified.

Obviously, I didn't know how to do any of the moves, and by the time I figured out what foot goes into which strap, the class was already switching to the next. The pace was fast. Moving between poses requires varsity-cheerleader-level coordination to hook and unhook bungees and slip body parts in and out of straps and belt loops. I had to stop more than several times to catch my breath and rest muscles that I had never used before.

By the end of the class, I was soaked in sweat, exhausted, essentially defeated. At the same time, though, I felt victorious that I had actually survived. We went up the street to Tavern and sat at the bar in our workout clothes, appropriate because we were in our Lululemons in Brentwood, inappropriate because they were still sweaty, and hydrated the only way I know how, with sparkling rosé.

Pilates feels like a great full-body workout, but as far as I can tell, it isn't really for me. Of course, I also said the same thing about yoga after just two classes, but now I do yoga all the time like four times a year.

And I eat tacos twice a week.