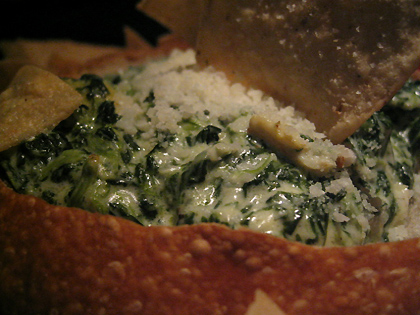 According to The Los Angeles Times on February 16, 2009 and their own MySpace page, Santa Monica Bar & Grill is now officially closed. No word on what is going to take its place, if anything at all (in this stupid economy). At least their tuna-flavored toamtoes outlasted my prediction by two years. *sigh*

You would think that after three failed attempts, the owners of the space at 3321 Pico Boulevard would wise up and do something other than simply change the sign out front, re-print the menu in a different font, and have a grand “re-opening.”

You would think they would wise up and oh, I don’t know, do something else.

Either the owners are not very wise, or they come from family money so it doesn’t matter that their crappy restaurant has failed three times. Three! Or perhaps I’m being unfair because it’s not one owner who has stubbornly tried to revitalize a dying restaurant three times, but a series of three different owners, none of whom have had the business sense to do some market research before buying the business from the previous owner.

The first time I went there, the venue was called Flint’s and was (almost) famous for its martinis served in a trying-too-hard trendydarkcool atmosphere. For some reason known only to no one, Flint’s was a favorite hangout of business school students even though there are much cooler places that are closer to the school’s campus to hang out and talk about Black-Scholes and compare Cockrum war stories. Nonetheless, I went those few times because I was *gag* “networking.” I also went there once with friends, sat on the sticky couch in the lounge area just on the other side of the bar, and had a chocolate martini. It made me *gag* too.

Perhaps that it was overrun with wanna-be-WallStreet MBAs, and that it was called “Flint’s” tainted my taste for the place. If I didn’t already think of a scary hellmouth dive BBQ joint in Berkeley everytime I hear “Flint’s,” (R.I.P) then I’d probably think “Flint’s” was a hellmouth dive Harley biker bar, which would actually be quite refreshing. It isn’t fair, I know, that I had pre-conceived notions about the place based on totally irrelevant, irrational associations, but hey, people do that. I do that. The fact of the matter is that aside from my own personal bias against the place, and despite the majority of it customers being people who are studying to be successful in business, Flint’s must have been operating in the red (doesn’t say much for MBAs, now does it?) or else it wouldn’t have shut down and re-opened as…

The name of the second incarnation made me roll my eyes. The restaurant named itself after the area code, as if there were some prestige associated with The 310. Beverly Hills is 310 – ooh la la. Santa Monica is 310 – ooh la la. Inglewood, all up in da hood, is 310, too, and the only other area code that seems to have pride about itself is The 909. We know how ooh la la the 909 is. (No offense to anyone living in the 909 – I’m just trying to make a point about fabricated pretentions about particular area codes). It reminded me of bars and restaurants that either didn’t have the creativity to come up with a real name and had to rely on something like an address or area code, or were just too cool to identify themselves. I went there only once when it was 310 Lounge. From what I could tell, the interior had not changed. We sat at the small bar toward the front, paid way too much for "tapas" that turned out to be disturbingly mediocre bar food, and left. I didn’t go back until it became…

Santa Monica Bar & Grille is the third, most recent, current incarantion of this “American” restaurant/bar/ lounge.

We had been up the street chatting away, totally oblivious to time and space, and inevitably, had overstayed our welcome in the bar by about an hour longer than K-Fed in Britney’s house. We trotted up the street to what we thought was still 310 Lounge. Under normal circumstances, I would have (silently) balked. This time, I didn’t care. We were having a good time and we didn’t want to prematurely cut the evening short. We just wanted somewhere to be.

Not until we had merrily side-stepped the sandwich board on the sidewalk and walked through the front door did I realize that it was no longer 310 Lounge. That was actually promising. Perhaps this third incarnation would be the charm for 3321 Pico Blvd.

The cavernous mini warehouse-like interior of Santa Monica Bar & Grille is exactly the same as the previous two lifetimes. We followed our host through the dining room cramped with tables but half-empty of people to one of the strangely majestic leather booths that line the perimeter of the room. The booths have high backs and sides so that neighboring diners can’t eavesdrop on your plans to take out Tupac, and are positioned such that every person sitting in any of the booths has a clear view of the entire dining room. A tiny halogen bulb, suspended from the high ceiling above hovers unnaturally low, lights only the table, protecting the identities of the people seated around it. It’s a very gangsta VIP setup.

Unfortunately, Santa Monica Bar & Grille is confused. As much as the setup is meant to feel like a dark and sexy and special supper club, it was all washed away when our bubblicious waitress in skin tight pants and equally skin-tight black baby t-shirt bounded up to our table with a flip of her bouncy Barbie blonde hair. She was like, omg, like toootally super friendly (!), in a Hooters sort of way. I think her name was Brandie. I am not joking. Okay, maybe it was Brandy with a “y.” Sheesh.

I joke about Santa Monica Bar & Grille going the way of a third rate Sports Bar, but to be quite honest, American bar food is in my top ten “cuisines.” I could make a full meal of Buffalo wings, nachos, French fries, and *ahem* avocado eggrolls (of all, only Buffalo wings are really “American” – go figure). I was delighted to order a couple of things from the Appetizers section, since we didn’t really need to eat a full meal.

Really now, how does one ever make a bad Spinach and Artichoke Dip? One does not. Even if a restaurant buys the packaged TGI Friday’s brand from the grocer’s freezer and thaws it in the microwave oven, it will taste good (which is actually just a theory, since I have never actually tried the TGI Friday’s brand of heat-n-eat Spianch Dip). However
, if you serve Spinach and Artichoke Dip with bad, curiously chewy chips, the Dip will taste like crap unless you scrap the chips and eat it with a spoon straight out of the bread bowl as if it were Clam Chowder on Fisherman’s Wharf.

I didn’t do that. The evening was going rather swimmingly and I didn’t want to risk grossing him out.

The Caprese Salad was okay, though I wasn’t quite sure why there were pita chips on the plate. They were crisper than the tortilla chips so I used them with the Spinach Dip. The tomatoes tasted like tuna fish. Thankfully, the cheese tasted like cheese.

In the end, we left most of both the dip and the salad before we left.

I am giving Santa Monica Bar & Grille until February. Maybe March. The space is cursed.

** a year ago today, i didn't trust half-price sushi at kabuki **