A Korean meal doesn't typically have a formal dessert at the end the way that many American, European, and even Latin cuisines do. With such a powerful sweet tooth, this is something I lamented long and hard as a child, and well *blush* even now. Most meals in restaurants are finished off with shik-hae, a sweetened rice punch that I just can't bring myself to call dessert. With it's dingy grayish brown color and little broken pieces of rice floating in it, I have always thought of shik-hae as Korean dish water.

If it's not shik-hae, then usually it's just fresh fruit after a Korean meal. Growing up in Texas and the Midwest, I envied all my friends who would have ice cream, pie, cake, cookies for dessert, whilst I had to eat grapes. Or apples. Or oranges. And I never understood how tomatoes were ever dessert. Oh the trauma of it all.

Korean cuisine does, though, have sweets and pastries. A slow drive through Koreatown, or even a stroll through one the Korean shopping plazas will come across at least a few Korean bakeries. Some are now large chains and some are still individual stores, but though they are Korean, most of what these bakeries make and sell are very western, or slightly Koreanized versions of western pastries. Regular cakes, cheesecakes, fruit tarts, cookies, and bread. Some of the things are a little more distinctly Korean, like some of the individual sweet snacking breads that are filled with more Korean type fillings: red bean paste, vegetables, or sesame. Still, they are all adaptations of western and European pastries.

But there is one Korean sweet that is very uniquely Korean - dduk. Dduk is a general term for a whole family of mostly sweet pastries made with a base of rice flour. Many people will call it a rice cake, but I choose not to, since dduk is absolutely nothing like those detestable diet puffed rice styrofoam disks. No, Korean dduk is similar to Japanese mochi, and comes in a huge variety of shapes, sizes, flavors, and colors.

There are some savory Korean dishes of dduk that's made from regular rice flour - dduk bok ki (spicy dduk sauteed with vegetables, sometimes meat, and ggoh-choo-jahng), dduk mahn-doo gook (soup with dduk and wontons), and sometimes, dduk is even thrown in with some jjigaes (hot pot). Strangely, though I refuse to eat rice, I never turned down anything, especially dduk gook at New Year's, with dduk.

Though there are a few savory dishes with dduk, the sweet dduks are innumerable. Even some of the sweet dduks are made with regular rice flour and made sweet with the addition of sugar or honey, and other ingredients, but many of the dduks are made with chap-sahl, a specific rice that is naturally sweet. Koreans serve dduk as a snack, or as a dessert. Enormous plates of perfectly placed colorful dduk indicate a celebration.

Dduk is sold in many of the large Korean markets and even in some of the bakeries, but these stores buy the dduk from somewhere else and only sell them in their stores. Dduk making is somewhat of an art, and in Korea, and here in LA's Koreatown, there are shops that are wholly dedicated to dduk. These are the stores where they actually make the dduk, like San Soo Dang in LA.

San Soo Dang is owned and operated by the Mom of David, an email friend of the Delicious Life. David doesn't have a blog, so he sent his thoughts to me for Dine & Dish no. 2, featuring his mother and her San Soo Dang. What a lucky guy, that David can look to his own family for the Queen of Cuisine! These are David's words: (by the way David - what's mugwort?!?!)
---------------------------------------------------------------------------
"My mom's dduk shop is a modest little place called San Soo Dang, located in a strip mall on the Northwest corner of 8th and Vermont in Koreatown. My mom raised me with a strong love of food in all its diversity and has been a great, creative cook for as long as I've been alive. I like to think she is the best dduk maker in LA, but I might be a little biased. I do know that her dduk catering is in great demand by many of the large Korean organizations and businesses, as well as for major weddings and birthday parties, and that she has been asked to cater dduk for the President of South Korea every time he comes into town.

"She and her husband studied dduk-making in South Korea for some time before they opened up their shop. This also lead to securing high-quality, organic sources for their critical ingredients, which they have shipped in regularly. Some of the cooler things about my Mom's dduk is that it is organic, not too sweet (actually many of the dduks are ok for diabetics) and folklore says that dduk has many good health properties.

"The bread and butter of her business at San Soo Dang are her injulmi and song pyun dduks. The main ingredients of injulmi are sweet rice, mugwort and soy bean powder. It is lightly sweet and a little messy, but very popular. Song pyun is made up of rice and mugwort as well, but has a small dollop of a sugar and sesame seed mix at the center of each piece, which makes it a little sweeter. 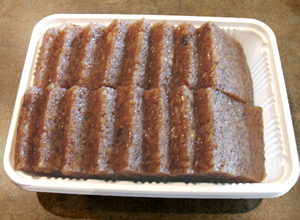 "Hobak shiru is another dduk that has been consistently popular since she began San Soo Dang. The primary ingredients are sweet rice, red bean,dates, pumpkin and chestnuts. It is a little stickier and gooier than the others, but almost always seen at the big Korean birthday and wedding celebrations.

"For a long time as a youth, yakshik was my favorite dduk - sweet rice, chestnuts, dates, pine nuts, cinnamon, brown sugar and a soybean sauce. I think I loved it because I have an intense sweet tooth, and this was one of the sweeter dduks.

"Modeum dduk is another dduk that should be familiar to many. It has sweet rice, chestnuts, dates, beans and pumpkin. From her base of the above staples, my mom tries to introduce different and new kinds of dduk. Young yang dduk is one of her more popular recent additions. Sweet rice, mugwort, beans, walnuts, almonds, sunflower seeds, dates, pine nuts, pistachios, and pepitas, which is a Mexican preparation for pumpkin seeds. I love how colorful it is.

"Hodo angko, made with rice, walnuts, red bean and mugwort, is another newer one. Hobak sulgi is made of rice, mung beans and pumpkin.

"My Mom sells quite a bit more stuff at San Soo Dang like yakgwa, gim-bahp, several kinds of boutique kimchees and other banchans and snacks. They are all wonderful, but ultimately it's all about the dduk."