When I used to have a real job with real co-workers and not this self "employed" daily blog-upation with virtual co-workers who pop into my dining room “cubicle” via IM, I didn’t know what half the people in the office breakroom were talking about when it came to prime time television. There was a period of almost two weeks when no one could talk about anything else but season premieres. The big, obvious dramas were the subject of passionate speculation, and strangely, even prime time’s new mainstream, the reality show, got quite a bit of discussion. How many bachelors fired their bachelorettes on an amazing race around the real world? I would quickly dispense the Kirkland brand coffee from the machine, grab a packet of Splenda, then duck out of the kitchen back to my desk. Good thing I kept my mouth shut because I thought Lost *ahem* was a reality show.

I have almost no knowledge of what goes on in the “real” broadcast tv world because the only channels I ever watch are the Food Network and CNN. I watch channel 55 for obvious reasons. CNN, however is a little harder to explain. *blush*

I have an incurable crush on Dr. Sanjay Gupta. *she swoons*

It started several years ago when I was glued to the television set watching the Middle East explode into sandy shrapnel all over the screen. Dr. Gupta, or "Sanj" as I like to call him, was embedded right there in the thick of it, reporting news from a medical perspective. I doubt I could tell you anything about what actually happened during that time, but I can tell you that Sanj was so incredibly hot in his desert camo and khakis. LOL!

I won’t go into why I developed this mad crush on CNN’s senior medical correspondent, for how does one explain how a crush just suddenly overtakes someone? I will say, however, that my crush on Dr. Gupta is certainly not surprising – I had an even bigger crush back in high school on Suresh, the all-star, all-state tennis playing salutatorian. Ever since that senior prom with Suresh who is now a doctor somewhere on the east coast (what? you don't google your ex-flames?), ever since my nights and days with a brilliant neurosorgeon reporter via television, I have never gotten over my Indian fever.

something tantric above wilshire blvd

So it’s easy to see why once again, I have made my way to India’s Oven.

Tantra’s India’s Oven was just “India’s Oven” the last time I ate there, but I suspect that the ownership has changed, and to distinguish themselves from India’s Tandoori a block away, or India’s Oven in Westwood, the new management added “Tantra.” For a Hindu god’s sake! The place couldn’t scream more loudly to me with its name. ;)

The restaurant, though conveniently located on Wilshire just east of Barrington, is quite inconveniently located in an office building with deep dark underground parking, hidden entries, narrow hallways, and oddly zig-zagging staircases. By the time you find your way out of the parking matrix, you realize you’ve only made it to the entrance for Tony Maroni’s Pizza on the ground floor. Tantra’s India’s Oven is one more flight of stairs, on the second floor. Sometimes though, having to wait a little, having to work up to it, makes it that much better.

The interior of the restaurant looks exactly the same. Somehow though, now with the new name “Tantra,” what once I thought was too-dimly-lit is now dark and mysterious. What was formerly a sadly outdated ‘70s basement rec room decor is now retro-kitschy romantic. Eerie red lighting, mirrors, and shadows thrown by flickering candles feel less like a horror movie and more like...sexy. Even a seat that used to be drowned out by Metro Rapids grumbling down Wilshire Boulevard is now really a romantic table with a second-story view.

The menu is also the same as before, and not surprisingly, the same as just about every other Indian restaurant on the Westside. Meats from the tandoor range from an $8.95 chicken tikka to fish and rack of lamb for $14.95. Tantra has typical curries, which are all about $8.95 a la carte. Though it seems par for the Indian course, Tantra gets extra points for having a full bar. A full bar!

It’s fairly clear by now that there is a small, unchanging roster of things I eat at Indian restaurants – chicken tikka masala, saag paneer, bengan bhartha, and aloo gobi. If I’m feeling especially adventurous, or if a bottle of IPA has gotten the better of my sensibilities, I may wander into pure tandoor territory. The point is, when it comes to Indian food, I am very...missionary-style.

It must have been the name, Tantra, that put some strange spell on me as I looked over the menu and pondered what to order. I had all but a sip or two of water and yet I was feeling as hot as a spoonful of straight green chili achaar. I wanted something to try something new and different. I felt crazy. Wild. Chicken? No, baby, how about something different for a change? Tonight, I want a real animal. Something that walks on all fours. Bring me...lamb.

garlic naan to ease into it

When the food came to the table, conversation quieted. Are we really doing this? Am I really going to try something totally new and exotic? We had to ease into with garlic naan - something familiar first, then the rest. Saag lela is lamb that has been marinated and cooked with saag (spinach). Either the marinade or the cooking method, or perhaps a combination of both, had rendered the lamb so tender that the meat fell apart with a fork, and the saag had practically melted into a dark green, vegetal butter. I couldn’t believe I was eating lamb, but more importantly, I couldn’t believe how much I liked it. The saag lela was making me *mmm* with every little bite. 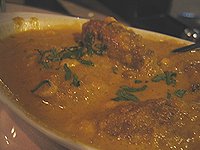 We even broke out of the usual vegetable routine and selected randomly from the menu as if we had been blindfolded. Malai kofta are chopped vegetables, beaten and bound together into croquettes, and served dripping with a luscious, creamy golden sauce. I have no idea what went into the sauce, and I couldn’t quite place a spice that was familiar but not usual, but whatever it was, I think I may have even been sent into some head thrown back, eyes-half-closed Indian vegetable demi-trance, likely letting go occasional giggles and sounds of pleasant surprise.

Tantra’s India’s Oven was not an earth-shattering experience with respect to the restaurant itself nor the service, for even with the change in name, it is still not really all that different from the other Indian restaurants on the Westside. However, it was fun to try something new – dishes that I wouldn’t normally order were surprisingly good and now, have added to this Indian fever.