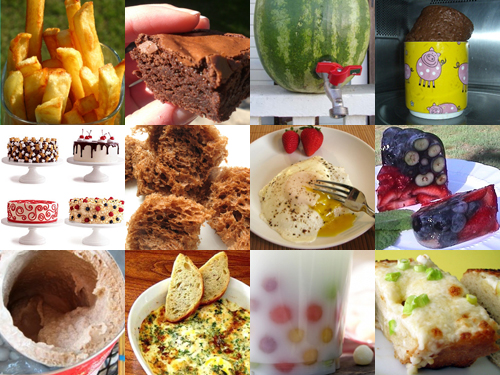 Just a quickie with pictures and links to catch ourselves up with what was Hot! Fresh! Then! last week ending 08.02.2008 on TasteSpotting, the thing that has been sucking the cream-filling out of the Twinkie that is my life as of late (as bitter as I love to be and sound about it, I honestly don't know what I would do with myself if I wasn't running on Costco coffee fumes until 3 am every morning working on this stuff). These are the user submissions that went live and got the most *raises eyebrows* action during that week. Don't ask me what "got action" means. I really wouldn't know.

I am making a few (hopefully snide) remarks about some of the submissions here because I just can't help myself. Trust me, you'd get this way too if you stared at 250x250px pictures of ridiculously good looking food for 24 hours - it's the same kind of sarcastic, cynical attitude you have toward beautiful women if you stare at runway models for a living.

If you'd like to comment on Rachael Ray's use of Teddy Grahams to decorate a cake, feel free to do so here since there is no commenting over on TasteSpotting for reasons that will remain known only to me until next Wednesday. Oh, hell, why wait until an arbitrary day like Wednesday to tell you? I will tell you! One of the bullet points in the grand list that is TasteSpotting's mission statement is that the site serves as a gateway to blogs that might not get as much exposure otherwise. So, if readers are compelled to make a comment on something they see on TasteSpotting, we would rather they click through to the originating site and contribute to the discussion there.

Okay, so do we all feel better about why TasteSpotting doesn't have commenting?

Now then, about last week's posts. It appears that as "foodie" as we may all claim to be, we have a curious obsession with French fries, Rachael Ray, and microwave cooking. Go figure.

I'll have the next set of data up shortly...

« Tastepotting Top 12, week ending 7.26 and the Easy, Online Data-ing Way Out
Top 20 Burgers on TasteSpotting (That I Won't be Grilling This Weekend Because...Why Start Now?) »