He lives in San Francisco. He is an attorney. He is young, hot, and knows how to use the paddle attachment.

Sorry, Jason. It will never work out between us.

We were scheduled to meet up with Jason on Friday afternoon – Happy Hour after a nasty work week for him, refreshments after a nasty cow-scented drive for us. We needed only to say, “Let’s meet for drinks.” Where I usually start asking, “What kind of drinks – cocktails, or beer and wine? Food, too? What part of town?” we didn’t have to say anything else because Jason always takes care of everything. He’s like that. Jason takes care of everything.

taken care of by the bear

We were scheduled to meet at the Thirsty Bear because Jason always picks the perfect place. It’s near his office so he can walk, which he always does even though he has sweet ass attorney-afforded wheels. We walked from our hotel, which was “only five blocks.” I’d like to take a moment to mention that “only five blocks” is a phrase out of the mouth of Decepticons. It may look like it’s “only five blocks” on the map, but five blocks in San Francisco is 1) equivalent to about 25 normal blocks, depending on the direction, 2) 25 normal blocks feels like 47 miles for an LA girl like moi who drives three blocks to get pizza, and 3) very windy. Wear flats (thankfully, they’re back "in" this season!) and your hair pulled back in a ponytail.

As long and marathon-like as the walk seemed, we arrived at the Thirsty Bear before Jason did. The restaurant looks small from the outside, but inside, the space is big and warehouse-like. The spacious front bar area spills past the glass-protected brewing contraptions into the regular dining room in the rear. The dining room was empty, but at 5:00 on a Friday afternoon, the tables in the bar area were full after we took the last available one toward the back. Stairs lead to a rec room upstairs, which was cordoned off for a “private party,” but since the bathrooms are upstairs, I suddenly had a Curious George-like urge to use the Ladies’ Room. It looked like either a happy hour gathering of co-workers from a small, young, web-related company. There's a pool table up there.

beer for the monkey, cocktail for the lush

Even if the Thirsty Bear did not have “Brewing Company” attached to its name, it would be very obvious that they are a beer place once you’re there. Aside from the silver mini-Strange Brew vats along one wall, Thirsty Bear’s beers are listed on chalkboards that create the top part of a frame around the actual bar, and there are sets of taps at regularly spaced intervals along the bartop. I left beer to the monkey, looked at the specialty cocktail menu out of habit, not true desire for whimsically named sugaar shakes, then ordered my first Citron/soda of the weekend.

When Jason got there we started our study of the very straighforward menu of Spanish foods, heavily weighted toward tapas. There were a few ensaladas, a few heartier reciones, and a couple of paellas. I was interested in ordering everything.

Now let me explain why I was extremely excited to try the food at Thirsty Bear. I had always been a grazer. Korean meals are made up of bahn-chan, or small side dishes to go with rice, so it was a style of eating I had grown up with. Even at non-Asian restaurants and meals, I never kept my fork to my own plate, and promiscuously reached across to dining companions’ plates to taste a little of this, a little of that. Dining out, I often found myself making meals of a couple or more appetizers, asking the server to space them out with my drinks, rather than ordering one large entree. While I was in college, the first seeds of my love affair with tapas were planted when, without ever having tasted a single bite of authentic Spanish tapas, I had read about the then soon-to-open Thirsty Bear and its menu of Spanish tapas, which after doing research, sounded like it had been made for my palate. Not only did the style of eating fall in line with my personal eating habits, but the flavors – pickled, brined, preserved, strong, garlic-heavy, oily, fishy – were like a Mediterranean version of Korean food. I couldn’t wait to try it.

Then I graduated from Cal and moved to LA to chase my big dreams of big bucks in the consulting world before I had a chance with Thirsty Bear. That was a long time ago.

I love tapas. There are some restaurants in LA that serve them (some better than others), and I have even made them at home for parties, but Thirsty Bear in San Francisco is like David the dark, brooding guitarist on whom I had a massive crush in high school. It’s that one that you never touched, but the idea of him is what started your weird “thing for” musically-inclined middle eastern guys that faded out after a couple of years when you discovered that your real “thing” is for sweet, soft, sensitive, nerdy white guys. Tapas, however, never faded out. 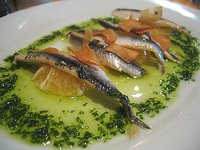 Jason said “have to” for the aceitunas, and I said “have to” for boquerones. Jason said we could order the boquerones, but he wouldn’t eat the boquerones, kind of the way Kate Moss orders dessert, but won’t eat it (unless it’s dusted with powdered...never mind). I stopped. In fact, I think I might have *gasp!*ed. Jason doesn’t like anchovies?!?! How could this be? I don’t know a single food freak who doesn’t have love and appreciation for small, oily fish, and Jason is definitely Le Freak of Le Food! But more importantly, if he didn’t like anchovies, that meant...that was a clear sign...that was an omen...we were doomed. Jason and I would never be able to *ahem* you know. Jason and I would never be able to share in the pleasure of...eating anchovies together.

As is always the case, presentation affects my palate, and the glossy black and green olives piled high in a glazed ceramic dish looked like perfect little polished stones. They were unusually warm, which made their olive flavor really stand out, and salty, the perfect excuse to order another drink. The boquerones were fantastic. I did a Lindsay-on-Paris-and-vice-versa on the citrus and chive oil garnish, completely ignoring them and zeroing in on the beautifully shiny, silvery fish. They made me shiver in all their fishy stank.

i only got one ball, but all the fish

We also ordered albóndigas. The meatballs were tender, and unlike albondigas I’ve had that were in a lighter, tangier sauce that was overwhemlingly tomatoes, Thirsty Bear’s sauce was thick, dark, and laced with luscious mushrooms.

pluck up the parsley

We weren’t intending to eat a full-meal during the happiest hour on earth, which was a shame because I would have loved to try a number of things that I have attempted to make in the past. The tortilla espanola is something I’ve cooked before at home with nothing to which to compare my efforts. My tortilla espanola tasted great to me, but I still don’t know if it tasted right. The same is true for gambas al ajillo. Calamares fritos was our final choice, which is not very adventurous, but I certainly never mind ordering something that is very rarely, if ever, not good. The calamari were tender, the breading was thin and airy crisp, but the things I kept greedily plucking out for myself were the fried parsley. The only negative thing I can try to say about the calamares fritos is that it seemed like quite a large portion to be served as tapas. And that’s a stretch, just to find something negative.

We had just gotten to San Francisco. We had a lot of trouble yet to cause, and anchovies doesn't even begin to describe it.

** a year ago today, i am an asian fusion hypocrite, and we were The OC **