Updated recipe and ingredients resources for my version of Dak Jjim, a Korean sweet, soy-braised chicken below. Original version of the recipe from 2006 at the end of the post. Big difference eight years later? Better photograph.

The original recipe had coating on the chicken (sometimes flour, sometimes cornstarch, which thickens the braising liquid into a "sauce"), refined sugar, and plain white potatoes. Eight years — and many iterations, some pictured in the instagrams below — later, the updated recipe has dropped the unnecessary starch coating, uses date sugar and less of it, substitutes sweet potatoes for regular potatoes, and adds other vegetables like radishes or mushrooms.

I'd like to think that my Dak Jjim is now healthier, though there wasn't anything too terribly unhealthy about the previous recipe. "Healthy" is a subjective term.

By the way, there are recipes for Dak Jjim that are spicy, that use additional seasonings and spices, or that include other ingredients like noodles. They are good, too. 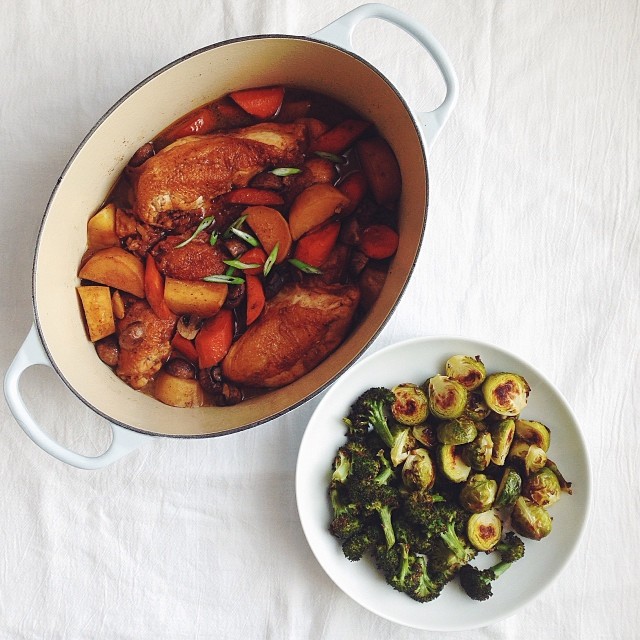 Perfecting It, Dak Jjim with Carrots and Mushrooms, late-October 2013 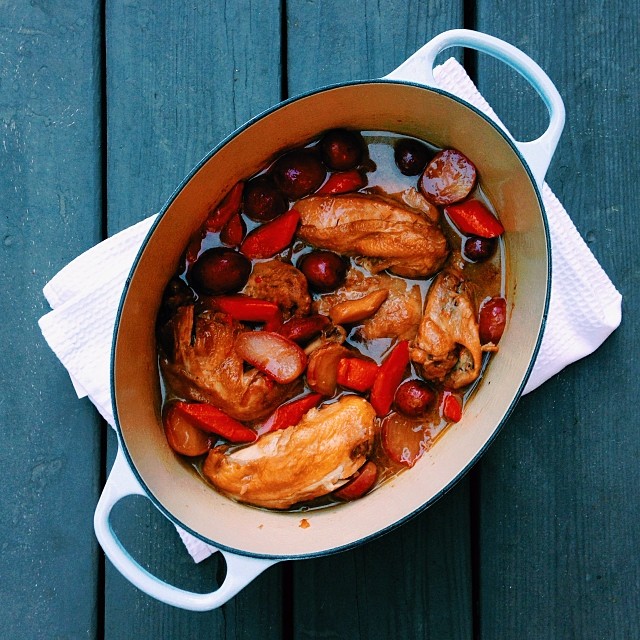 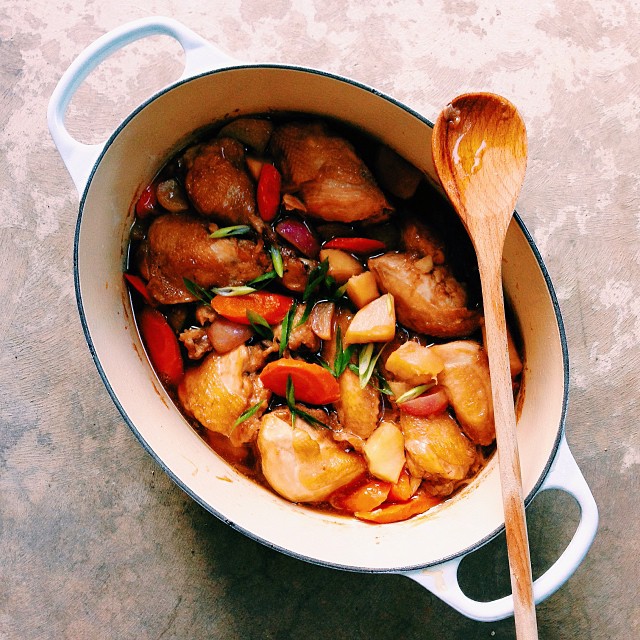 This recipe uses one whole chicken cut into 8 pieces, or 10 pieces if you cut the breasts in half because you have a strange issue with large breasts like I do. You can also use an 8- to 10-piece colonel's combination of thighs and drumsticks, but a chicken made up of all thighs and drumsticks just doesn't seem all that natural, now does it?

Serves 4 happy, social friends in one sitting, or a single girl who sadly eats leftovers of a whole chicken for dinner in solitude 6 nights in a row. Not that I ever did that. Not even back in 2006.

Season chicken pieces on all sides with a generous amount of salt and pepper. Heat about 2 tablespoons grapeseed oil in large, deep pot over medium heat. Place chicken in pot skin side down and brown, about 6-7 minutes. Turn chicken over and brown flesh side, about 4-5 minutes. Remove chicken to a plate (I actually use the turned over lid of the pot I'm using).

Pour off the chicken fat from the pot and discard. Add another 1 tablespoon of grapeseed oil to pot. Add garlic, ginger and sliced onions. Cook until onions are just starting to brown. Return chicken, along with any juices on the plate, back to pot, placing pieces skin side up. Add cut vegetables to pot, pushing them in between the pieces of chicken.

Combine tamari, rice vinegar, sugar, and chicken stock in a small bowl (date sugar will not dissolve). Pour over the chicken in the pot. Bring to a boil, then turn heat down to low, cover the pot, and simmer until chicken is tender and cooked through, about 50 minutes. Every 10-15 minutes during cooking, check on the pot. Tilt the pot, grab some of the braising liquid, and pour over the top of the chicken so it doesn't dry out. If the braising liquid seems to be evaporating too much, add a little bit more chicken stock.

Serve with steamed brown rice (or quinoa) and kimchee.

This actually taste better the second day after storing the entire pot in the refrigerator. Scrape off the congealed fat from the top, bring the dak jjim in the pot back up to a boil, reduce heat and simmer for a few minutes until everything is heated through.

~ chicken: from Puritan Poultry/Marconda's in the Original Farmers' Market at 3rd/Fairfax, LA
~ organic, gluten-free tamari: by San-J available in most grocery stores and on amazon
~ rice vinegar: Eden Foods Organic Brown Rice Vinegar
~ date sugar: Aunt Patty's Unrefined Date Sugar available on Amazon, I bought mine at Erewhon Natural Market here in LA, here are some other organic date sugars on Amazon
~ chicken stock is homemade, but any organic, low-sodium store-bought is ok, too
~ any and all produce, organic, from local farmers' markets or Whole Foods Market 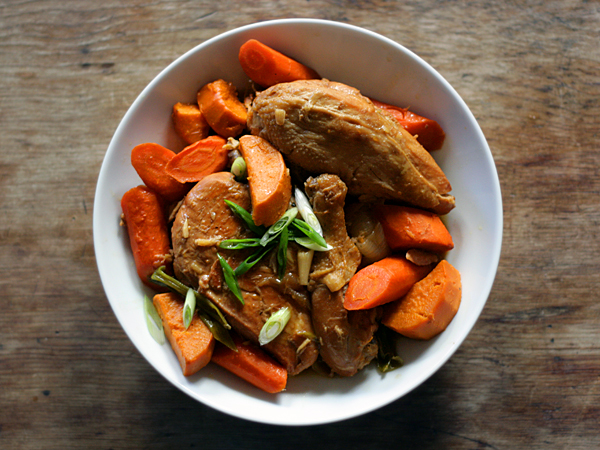 Wash and pat dry parts of 1 whole chicken. I also like to cut the chicken breasts in half because I might have something against big breasts.

(You can also use an 8- to 10-piece colonel's combination of thighs and drumsticks which is so delicious I have to stop myself. )

Place the chicken in a medium bowl and toss with 1 Tbsp each of rice wine (sake), soy sauce, and corn starch. Massage this marinade into the chicken. Cover the bowl and put into the fridge while preparing the vegetables and stewing liquid.

Coat the chicken pieces with all purpose flour, shake off excess, and brown the chicken parts on all sides in about 2 Tbsp canola oil in a large pot over medium heat. The chicken will give off a lot of oil, too. If you want to drain the excess chicken fat from the pot, go ahead. I just leave it in the pot because it tastes better.

~ chicken: from Puritan Poultry/Marconda's in the Original Farmers' Market at 3rd/Fairfax
~ organic, gluten-free tamari: by San-J available in most grocery stores and on amazon
~ chicken stock is homemade, but any organic, low-sodium store-bought is ok, too
~ any and all produce, organic, from local farmers' markets or Whole Foods Market
~ Revlon Mochaccino nail polish is no longer available, but any creamy brown with a slight burgundy/red undertone works
~ gold nail striping tape available on amazon
~ base: essie 'Fill the Gap!' ridge filler and base coat
~ Chapelle des Bois Fluerie wines available in smaller, specialty wine stores (not grocery stores or any "big box" type beverage warehouses)

Through the first month of the new year, everyone does exceedingly well with sticking to their New Year's resolutions. We watch what we eat, we go to the gym before or after work five days a week, we keep the alcoholic drinks limited to the weekends, and though we go through serious withdrawal symptoms like headaches and crankiness, we stop smoking and drinking coffee. We are good.

It's always easy to burst out of the starting gates with a bang, but let's face reality — we're sprinters. The lot of us are not made to last the entire marathon of goodness. After January ends, we start to wheeze a little. The bacon, blue cheese, eggs and avocados aren't bad for me - they're on a Cobb salad. I can cut down the number of my workouts by one this week, which is effective when you work out once a week to begin with. A couple of glasses of wine with dinner every night won't pickle my liver. And once the weekend hits, you wake up with a wicked hangover from smoke (it's second-hand, I swear!) and Ketel/sodas and the only way to cure that is with a double sugar chocolate mochaccino lottabucks. We make excuses, give in a little each day, until we've completely spiraled ourselves out of the race, right back to where we started — the end of the previous year, fat, tired, wired, and hungover.

After that intro, the logical next paragraph should go into how I am going to do my best to not allow that happen. I should write about how I've made it as far as the second week of February and how I am going to turn myself into a marathoner and really stick to the New Year's resolutions, at least through the end of the shortest month of the year.

Ta-dow? Obviously one of my resolutions is to yank myself out of the '90s.

The other, more realistic resolution is to Search for My Seoul, which is my clever way of saying that I wanted to learn about my own Korean heritage by eating at more of those Korean restaurants in Koreatown, and more specifically, by cooking more Korean food at home. I'm going through some strange heritage renaissance, which probably isn't even the right made-up terminology because "re-birth" implies that at some point in my past I was Korean. And though I always have been Korean, I didn't really own being Korean. In fact, I probably tried to sell off my Korean-ness for two dollars in one of the many garage sales we had when we lived in very non-Korean suburbs of either Cincinnati or Detroit.

I want my two dollars.

"Dahlk-jjim" is how the name of this home-style braised chicken stew is pronounced in Korean. I make fun of standard Romanization of the Korean language a lot, and I almost fell out of my chair when an old recipe book of my Mom's said "Dark Jim," like, "It's starting to get dark, Jim." I didn't go to han-gull hahk-yo (Korean school) for nothing. Say it like "dahlk-jjim" is written. And the "jj" is a cross between "j" and "ch."

As you can tell, I'm trying to learn French Korean French this year. 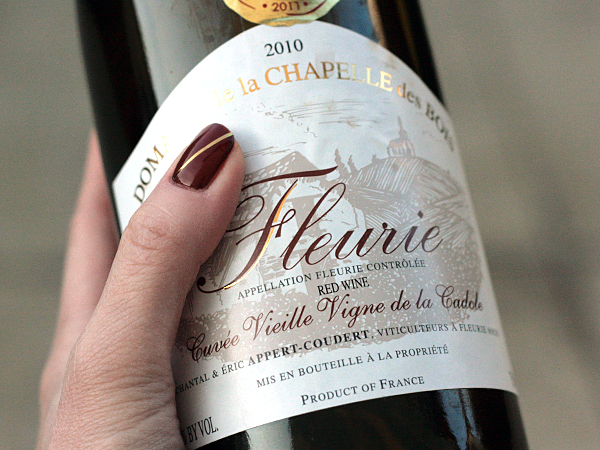 Domaine de la Chapelle des Bois is a grower in the Beaujolais region, specifically Fleurie, of France. Beaujolais is generally a good match for Korean foods. Don't ask me why. I haven't gotten that far in my studies yet. 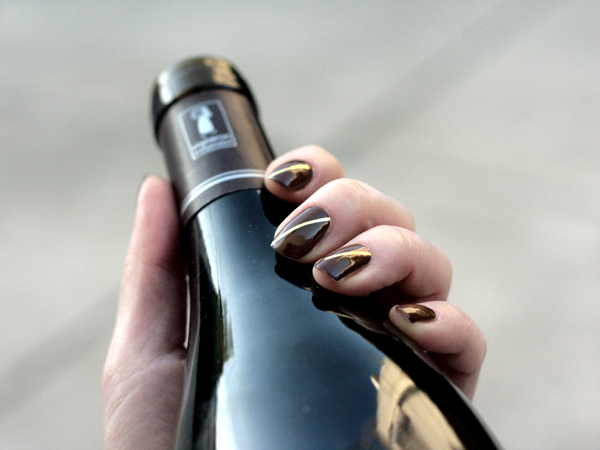 Mochaccino is a very old burgundy/brown color in Revlon's nail polish line. I found it at the bottom of my polish basket, where it's been hidden since 1997, separating into carcinogenic components that will cause alien nail mutations. It was the right color for Chapelle des Bois's Fleurie label though, so I used it. And then I threw it away because I told myself I would purge my closet and drawers of all things that would embarrass me if I were ever to be surprised by the Hoarders team. 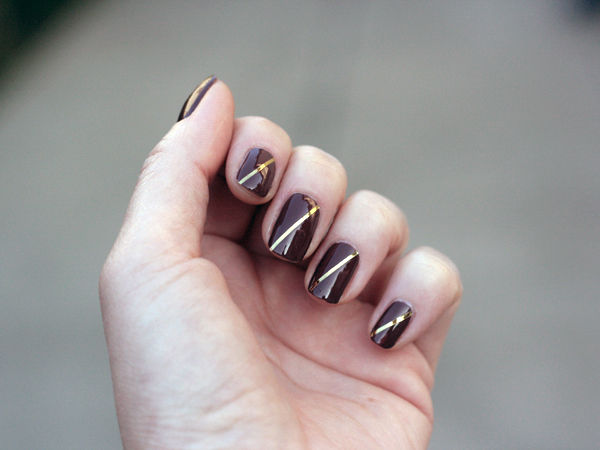 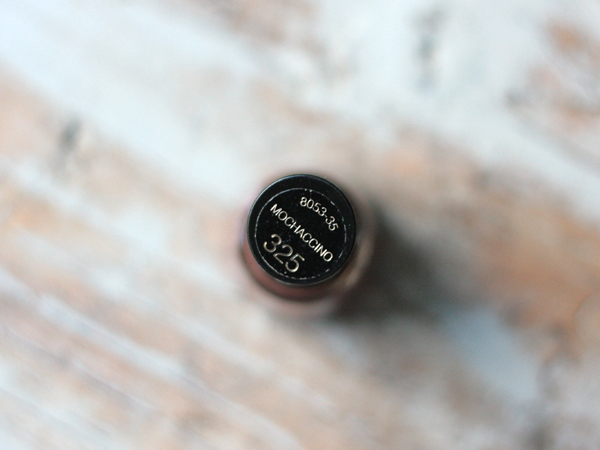