Home » cooking » Jennie-O Oven Ready Turkey - Free Rider Economics, Free Bird and What to Do if Your Turkey is Still Frozen

Sometimes I "Refresh Network List" in my Wireless Network Connections window just to see who my neighbors are. I read their names, or the names they’ve given their networks, and I make up stories in my head about them. Making up stories is what you do when you’re exceedingly creative. Or slightly mental. I think it’s also what the Pilgrims did to entertain themselves when they stayed in again on a Friday night because they didn’t have TV, B.C.

(Before Cable – please pardon my Rachael Ray habit of filling in acronyms.)

Okay, so I don’t "Refresh Network List" just to see who my neighbors are. I am not that creepy. I am also not exceedingly creative; I'm just exceedingly cheap resourceful. Basically, I am trying to free ride someone’s wi-fi because I have now been gainfully funemployed for two years and cannot afford to upgrade to a fancy wireless router plan on Time-Warner’s broadband monopoly on the Westside.

You may have no idea where I am going with this right now, but neither do I. This kind of random, free-associative blogstream of consciousness is what happens when a sleep- and caffeine-deprived food blogger is left alone in the kitchen with nothing but fresh herbs, multiple twitter accounts, and an unreliable internet connection. I am just going with the "Free Rider" theme because the wireless connection from RickKevinHome is “Very Good” and I may as well take advantage of it.

RickKevinHome. Brothers? College roommates? Gay married couple? A guy who goes by his first and middle name? Must be from the South. Or a racecar driver.

I guess I am exceedingly creative!

Free riding is a normal, natural phenomenon that occurs in everything from public transportation to internet connectivity. Free riding, in and of itself, is not negative.

However, free riding can become a problem when free riders, aka "Americans" over-consume public goods like military service, without paying for them, leading to severe market failures in the economy. Market failures, as you can guess from the existence of the word “failures” in the term, are bad.

"Economy," as you can guess from the word "economy," is also bad, but isn't it about time we stop blaming this imaginary recession for everything and take some responsibility for our greedy choices? I should have paid attention in my upper division Econ classes so I could brilliantly solve all of this country's economic problems.

I also should have majored in something more useful than economics. Like Art History. Or Statistics. Then I really could save the economy by playing in Vegas with the Treasury. I'm Korean. I'm a natural.

This is the economic Free Rider Problem: "How do we diminish the market failures caused by free-riding like under-production and over-consumption?"

Or, in more accessible Statistics terms: "What is the probability that there will be under-production of a freview of the over-consumption of a free bird?!"

By the way, I took Stats 21 three times at Cal.

The answer, my friends, is O, as in Jennie-O Oven Ready Frozen Turkey. 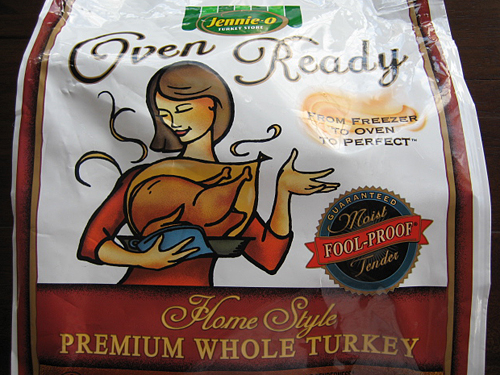 When Jennie-O offered to send me a free sample from their Oven Ready Frozen Turkey line to review, I was reluctant because 1) I don't always post reviews in a timely fashion and 2) I was already biased against the product expressly for what it is. Oven Ready turkeys go directly from the freezer to the oven and cook at 375 degrees in a plastic bag.

I was an economics major. That kind of science scares the shit out of me.

However, the thought of a WHOLE turkey that could feed my family of myself for a day or an entire village in Orange County swayed me toward the free rider economics of "yes." 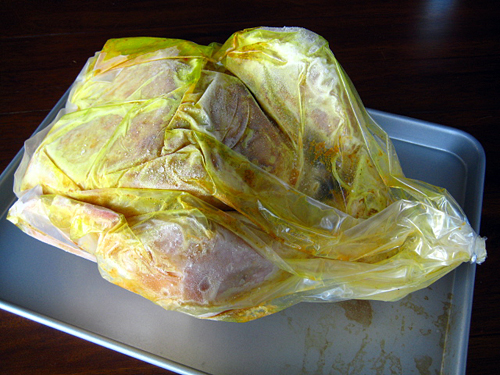 The frozen turkey in the bag is unattractive, but that is obviously an unfair statement since thawed turkey outside a bag is also unattractive, and really, turkeys are just unattractive. I worried about what and/or why there was school bus warning yellow coloring inside the bag. Then I stopped worrying about it because the cartoon woman with the steaming turkey at her breast on the Jennie-O bag sure isn't worrying about anything. 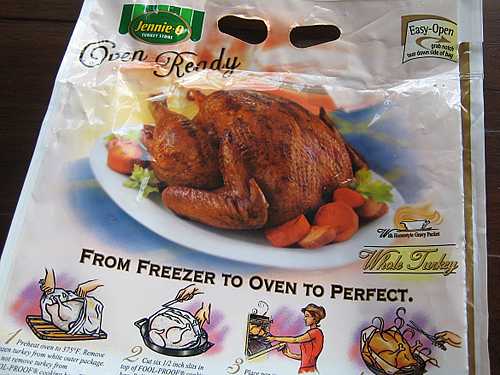 The directions are on the back of the bag. Every step says "FOOL-PROOF." Just wanted to point that out. 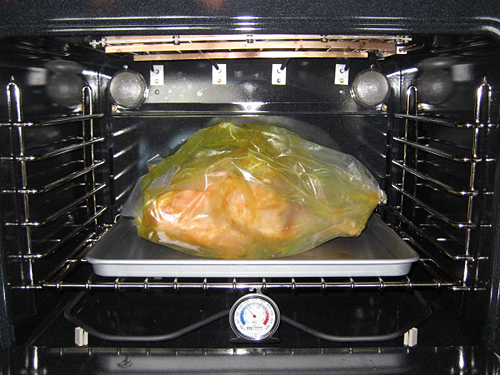 I pre-heated the oven to 375, cut ventilation slits in the top of the bag, and put the turkey in the oven. I was really nervous about the plastic bag. My younger sisters are new Moms and you know how intense and crazy and fucking scary new Moms get about plastics. I have never been scared of plastic until my sisters had kids. I couldn't wait for the turkey to come out of the oven with a giant tumor and mental problems. 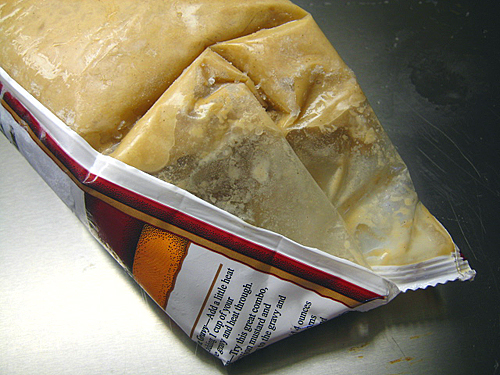 The turkey, of course, comes with gravy because if you're effortlessly roasting a frozen turkey in a plastic bag...okay, I have nothing clever to say here. It's frozen gravy. 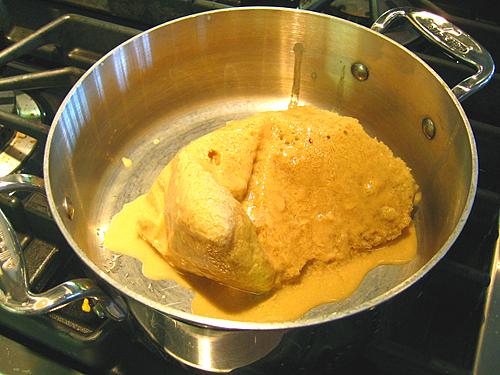 Frozen gravy looks worse than frozen turkey. I was also kind of surprised that we "made" it on the stovetop. I am sure there would have been a way to microwave it, but the packet is fairly big. The gravy ice chunk that plops out probably wouldn't fit well into a microwave safe bowl.

The Jennie-O Oven Ready turkey when completely roasted, wasn't as pretty as every other turkey I've roasted, and certainly didn't look like any representation of turkey on the bag. The skin was uneven, pale in places, blotchy with suspicious dark spots, stretched out, and lacking the glossy, taut crisp of a regularly roasted, fresh turkey. On the serving platter, the legs fell open, one of which was exposed down to the bone where the plastic got stuck to one of the legs, tearing off meat and skin when the bird was removed from the bag. Pardon the use of a poultry-as-porn cliche, but Jennie O came out of the bag looking like a sad, beat up, trashy, desperate whore.

However, as unsexy as Jennie-O was, it was true to its promise of "moist" and "tender."

The reality of the Jennie-O Oven Ready turkey is that it accomplishes exactly what it sets out to do: a completely effortless turkey that tastes pretty good. It cannot, but does not intend to, compare to a fresh turkey over which one has fussed for hours - no, days - planning, thawing, brining, and roasting. The Jennie-O Oven Ready Turkey is expensive, sure, but time is money and if you can't spend the time, then you pay money for convenience. It seems like the perfect solution for busy people who don't have the mental and refrigerator space to start thawing a turkey three to four days in advance. As long as they're not parents who freak out about plastic.

So what did we learn from this little lesson in Free Rider Economics?

Who Else Tried the Jennie-O Oven Ready Turkey?

Incidentally, the Jennie-O Oven Ready Turkey would be a fantastic Plan B if you realize, on Thanksgiving Eve, that your regular turkey is still frozen. Of course, this means that you STILL had to have had the forethought of buying the Jennie-O Oven Ready Turkey in advance of Thanksgiving, which means that if you plan that well, you'd never be in a frozen turkey situation in the first place.

If your turkey is still frozen and you don't have access to a Jennie-O Oven Ready turkey, there are a few things you can do to save your dinner.

What to Do If Your Turkey is Still Frozen:

If you make this discovery several hours in advance of cooking time, you can "flash defrost" the turkey and proceed roasting as usual. Just place the turkey in a large container and run cold tap water over it until it thaws.

According to the Mayo Clinic, you can roast a frozen turkey. It will just take longer, you have to wait to remove the giblets package in side the cavity, and you can't cook stuffing inside the bird. As a guideline, add about 50% of the usual cook time. You have to keep checking the turkey in the oven as it starts to warm. When it is sufficiently thawed, go in and remove the paper/plastic package of giblets inside the turkey's main body cavity. Continue roasting as usual.