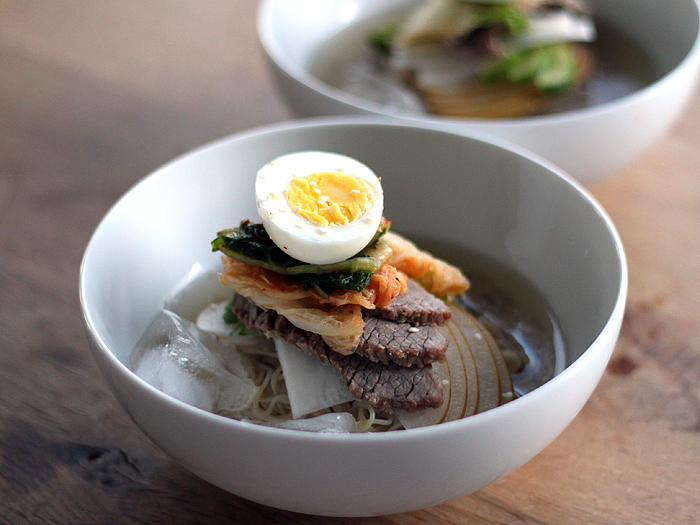 Recipe and resources first, story and a list of a few restaurants in Los Angeles (Ktown) at the end.

At the Korean market, you will find naeng-myun in the Asian noodle aisle or with Asian noodles in the refrigerated section. Many of the brands sell the noodles in packages along with powdered soup base and serving seasonings (kind of like packaged ramen). I throw these packets out and make the broth from scratch. There will be times when you are tempted to rely on the packaged seasonings. It won't taste as good, but go ahead. It's not like I'll find out and hate.

Naeng-myun noodles consist primarily of buckwheat, but can also include arrowroot, corn, and sweet potato starches, as well as regular wheat flour. The different combinations will all differ ever-so-slightly in color, taste, and texture from one another, but for the most part, it doesn't matter. The only noodles from which you want to differentiate for sure are dang-myun, which is used for jap-chae and other soups and stews (thicker, more transparent like "cellophane," and more slippery), and buckwheat soba ("squared off" and not bouncy/chewy).

My version of the naeng-myun soup, the "mul" (which means "water") part of Mul Naeng-myun, is clear, light, and tangy, making it refreshing to me. Other recipes, particularly well-known restaurants, use very rich stocks as the soup base, often resulting in a somewhat frozen-but-gelatinous texture, since the soup is supposed to be cold. This is too weird for me.

Recipe Timing Recommendation: Start cooking the beef first to make the soup base. You can wash/peel/slice/prep all the vegetables and make hard boiled eggs while the soup is cooking, and then chilling (could be a few hours!). Naeng-myun noodles take about 5 minutes to cook; cook them just before serving.

Make Soup/Cook Beef: Rinse beef brisket, then place in a large pot, and cover with water by 1 inch. Bring to a rolling boil and allow it to boil out for about five minutes. Turn off the heat, carefully pour out the water with all the foam and fat, rinse off the beef and the pot (wipe out any foam/scum that sticks to the side), and add chicken stock, filtered water, garlic, ginger, onion, daikon radish, salt and peppercorns. Bring to a boil, the reduce heat and simmer for about an hour, covered, with just a little bit of space to let some steam out. The soup will reduce to about ¾ the original.

Once the beef is cooked, remove it to a plate and put in the refrigerator to chill and "set." When the beef brisket is cool enough to handle and more "solid," slice it against the grain as thinly as possible.

Strain the soup through a fine mesh sieve into a heat proof container. Chill the soup for a couple of hours in the refrigerator, you can also let it chill overnight.

Once the soup is chilled, stir in additional salt and pepper to taste, vinegar, and sugar.

Cook Noodles: Cook the naeng-myun noodles according to the package: bring water in a large pot to a boil (you can probably use the pot you used to cooke the beef/make the soup). Turn down the heat to medium and let cook for about 5 minutes. Drain into colander and rinse with cold running water several times while gently "massaging" the noodles. Drizzle the rinsed and drained noodles with sesame oil and gently massage the noodles to distribute the oil. Divide the cooked naeng-myun noodles among serving bowls right away because the noodles are somewhat "sticky" and start to clump together fairly soon (if they are left without liquid/broth).

Prep Naeng-Myun Bowls/Serve: Top the noodles in each bowl with a few slices each of Asian pear, cucumber, rinsed cabbage kimchi, beef brisket, and half a hard boiled egg. Carefully ladle soup into bowl around noodles. Add ice cubes to the soup in the bowls. Garnish with toasted sesame seeds and serve with additional vinegar (using the pickling brine from the radish works well), hot mustard, and kimchi. 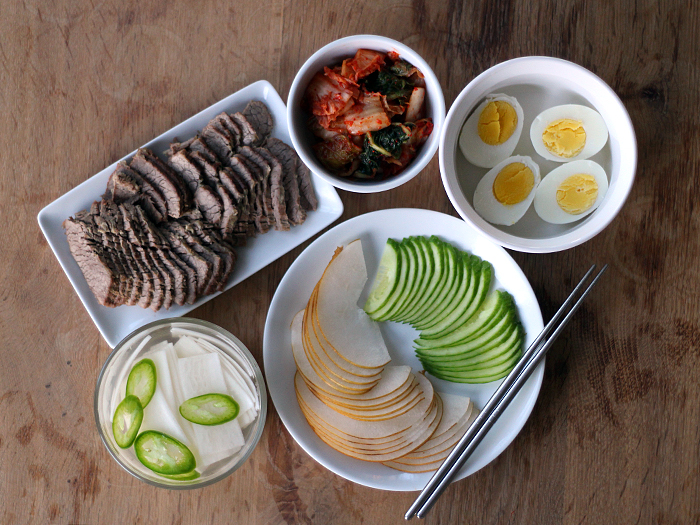 ~ beef brisket: I usually try to get my meat from Marconda's Meat in Los Angeles, but this time, Whole Foods Market because it's too fucking hot to drive all over town for ingredients for just one meal.
~ chicken stock: homemade and frozen, though I keep Imagine brand Organic Free-Range Chicken Broth in my pantry
~ naeng-myun noodles: Wang brand, Galleria Market in Koreatown, Los Angeles (see photo below)
~ kimchi: Ocinet brand at H-Mart
~ any and all groceries from Bristol Farms or Whole Foods Market 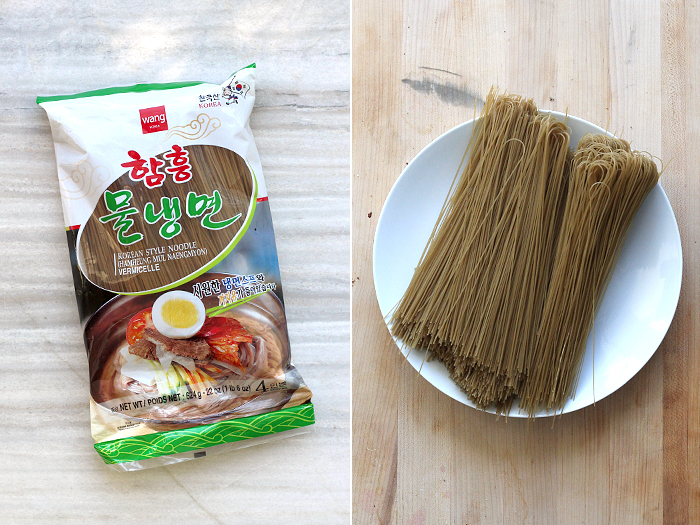 Beef brisket for soup base and eating: 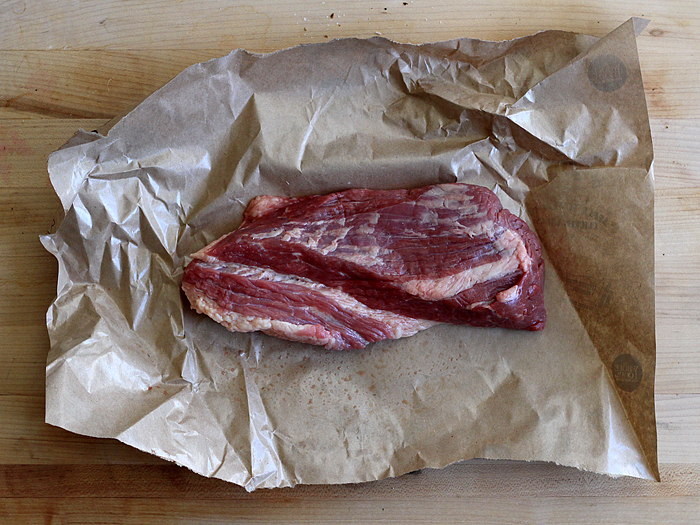 I'm taking the heat as Mother Nature's very dramatic call to check off a few "Things" from the summer bucket list I've posted every year for the last 10 years or s and have YET to complete. But sometimes, the journey is more important the complete checklist or something, right?

So here is #32 of the 94 Things to Eat, Drink, and Wear This Summer, naeng-myun 냉면, specifically mul naeng-myun 물 냉면, a chilled/cold Korean dish of buckwheat noodles, sliced fresh Korean pear, cucumber, pickled daikon radish, sometimes kimchi, and sometimes thinly-sliced beef brisket, in a vinegary, subtly sweet broth that has been cooled down with ice cubes. The entire dish from the ice to the buckwheat has cooling effects on the body. 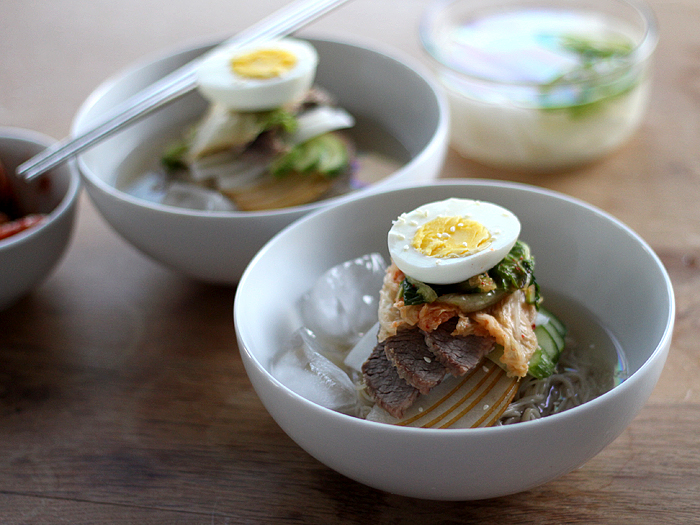 Naeng-myun, prepped in bowl for serving: 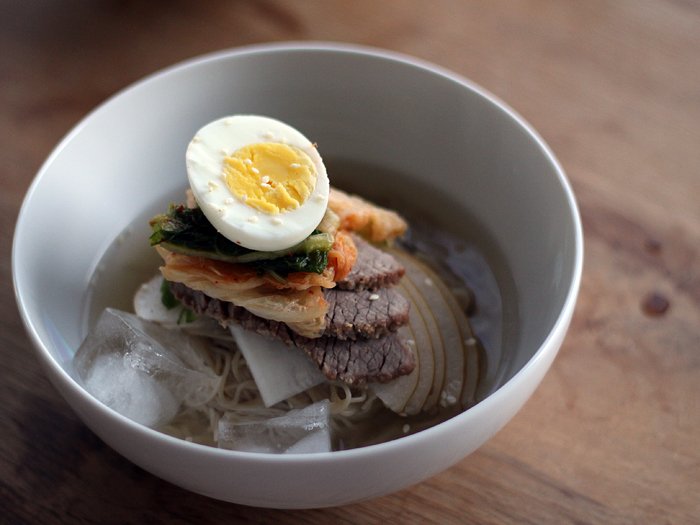 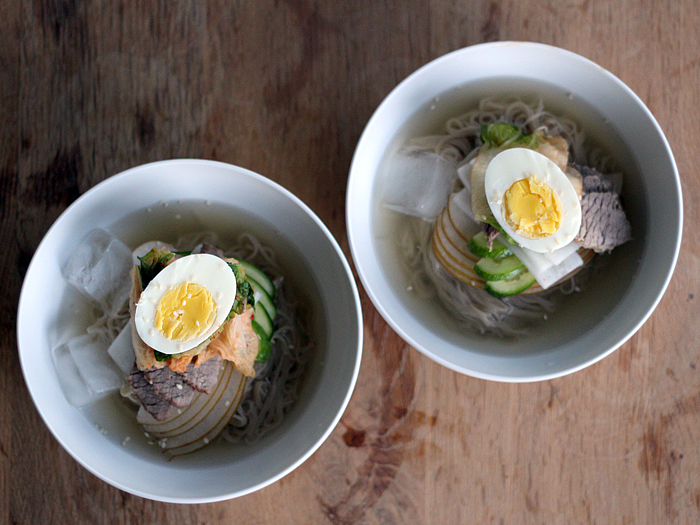 Where to Try Naeng Myun in a Restaurant

If you've never eaten naeng-myun, try it in a restaurant first because the taste, temperature, and texture together is something to get used to. In LA, there are a few restaurants that specialize in naeng-myun, though many Korean restaurants that specialize in BBQ or serve a variety of traditional foods will probably have naeng-myun, too.
~ Yu Chun Chic Naeng-Myun (Koreatown, Los Angeles) seems to get the most, and highest, raves. I like it, especially the cups of straight broth you can drink. There are two locations {yelp}
~ Ham Heung Naeng-Myun (Koreantown, Los Angeles) {yelp}
~ Chilbomyunok is a BBQ restaurant, but is also known for their naeng-myun. {midtown lunch review}
~ I've tried the spicy, soup-less version (bibim naeng-myun) at Dong Il Jang