At least, according to my daily horoscope.

As much as I find horoscopes to be complete and utter nonsense, not only for what they say, but how they say it, I find myself reading mine all the time. Not "every day" while I'm sipping my morning coffee because that could still be considered, you know, fun and feminine and very sex-and-the-city, but All. The. Time. I have my Astrosource bookmarked and keep it as an open tab in my browser so I can conveniently click and read the exact same paragraph over and over all day long until it no longer applies because it's the next day. Sometimes I'm checking back to see if what just happened was actually predicted by my horoscope. Usually, it isn't but I tell myself that it can't cover everything. But most of the time, I'm wondering when, WHEN, will that VIP reach out to me with the good news I've been waiting for that might have to do with real estate or for the single Gemini girl, a potential romantic or platonic (wait, what? platonic?!) interest?

All the while I am saying out loud, “Bull. Shit. This is such bullshit.”

And then I'll click on to read my other horoscope because I was born on the cusp of Gemini and Cancer. Whoever said life isn't fair because I don't get anything (me) was wrong because in this instance, I get two horoscopes. Not only is one of my astrological signs the dual personality, but I have two astrological signs, both of which I read because one side of me knows these things are malarkey and the other side of me wants so badly to believe in something. It’s enough to make me crazy.

Oh, excuse me. We are crazy.

Maybe it’s that there is some tiny glimmer of hopefulness that maybe, just maybe, Dionne Warwick and her confederation of star-gazing psychic psychos know what they’re talking about, even though I know they’re just…psycho. It’s a silly, strange attraction – the same kind you have to someone who is so totally wrong for you – you know it, he knows it, and you even tell each other it would never work – and yet you see each other anyway because maybe, just maybe.

I know horoscopes are nonsense because if you are a freak like I am a freak, you have read the ten other horoscopes for no good reason other than maybe you were adopted and they got your birthdate wrong so you might actually be a Scorpio, and you know that every single one of them is the same. It's a formula. (Love + Family + Work)*(Vaguely Positive Prediction that Applies to Anything) = Horoscope for the Day. Hell, even I could write a horoscope. Aries? Libra? Virgo? Let’s have a go at it.

You're even more quick-witted than usual. Imaginative connections come fast and frequent, which is a lot of fun -- and it could turn out to be quite useful. You're able to understand problems and situations more quickly than other people. That gives you a leg up, whether you're at work, playing a game of logic or simply enjoying a conversation with a friend.

You can't tell me that that did not just apply to you. It did! It so totally did!

It applies to everyone. And no one. Bland. Generic. Universal. Take out the name and slip in another and you get... 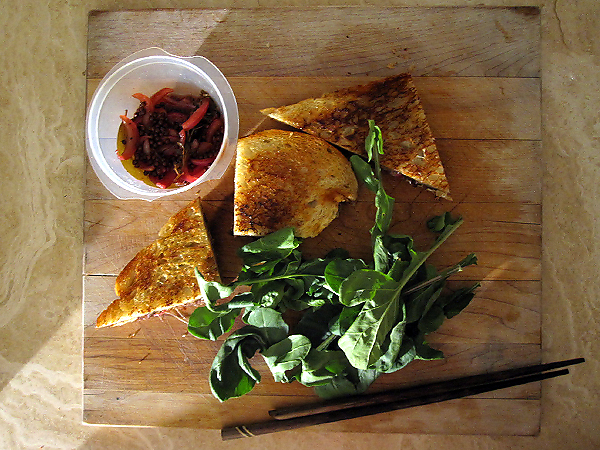 Just like the 12 horoscopes on any given day, the grilled cheese sandwich on any give plate is a universal formula. (Bread + Cheese + FlavorAccomplice) * (Butter^Heat) = something for which every foodie forward person will bow down and eagerly hand over upwards of $18.

That's what I did the first time I grabbed with my hands and wrapped my lips around smokinghot chef Govind Armstrong's Short Rib Grilled Cheese Sandwich at his now-retired Table8 restaurant in LA. Buttered, charred bread + meltingly awesome cheese + a pornographic amount of pulled short ribs spilling out onto the plate. Up until that moment, grilled cheese sandwiches were nothing more than Wonder white bread and Kraft singles with the crust cut off for my niece and nephew. But I bowed down. I wept (seriously), so subtly k-dramatically that chef Armstrong wrote "stop the tears" on the title page when he autographed a copy of his cookbook we bought that night. Though I don't know how much the sandwich cost because I didn't pay for my meal that night (foodwhore!), I'm sure the sandwich cost somewhere in the latter half of the teens, at least in the 2007 dollar equivalent. 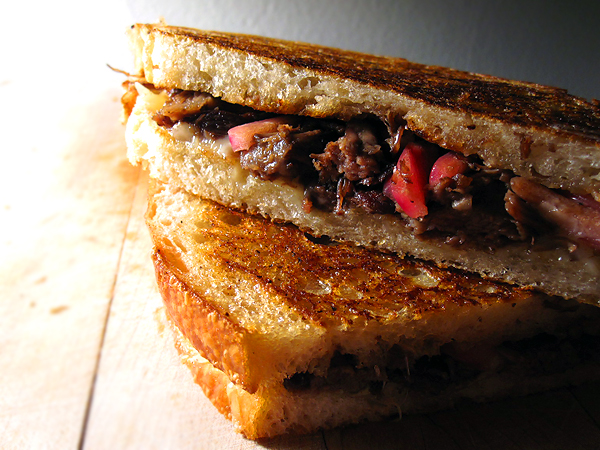 Grilled cheese sandwiches, as I've written, are just a simple formula. However, the meat of this particular sandwich (pun totally intended because I'm fucking clever like that!) is red-wine braised short ribs and the additional "flavor accomplice" is pickled red onions, so I am presenting this recipe, which explains how to make both.

for the Short Ribs

to Make the Short Ribs

Beginning with a large saucepan or braising pan with a lid, heat the tablespoon of grapeseed oil over medium-high heat. Season the short ribs with salt and pepper. Sear the short ribs on either side until caramelized and golden brown, about 5 minutes. Remove the meat from the pan. Add the carrot and celery to the pan and cook for 5 minutes over the same heat. Add the onion and garlic. Cook together until caramelized, about 5 minutes, stirring occasionally as needed. Add the short ribs back to the pan and deglaze with the red wine. Add the sachet and, stirring from time to time, allow the wine to reduce until almost evaporated, about 6 minutes. Pour in the beef broth and bring the braise up to a boil. Put the lid on and place in the oven for 2 hours. Stir occasionally.

After the first 2 hours of cooking time, remove the lid. For the next hour, baste the short ribs every 15 minutes, leaving the lid off. Cook for an additional hour, until very tender, for a total of 4 hours cooking time.

Pull the short ribs from the oven and allow them to cool in the braising juices for at least a few hours. Carefully transfer the meat to a plate and strain the juices through a fine sieve, then allow the fat to rise. Remove the fat. Using a dinner fork in each hand, lightly shred the meat along the natural grains in a pulling motion from the center outward, and set aside.

To Prepare Each Sandwich

Begin by preheating the oven to 350°F.

Take 2 slices of bread. On the bottom slice, place a layer of cheese, just enough to cover the bread to the edges, then top with 1 teaspoon of pickled red onion, spread to the sides. Place ¼ cup of the pulled short ribs on top, add another layer of cheese, and top with the second slice of bread. Brush each completed sandwich on top and bottom with ½ teaspoon butter.

In a cast-iron pan over medium-high heat, add 1 teaspoon of the grapeseed oil and allow it to get nice and hot. Place 2 sandwiches in at a time and flip so they will absorb the oil on both sides. Weight them down with a small sauté pan. After 1 minute, flip the sandwiches, return the weight, and place directly in the oven.

After 2 minutes, remove the weight. Flip the sandwich one final time, and cook for 1 final minute. Pull from the oven, slice diagonally, and serve immediately. Repeat with the remaining sandwiches.

Wrap the parsley, thyme, bay leaves, and peppercorns in a small amount of cheesecloth and tie with butcher's twine.