There is a big difference between an excuse and an explanation.

Or make an excuse.

In the first quarter of last year, there was >>this<< article in the Los Angeles Times. Though the article wasn't about me or this personal little blog, it mentioned "The Delicious Life" enough times — ok, mentioned just once but like so many things, sometimes once is enough, dammit — that I thought it would encourage me to start blogging regularly again.

"Lots of people read the LA Times!" I said to myself.

"They will see the name and clickmob The Delicious Life!" I hoped.

"They need something, anything, to read that's more recent than 2006 so I should start blogging again!" I concluded.

So I sat down at my desk to write.

I ended up flipping through Thomas Keller's Ad Hoc at Home cookbook and made Garlic Confit.

Days later, my blog was nominated for >>this<< award. Saveur is, you know, kind of a big publication so it's kind of a big deal, and though it's quite an honor just to be nominated, it's an even bigger honor to actually win. I am competitive. I am a first-born daughter with a lot to prove to her immigrant parents. I wanted to win.

I thought the possibility of winning would push me into blogging again. I want to win! I can win! I will write winning blog posts because I! Am! A winner!

I sat down at my laptop to write like a fucking champion.

I overdosed on green Cerignola olives instead.

And a few days after that, there was >>this<< food blogging conference. Though I went there as a speaker, someone who would share all her knowledge and tips and awesomeness (I don't have any of that stuff, but it seems I'm really good at marketing myself!), I came away receiving a lot more than I gave and I thought it would inspire me to blog again.

"The other speakers were so informative! The sponsors were so generous! The attendees were so inspiring and energetic and full of personality! I will go home and do an event recap! Shoutout to the sponsors! Be all lovey dovey kisskiss with all the awesome people I met and do the reciprocal link love stuff!"

So driving back from the event, I was all excited and mentally fist pumped, silently shouting "fuckyeahblogging!" I started drafting the post in my head in the car. We stopped at Din Tai Fung on the way back and thought to myself "These soup dumplings could be the subject of a blog post!" Sometimes you have to push yourself, go out of your way, go to a little trouble, take a risk, and drive the fuck out to BFE to go to a good blog event or eat good soup dumplings!

It was the perfect theme tie-in. A post was fate.

When I got home, I immediately ate the leftover dumplings.

And then we went to France.

An article! An award! An awesome conference! Three pretty big, remarkable things early last year, which aren't even the three roundtrip flights I took for the first time in years.

Life, it seems, got in the way of, well, writing...about life. 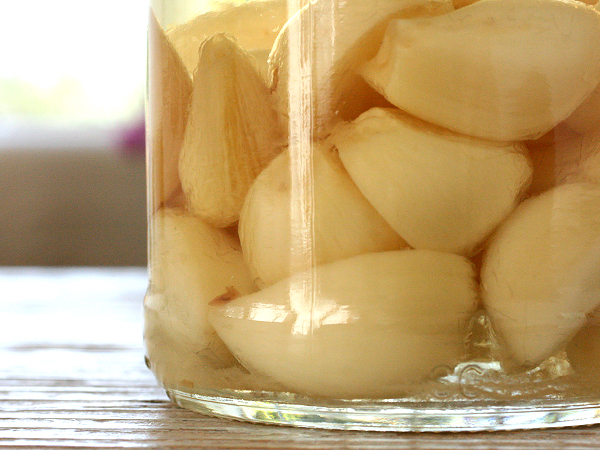 adapted from Ad Hoc at Home by Thomas Keller

Though the end result is similar to roasted garlic — sweet, mild, ultra tender garlic that can be used in many ways — garlic confit requires presence. You can't just wrap a head of garlic in foil, throw it in the oven and oh, I don't know, go upstairs to your office and blog about something for 40 minutes while it roasts.

You can however, make garlic confit, then blog about it almost 11 months later.

Set the saucepan on a diffuser over medium-low heat.

(What normal person has a diffuser?! I don't, so I just put the saucepan straight on the burner.)

The garlic should cook gently. Very small bubbles will come up through the oil, but the bubbles should not break the surface. Adjust the heat as necessary and/or move the pan to one side of the diffuser if it is cooking too quickly. Cook the garlic for about 40 minutes, stirring every 5 minutes or so, until the cloves are completely tender when pierced with the tip of a knife. Remove the saucepan from the heat and allow the garlic to cool in the oil.

Refrigerate the garlic in a covered container, submerged in the oil, for up to one week.