Recipe for Thomas Keller's Cauliflower Gratin from Bouchon cookbook is at the end. Scroll down.
...

Every morning, I make a mind-numbing 90-second commute from the bedroom to my "home office," an antique desk (read: "garage sale") shoved behind the couch into a crowded, cramped corner of the living room in the same one bedroom apartment in which we've been for the last six years. I grind and churn there for 18, 19, sometimes 20 hours a day, ignoring the tiny world around me, separated from the rest of the room physically by a 24" monitor. That's nothing compared to the distance created by time, difference, and indifference.

Sometimes a phone will ring. A device will vibrate. But other than that, it's almost dead silent.

At the end of every night, I heave myself out of my chair. I used to stand in a final stretch looking toward the sitting area, searching for encouragement, inspiration, motivation, but those have all long since faded. These days, I've already dragged myself halfway to the bedroom before I pause for just a moment to look back out of the corner of my eye with something of a pathetic hope. Maybe...?

I always go to bed by myself.

Or worse, with my laptop.

Five years now, almost six, of...nothing. Well, no. Once — maybe twice — in a moment of diet-deprived depression mixed with desperation, I mistook heat from too much wine during a silent dinner for lukewarm passion. There was an awkward grab, confusing hope, clumsy shuffling, hopeful confusion, familiar but unfamiliar expressions, stumbling toward the kitchen, before sobering to the realization that, yes, yet again, the magic wasn't going to happen.

And that cumbersome, heavy, too complicated copy of the Bouchon cookbook goes right back to where it always sits.

Northwest corner of the marble slab coffee table, barely broken binding visible to me from my desk, though I never see it.

When I first opened it, I turned every page. Without reading recipes, I stuck tiny non-committal post-it flags on pictures of foods I wanted to make. Roast chicken! Quiche! Even French words for simple things like a tuna sandwich made them sound too sexy to not make - Tartine de Thon a la Nicoise!

As beautiful as it is though, the book is also big. No, it's huge. The Bouchon cookbook is so enormous that it rivals the marble slab I currently have in front of the sofa for coffee table status. I could barely haul the thing across the room to the kitchen, let alone make room for it on the countertop in my closet of a kitchen, especially when open to double its width. And even when I mustered the strength and space, I realized that the recipes, even for something as simple as a tuna sandwich, are as complicated as their French pronunciation for a girl from Dey-twah.

The post-it flags fell off, one by one.

But something happened in the last few weeks the broke through the monotony that had settled in after five years. A new cookbook, obsessive search journeys through the night for Ad Hoc recipes, giveaways, signings, appearances, and a blowtorch. A new restaurant, VIP parties, red carpet, and the Kellerati. Buzz. Hype.

That wicked feeling which lay crushed under the weight of a book was coming black. Magic.

I was looking at the Bouchon cookbook like it was brand new to me. The PostIt flags came back out, but this time more careful, placed with real intent, cautious reads before more commitment. Roast Chicken, again. No Quiche this time. Maybe the Moules au Safran et a la Moutarde. 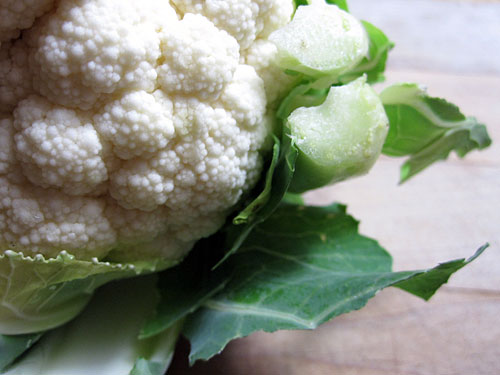 It seemed like an uncomplicated way to ease back into a love affair with Bouchon. Side dishes are simple. Gratins are forgiving. Cauliflower is...

...in the hands of Thomas Keller? 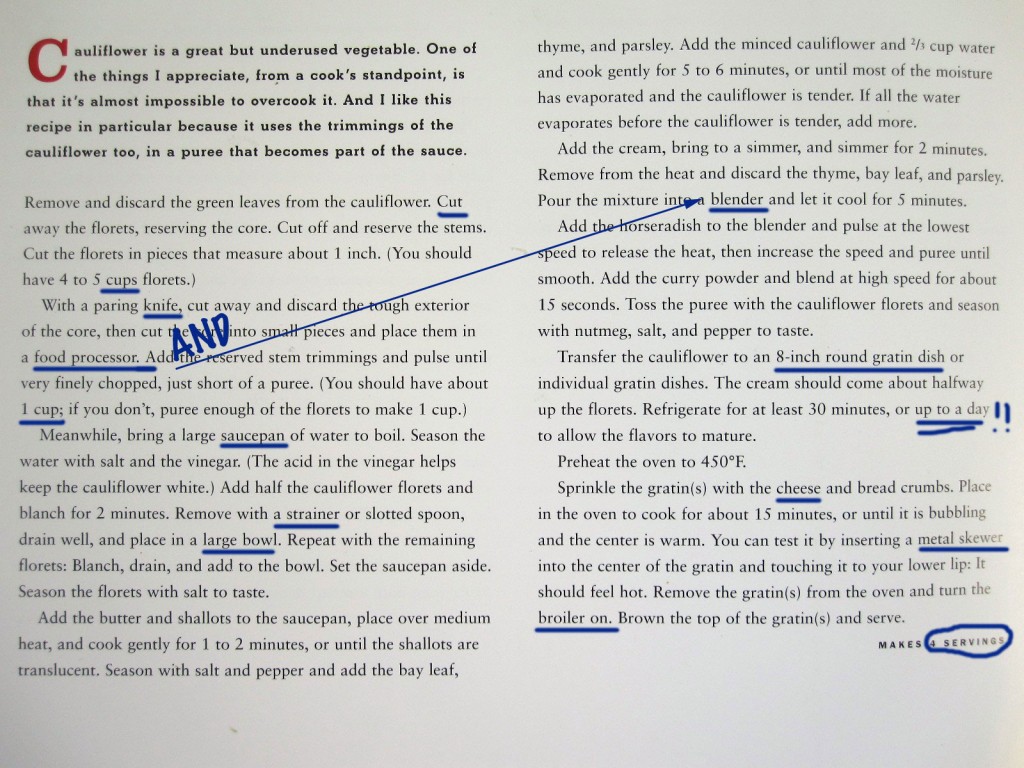 The list of ingredients for the gratin is not unusually long, and the directions fit onto one page. However, the recipe is complicated. It requires advance planning. A lot of attention. An entire entourage of high maintenance machines. A luxury suite's worth of space to accommodate said entourage as well as a double wide book open to the recipe. Just click on the photo. Zoom to 100%. Yes, that's about how big it is. Print it out, hot glue gun it to your bathtub, then try to put that on your countertop to cook from it. 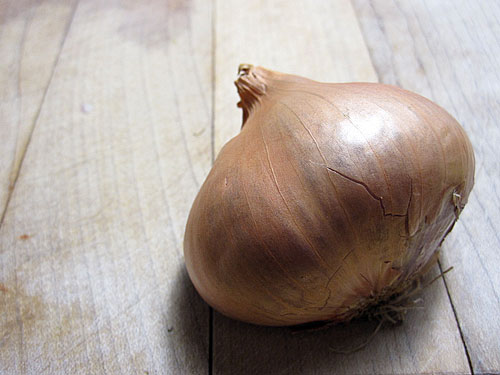 I was endeared to the use of the oft-wasted tough core of the cauliflower. "Oh, that TKells," I thought. "He doesn't like to waste. He must be Korean on the inside."

Then the rest of the recipe followed and I had to softly wonder, "WHAT THE FOCK?" You need: a cutting board, a knife, a paring knife, a food processor AND a blender (both?!), a saucepan, a large bowl, a slotted spoon, a grater (it's not stated in the recipe, but I highly doubt that TKells expects you to buy a canister of grated cheese), a gratin dish and a metal skewer. This does not even include basic things you have to use in cooking anything, like measuring cups, spoons, bowls, and couple of ritalin.

I didn't have a metal skewer. I have a gawdammed digital kitchen scale, but you don't need one for this recipe. Come on, it's just a cauliflower gratin.

You also have to turn on your stove top, the oven AND the broiler.

All this for four servings of cauliflower mixed with cheese and breadcrumbs. 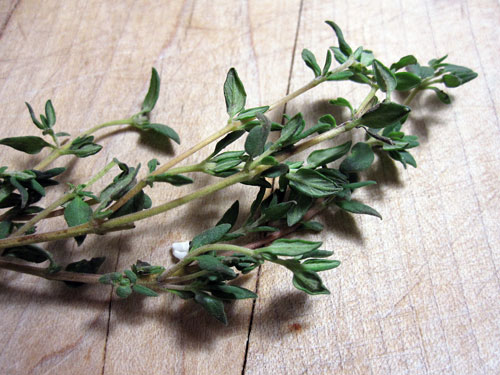 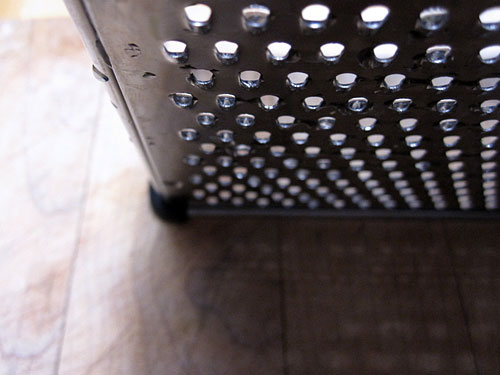 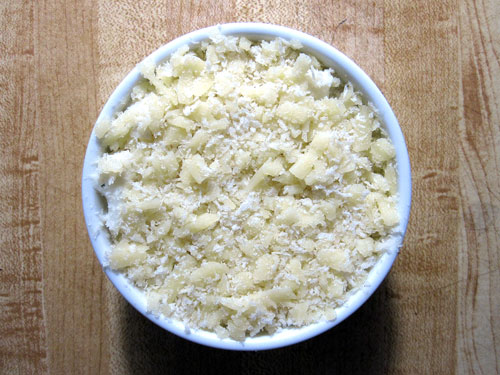 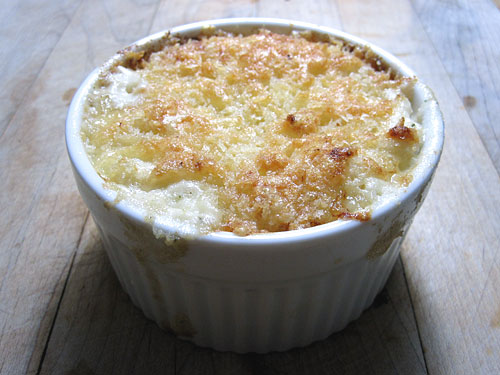 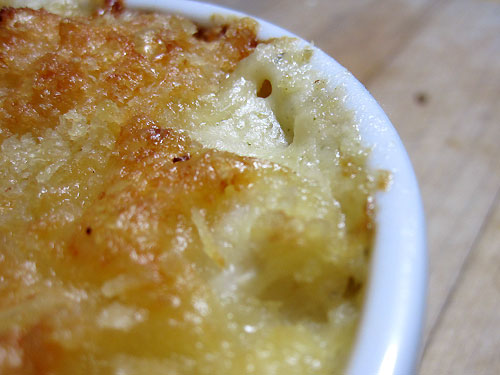 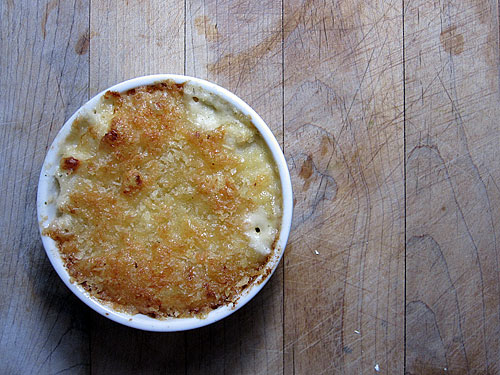 from the Bouchon Cookbook by Thomas Keller

Remove and discard the green leaves from the cauliflower. Cut away the florets, reserving the core. Cut off and reserve the stems. Cut the florets in pieces that measure about 1 inch. (You should have 4-5 cups florets.)

With a paring knife, cut away and discard the tough exterior of the core, then cut the core into small pieces and place them in a food processor, Add the reserved stem trimmings and pulse until very finely shopped, just short of a puree. (You should have about 1 cup; if you don't, puree enough of the florets to make 1 cup.)

Meanwhile, bring a large saucepan of water to boil. Season the water with salt and the vinegar. (The acid in the vinegar helps keep the cauliflower white.) Add half the cauliflower florets and blanch for 2 minutes. Remove with a strainer or slotted spoon, drain well, and place in large bowl. Repeat with the remaining florets: blanch, drain, and add to the bowl. Set the saucepan aside. Season the florets with salt to taste.

Add the cream, bring to a simmer, and simmer for 2 minutes. Remove from the heat and discard the thyme, bay leaf, and parsley. Pour the mixture into a blender and let it cool for 5 minutes.

Add the horseradish to the blender and pulse at the lowest speed to release the heat, then increase the speed and puree until smooth. Add the curry powder and blend at high speed for about 15 seconds. Toss the puree with the cauliflower florets adnd season with nutmeg, salt, and pepper to taste.

Transfer the cauliflower to an 8-inch round gratin dish or individual gratin dishes. The cream should come about halfway up the florets. Refrigerate for at least 30 minutes, or up to a day to allow the flavors to mature.

Sprinkle the gratin(s) with the cheese and breadcrumbs. Place in the oven to cook for about 15 minutes, or until it is bubbling and the center is warm. You can test it by inserting a metal skewer into the center of the gratin and touching it to your lower lip: it should feel hot. Remove the gratin(s) from the oven and turn the broiler on. Brown the top of the gratin(s) and serve.