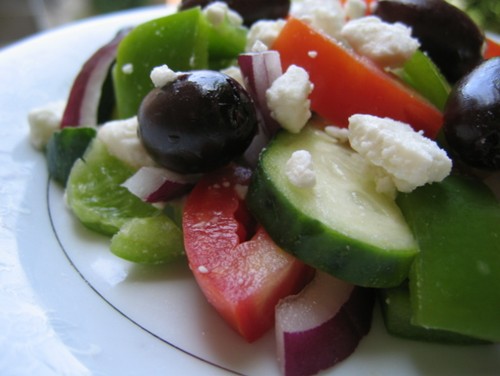 Today, I woke up and looked myself in the mirror with a newly critical eye, for that is what you do in the middle phases of the post-break mourning period. I examined every wrinkle, every sag, every lumpy bumpy “curve,” and asked myself, “Am I ready?”

I inhaled to puff up my chest, squared my shoulders, then threw them back.

Am I ready to face the summery, sunshiny world?

I rose up on the balls of my feet as if in high heels because it makes your legs look longer and leaner and your butt pops out in a pert little pouf.

Am I happy enough with what I see in the mirror today that I might actually shimmy into teeny tiny butt-fold-baring hotpants and a backless halter top, which means I would also go sans…underwire support?

I put my hands on my hips and tossed my head back to loosen the waves.

Am I ready to go out and face the sticky, sweaty summer sunshine…a little less covered?!?!

I twirled around, arms raised up, for the full perspective.

Are you fucking crazy?!?!

I don’t care how hot it is out there. I’m going to crank the a/c to a cool 68 degrees and slip right back into my navy blue Adidas sweatpants and men’s XL-shrunk-to-M Hanes beefy-T. I need to eat a few more salads.

And just like the internal dialogue I had with myself about what to wear today, I have the same kind of conversation in my head about salads. Salads are a very serious matter, and the opposing opinions in my head have battled each other all my life, sending me into a sick, twisted salad insanity.

On one side, I am a lustful, wanton glutton who sees a salad as nothing more than an easy vehicle for experiencing the cheap taste thrill of salad dressing. This is why I love Iceberg lettuce – a crisp, leafy blank canvas for thick, creamy buttermilk Ranch, fetid yet flavorful bleu cheese, lusciously sweet and spicy honey mustard. We simply have salads so that we don’t look like fools for slurping salad dressing out of a bowl with a spoon.

On the other side, I am a purist. I turn my nose up to salad dressing and lovingly caress the bare, unblemished flesh of fresh vegetables. It is blasphemy to drown Mother Nature’s handi-flavor-work in fattening, sour, salty, overpoweringly flavored spewage that is always laden with much too much sugar. You only use salad dressing as a sheepish cover-up for wilted, browned, underripe, flavorless vegetables that you plucked from a rotting death in the bottom of your crisper.

Do I dress? Or do I bare it all and go au naturel?

But ‘tis not merely a single battle. An entire salad war wages, and somewhere else in my brainwashed psyche, a salad is always based on leafy greens.

One side shakes its head. “You poor ignorant little fool, Merriam-Webster defines a salad as any cold preparation of raw vegetables. A salad of greens is for a novice.”

The other side retorts, “Cut it out with your education affectations. If you’re eating chopped, raw vegetables, you’re not eating a salad, you’re eating a bowl of mire poix.”

“And your greens are a garnish. Ha! And what of potato salad, hm? Potato salad doesn’t have lettuce, and yet, it is a salad.” Smug.

“Macaroni salad is called “salad,” too and that’s not even food!”

Then I sit back and ask myself…

Do not worry. I have already checked myself into the loony bin. 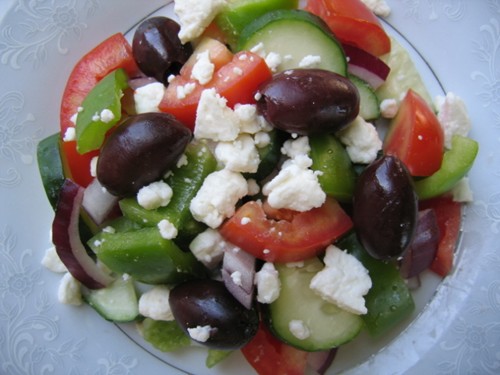 no lettuce, otherwise it's inspired

So I retreated into the basement, turned out the lights and escaped the airbattle waging overhead altogether by making a Greek salad, officially known as ????????? ??????. In case you studied the infinitely more useful Latin in high school instead of Greek, that translates to “horiatiki salata,” which is the official, authentic, traditional, technical Greek salad. The “greens” debate is moot because Greek salad does not have lettuce.

If you toss kalamata olives, tomatoes, cucumbers, bell peppers, red onions and Feta cheese in a bowl, splash it with olive oil, lemon juice, garlic, and oregano, it is a Greek salad. But. But! If you add lettuce, even if it’s Romaine lettuce, well 1) you’re getting crazy because Greeks and Romans are totally different, and b) it’s a Greek-inspired salad because it has Greek ingredients, but it is not a true Greek salad. I should know. I’ve never been to Greece but dammit if I’m not a wizard on The Internets.

However, I did not splash so much as a drop of lemon juice, not a single leaf of oregano, not one grain of salt nor pepper on my Greek salad because I felt like a purist today. I went naughty and left the salad totally, completely, utterly nekkid. The ingredients – red, ripe, fleshy tomatoes dripping with juice, taut, refreshing cucumbers, feisty onions and crisp, sweet bell peppers – needed absolutely nothing. Kalamata olives and Feta cheese provided just enough saltiness.

Chop into 1" pieces: 1 English hothouse, 2 Kirby or other cucumber that doesn’t have a wax-coating on the skin (wax is for candles), 2-3 ripe, but firm, tomatoes, and 1 bell pepper (red, green, or both). Add ½ thinly sliced red onion, a handful or more each of pitted Kalamata olives and crumbled Feta cheese.

I left my salad naked because either I was 1) lazy, 2) afraid of the fat calories in the olive oil, I don’t care how good olive oil is for your heart right now I only care about "getting over it" and my bikini, or 3) the vegetables were so fresh that they needed no help. You guess.

If you are the slightest bit self-conscious about what Mother Nature gave your vegetables, then go ahead and cover them up. Before I so boldly went au naturel, I used a Greek-ish vinaigrette.

Shake or stir together a 3:1 ratio of extra-virgin olive oil to freshly squozen lemon juice, 1 clove of very finely minced garlic, chopped fresh oregano, a dash of salt, and several solid turns on the pepper mill.

** a year ago today, there was flailing flesh and finger cymbals at koutoubia **