Welcome to your whole new world.

What You Need for Cilantro Lime Dressing

Do these ingredients look familiar? If you've been here a while and know about my absolute obsession with the Peruvian green sauce Aji Verde, you might think the two cilantro and lime-based sauces are the same thing because they have nearly the same list of ingredients and even have the same color. However, Aji Verde and Cilantro Lime Dressing have similar but not the exact same ingredients, and in different proportions.

Cilantro, green onions, garlic, jalapeño and lime are ubiquitous ingredients in Latin cuisines. Of course, they're also common garnishes in pho, the Vietnamese rice noodle soup, and I don't know how that geographical cuisine developed, but that's a master's dissertation for another day.

But You Hate Cilantro

Never in a million billion years would I have ever thought I would develop a recipe for Cilantro Lime dressing, let alone make it at least once a week and put it on any- and everything. I hate cilantro. Like HATE it. No, cilantro doesn't taste like dish soap to me. It tastes much much worse.

For some reason, cilantro doesn't stand out so aggressively vile in this dressing. There has to be something in the biophysical chemistry of blending entire bunches of cilantro, including their stems which are actually where the worst of the olfactory offense is, at very high speeds that render the previously foul flavor into one that's only subtly noxious. Kind of how anchovy sauce, kimchi, and blue cheese are.

It could of course, also be that the other very intensely fragrant ingredients like multiple cloves of raw garlic, fresh green onions, and nutritional yeast or cheese "tame" the flavor of the cilantro.

Whatever the science, it somehow works out to create Cilantro Lime Dressing, a bright green, garlicky, tart lime-spiked sauce. Drizzle it as a sauce over a burrito bowl. Stir it into scrambled eggs. Serve with chips. And of course, use it exactly like its name, tossed with fresh greens and vegetables for an incredible salad. Because there is up to one whole jalapeño blended into the dressing, it's also got a spicy kick.

One quick note: the Cilantro Lime Dressing as presented is plant-based/vegan, and is endlessly flexible with respect to substituting for other dietary preferences or in ingredients you may already have i.e. parmesan cheese, olive oil

Cilantro. The recipe is based on cilantro. If you have to substitute out cilantro because you don't like cilantro or don't have any, don't make this recipe. I used to pull the leaves completely off every stem, but at this point, there's no reason. You can use most of the stem except for the fibrous, bottom 2-inches.
Green Onions. Green onions have their own flavor, and you can use both the white and green parts of the stalk. If you don't have green onions in the kitchen or they don't look super fresh at the market, substitute any round white, yellow, or red onion.
Garlic. Use fresh garlic. Garlic powder and/or dehydrated garlic are too different in intensity for a dressing like this.
Jalapeño. I use half a very large jalapeño pepper for this recipe, and the dressing's intensity of heat just depends on how spicy the pepper is. You can substitute serrano pepper with the understanding that serranos, though smaller, are spicier. Proceed accordingly. If you want a pure Cilantro Lime Dressing with no spice, leave the jalapeño pepper out. If you like the flavor of pepper, use about ¼ of a small green bell pepper.
Lime. I use 2 whole limes, but limes vary in size, and how much lime juice they render. Aim to get about 4 tablespoons/ ¼ cup of juice
Nutritional yeast. I use nutritional yeast as a non-dairy substitute for parmesan and other salty, savory, umami-packed cheeses. If you don't have a preference for non-dairy, by all means use the regular dairy grated parmesan cheese.
Neutral flavored oil. I use avocado oil. It has a more neutral flavor than olive oil. However, if you already have olive oil, use that. Other neutral oils that work here are canola and grapeseed.

How to Make Cilantro Lime Dressing

There is nothing more than throwing all of the ingredients in a blender or food processor and let the machine do its work until the dressing is light, bright green with tiny specks of cilantro.

Order of Ingredients in Blender or Food Processor

Pro-tip for blending and food processing: There is an optimal order in which to add ingredients to a blender or food processor, so that you won't have to open the lid and push everything down with the handle of your wooden spoon. Trust me, I Iearned easily through research and the hard way through trial-and-error.

I used to trust my intellect and put the solid ingredients first, closest to the blade because I thought they took the longest to blend so they needed to be closest to the blades. I couldn't understand why it never seemed to work. I also had to take freshman physics three times before I passed so I think that explains a lot.

If you have neither a blender nor a food processor, it is absolutely possible to make Cilantro Lime Dressing by hand! It takes a little more time. Very finely mince the cilantro, garlic, green onions, and jalapeño, then combine with the remaining ingredients either by whisking in a bowl or shaking vigorously in a tightly lidded mason jar. The final dressing won't be quite as smooth, but all the flavors will still be there!

Other Green Dressings and Sauces

Once you've made this Cilantro Lime Dressing enough times, you can try a new green sauce! These are house favorites: 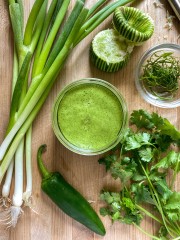 Cilantro Lime Dressing will keep in an air-tight container in the refrigerator for up to five days.