Home » blogging » Kimchee Bokkeum Bahp (Fried Rice), Cleaning Out, and How I Spent My Summer Vacation, Part 1 of TBD 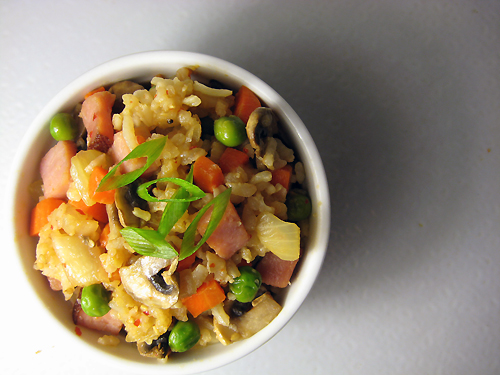 The memory has been stored in my mind, safe forever, like the last bit of kimchee in the dirty, cloudy jar at the back of the bottom shelf of the refrigerator.

And after sitting there all this time in my sick little psyche, it’s probably safe to say that the memory has fermented into just as fetid a gurgling, rotting mess as cabbage, pepper, and bacteria.

My Blood Runs Cold, My Memory...

He was laughing. Perhaps he thought it was actually funny. Or perhaps he was nervous that I might turn out to be some sort of freakish packrat cougar precougar who has trunks full of mix tapes and jean jackets with shoulder pads in the attic.

He was referring to a book in my bookshelf, and by the version number in the title, it was very clearly outdated. Not outdated in a charming, nostalgic, sentimental “this is my high school yearbook and I will probably look at page 134 again like I always do around this time of year to remind myself of what it was like to be a smart, PYT-in-my-own-mind cheerleader” way, but in a sad, clingy, melodramatic “10 year old textbook that is outdated before the class is even over because that’s how fast programming languages change” kind of way.

No. No, I don’t throw anything out.

“We’re going to have to change that. I don’t live like that,” he said, laughing again. This time I knew exactly what kind of laugh it was, but back then, I guess I just let myself ignore it.

Later, he would mention the CRT computer monitor in the corner of my bedroom, the stereo with dual cassette deck, the six bridesmaid dresses, my baby blanket “binkie,” each subsequent mention with increasing irritation.

I have kept so much more than I should, so much more than any sane person would. I am not sure why I hold onto things so tightly and for so long, but that is part of a long, twisted therapy session I award its own blog post about “abandonment issues” rooted in teenage years spent almost entirely in isolation. Sure, I've gotten rid of a few things here and there. I just have a particularly clingy attachment to products of my education – from books *ahem* to lecture notes to exam booklets to reports to essays. Particularly essays.

They are words that I have written and I guess I like to hold onto those.

Pintxo, my group’s business plan for an LA tapas restaurant at Anderson? In a D-ring binder, bottom shelf of bookcase.

Guns and Butter: The Perfect Recipe for Economic Growth, a term paper for my major at Cal? File cabinet, passenger side of my bed.

Sir Gatsby and the Green Light: A Thematic Comparison of The Great Gatsby and Sir Gawain and the Green Knight from 11th grade English? File box, top shelf, clothes closet. (I got an A. Obviously. Just the title alone…)

Every creative writing assignment from junior high? Every book report I ever wrote in elementary school, including the Call of the Wild report that my teacher read aloud in class and looking back now, I realize may be the single greatest academic achievement of my entire life?!

I kept them, still have them all, but there is one essay I do not have. Don’t be so quick to point that finger of inconsistent hypocrisy at me! I kept all *my* writings. I don’t have this one because I never wrote a “What I Did on My Summer Vacation” essay. (Did you really think I would have written such a glorious history at any time in my illustrious child- and early adulthood and at some point discarded it?!) Not sure why any of the many, many school systems in which I spent short, stability-reducing periods of time never made that a standard essay to ease students back into the classroom.

So, anyway, I’m writing it now.

How I Spent My Summer Fake-ation

Of course, I realize that it is technically no longer summer in LA. It is, however, summer somewhere, some-southern-hemispherical-where...where they’re eating panzanella. Let’s also be real. Realistically, it is year-round summer in LA, save that one day in late January when it is 50 degrees during the daytime.

Okay, sprinkles. And even "when it sprinkles," that’s just cupcakes, because let’s really be real now. There is no precipitation in this urban desert that is LA.

But! I am reserving those precious thoughts of LA weather for a future post entitled “Eternal Flaming Fountain of Youth Syndrome,” and return to the lecture at hand, which is “How Sarah Spent 2009 Summer Fake-ation.”

Posts about these somewhat notable events are sure to come. Maybe. At the very least, I’ve got to write about the adventure that was jury duty. I almost got arrested at the Airport Courthouse. It involved Tapatio.

...My Memory Has Just Been Sold. Or at Least Recycled.

Parallel to the stream of (surprisingly few) singular events of Summer 2009, there was that slightly erratic undercurrent of “regular life.” I spent time with family. I met a lot of people, made new friends, got reacquainted with old friends, for one is silver and the other gold…I cooked a little. I dined out a lot. I worked harder than I’ve ever worked in my life.

And I threw out a lot of “things.”

The first pass was through my clothes closet. Though it was easy to clean out, I almost destroyed my couture confidence when a secondhand store rejected the four foot high stack of semi-designer jeans as “not very stylish.” So, they were at least 10 years old. Have they never heard of “retro?!” But it hurt even more to hand over to Goodwill what was the equivalent of three thousand dollars-worth of denim when new.

The computer monitor was gone with the second rev a few weekends later, which included other electronics that I had to convince myself would never sell for more than a shipping cost on eBay. I balked at myself, “What do I mean no one will want this Palm Pilot? It was the top of the line…in 2001!”

It was difficult to let go, but I eventually tossed it onto the Out pile.

The third cycle started some time in late August with plastic trash bags and a paper shredder. I attacked every file cabinet in my house, sneezing through decade-old dust that lay like a protective trapper keeper cover over all my papers. I pulled out course syllabi, lecture notes, scantrons and shredded them semester at a time. I was the picture of textbook efficiency. Literally. I pulled every textbook out of the bookshelf and, well, okay, I couldn't do it. I slid most of them right back into their same spot on the shelf. I mean, what if I need to some day look up the Hotelling model?!

I don't trust this invisible "information highway" on the "internet."

The last wave was the hardest. No, not "was"; it is the hardest, as I am still in the midst of it, albeit crouching at the tail end of the slow, cathartic tornado that actually started months before I ever stumbled across a box of cell phones that bore the logo for LA Cellular (pre-cursor to Cingular, the precursor to ATT), then spun nearly out of control at just about the same time as that paper purge. I shredded photographs, destroyed videos, and threw away almost every physical thing associated a relationship that took three months to end last summer, and eventually, yes, finally, a year to forgive.

"Things" are easy to discard. Things with some memory attached to them are not as easy. The memories themselves, impossible.

The memory will always stay with me. I never forget. Memories are eternal. It's the unresolved emotions, the festering feelings, the leftover hurt haunting my head and all the other little chopped up pieces of my heart from that I finally pulled out of my life this summer and threw out.

But the HTML 4 book is still in my bookshelf. 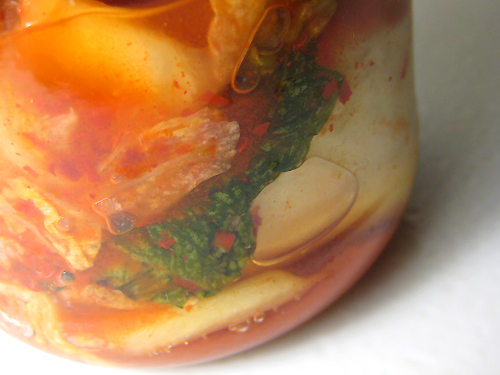 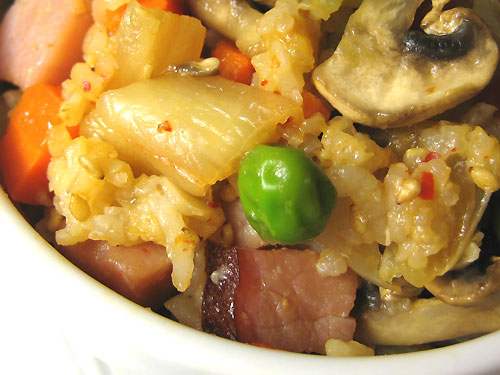 Though the whole point of kimchee is that it rots to the point of a food safety hazard, there may come a day when you have to "use it up" in order to free up that giant, near-empty jar's airspace in the refrigerator. There are a few ways - aside from the lazylicious way of just eating straight out of the jar with and extra long pair of chopsticks - like kimchee jjigae, but Kimchee Bokkeum Bahp, or fried rice, aka the universal sign for "Asian leftovers," has the added benefit of using up any and all leftover vegetables and meat that may be teetering on the edge of compost in your refrigerator.

In a large frying pan or wok, heat ~ 1 tablespoon butter over medium heat. Add chopped kimchee and saute until kimchee is cooked and looks (but isn't actualy) "crisp" on the edges. Set cooked kimchee aside.

Heat another ~ 2-3 tablespoons of butter. Add garlic, onions, and green onions. Cook until soft. Add other chopped vegetables and cook until soft.

Add cooked kimchee and leftover rice to pan. Pour egg on top, and stir fry gently but quickly to combine rice with kimchee and vegetables, coat the rice with egg, and heat rice through.

At some point during stir frying, add the soy sauce. Just before removing from heat, drizzle once with sesame oil and sprinkle with sesame seeds. 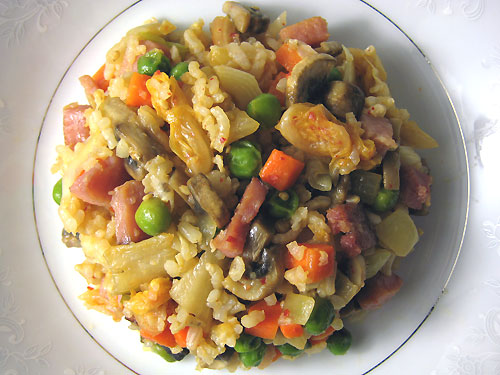 ~ Mattatouille uses butter in his version
~ Food and Wine has a very simple recipe from Julia Yoon, who runs Seoul on Wheels Korean Food Truck in SF
~ Maangchi includes a recipe for bulgogi
~ in the Japanese "chahan" style, eggs and rice are combined first (more similar to how my Mom does it)
~ one word: bacon. ok, two words: bacon + spam at TastyMealsAtHome