Home » cooking » Kiwi Sorbet - As Green as I Get Because I'm Not Really Eco-Conscious. I'm Just Cheap 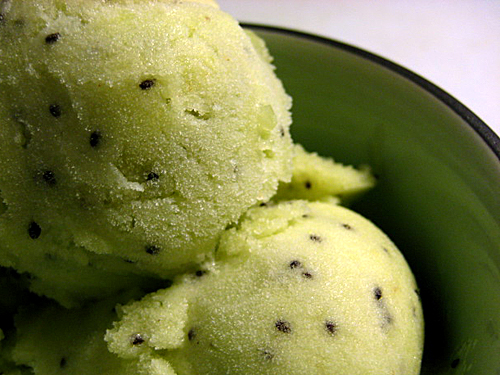 There's a risk of getting lynch mobbed. At the very least, I'll be excommunicated, but I'm going to take the digital risk anyway and just admit it.

I am absolutely not environmentally conscientious in any way.

Some of the things I do may belie such an ugly confession.  I recycle. I shop at local farmers' markets. I turn off the CFL lights in my house and refuse to run the A/C. I use bamboo kitchenware, carpool, and personally conserve water. These are all the same small steps other people take to "live green(ly)."

However, I don't do these things because I've chosen to embrace a green lifestyle. My motivations are not so noble. I separate glass, plastic and aluminum because those bright blue bins branded with a triangle logo are the only alternative in front me and re-print on the back of paper because it postpones a trip to Staples. I stroll through the local Farmers’ Market because it's only two blocks away. I ban A/C and use compact fluorescent lightbulbs because they drastically reduce my DWP bill. I use bamboo cutting boards because they’re both sturdy and pretty. I carpool because I hate driving and I conserve water because I hate showering uh I can't remember to water my cactus um, Brita filters last longer than a 24-pack of Evian bottles.

It's all by accident. Or in other words... 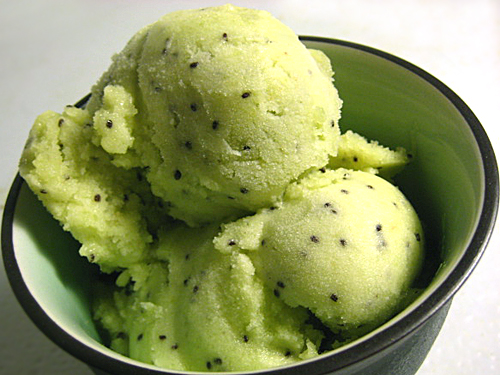 The reality is, even if I didn't out myself above of Le Gran Green Charade, there are a few other lazy, selfish and cheap things I do and lot of things I don't do that are so obviously not green, they'd prove me a hypocrite faster than driving my non-hybrid car one block to the post office to mail hard-copies printed on 100% pre-consumer paper.  And even if by some crazy economical alignment of the planetery ecosystems, I decided to dress in sustainable fabrics, drive fuel-efficient cars and do all that other eco-conscious stuff because they were quantitatively proven to reduce-reuse-recycle my personal bottom line, thereby putting the eco in economical, I'd still only ever be three-quarters of the way there because of food.

No matter what the savings, some certain foods will make me the human equivalent of a Hummer. 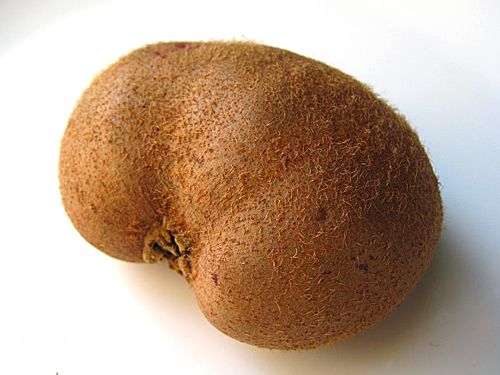 It really has nothing to do with the oftentimes prohibitive cost of "organics." There is a health issue involved with organic foods, so I can be convinced to spend an extra $3 for berries that have escaped air bombing of cancer-causing pesticides. It has everything to do with buying  and consuming foods from outside SoCal, outside California, or even outside the US. Obviously, I don't go out of my way to buy strawberries from Mexico when the things practically grow wild along the freeway here. I just don't work myself into unnecessary frenzy over "eating local." 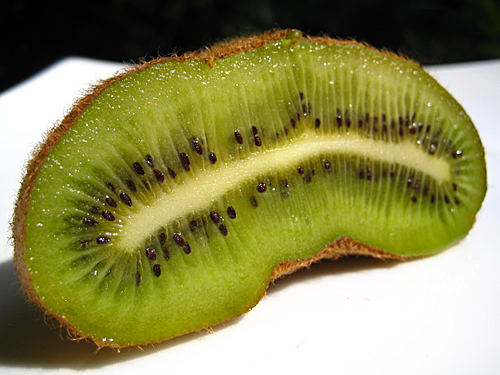 Eschewing "local" may seem odd for someone who lives in LA. Southern California has the widest variety of locally grown produce available year round and local waters are teeming with fresh seafood, including luxuries like spot prawns and uni (sea urchin). We aren't far from some of the best wine producing regions in the US, and even have vineyards and wineries within city limits.

We can't always get everything, though, and this where the eco lifestyle always escapes me. If I vowed to eat locally, I'd never get bananas, pineapple, or mango. Sushi dinners would be devoid of all the sparkling fish that flies in from Japan making them almost pointless. If you were to vow to eat local, you'd never eat a California avocado, and who would ever be so cruel as to deny themselves the smooth seduction, the pure raw pleasure of an avocado?!

(Incidentally, there was once a banana plantation along California's Central Coast, but it has long since shut down, and a company called Purity is now trying to grow mangoes in the Coachella Valley. Dammit, they may negate this whole post someday.)

I admire and respect people who are so passionate about protecting the environment that they make conscious decisions about everything from their babies' organic cotton onesies with highly renewable bamboo buttons to sourcing every ingredient of their meals from their own backyard gardens. That kind of passion is rare in any lifestyle, and when it bubbles over to encouragement of others to try the same, that's marvelous. My passions lie elsewhere.

I made kiwi sorbet. I have no idea if the kiwis were organic (probably not, since I bought them at the mega super grocery store chain). They were probably grown in California, but I didn't check to make sure.

The sorbet was delicious. 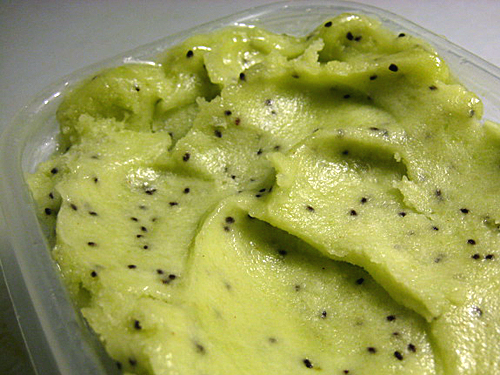 Bring 1 c. water and ½ c. sugar to a boil to make simple syrup. Remove from heat, stir until sugar is completely dissolved, then let cool.

Peel enough kiwis (about 6-7, depending on how big they are), chop, and puree in a food processor to make 2 c. puree.

Add syrup, kiwi puree, and 2 Tbsp. lemon juice to ice cream maker and freeze according to manufacturer's instructions, letting it churn until you get your desired consistency. I like mine, um, hard.

Who else had Kiwi Sorbet