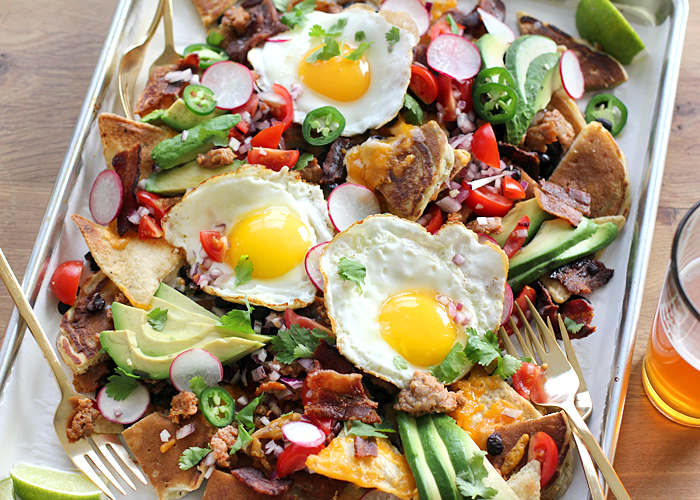 Contrary to popular belief, it is indeed possible to improve upon the perfection known as 'Breakfast Nachos' as we have known it so far. 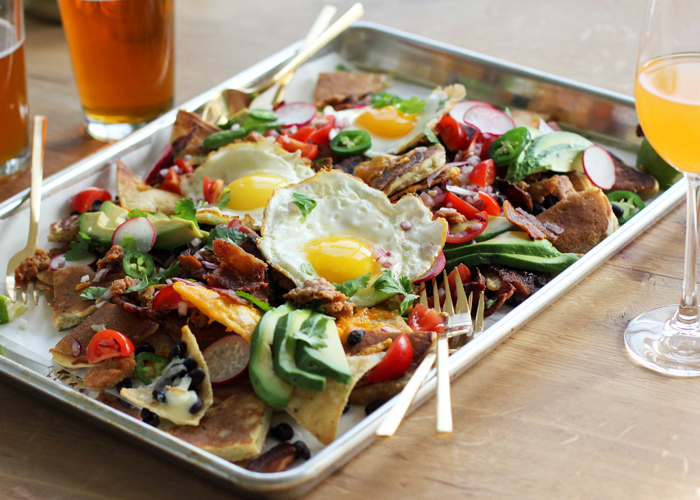 I have no idea how or why the inspiration rained down on me like acid-dipped nickels in a filthy third world strip club (Too much? Weird and inappropriate? Sorry. I haven't translated thoughts into complete sentences in a really long time). But it did, and months and months...

Okay, fine, more than a year later, inspiration has manifested itself as Pancake Breakfast Nachos with Bacon, Spicy Sausage, and Sunny Eggs.

Your tailgate party and any and all future hangovers will thank me. 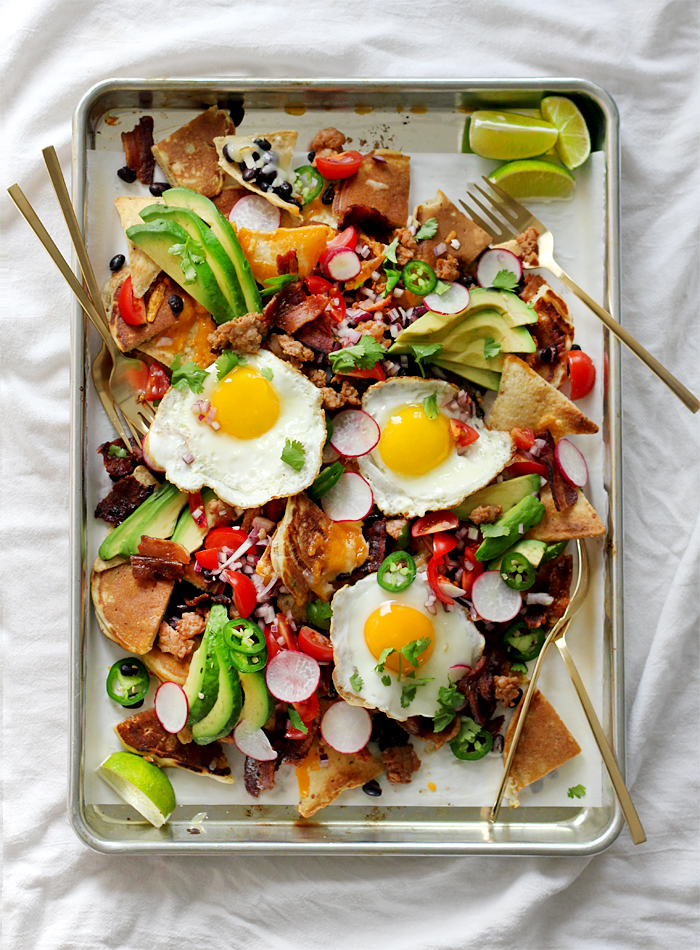 I hate myself for saying this, but nachos are more of a technique than a specific recipe.

(side note: Someone suggested "maple syrup?" since there are pancakes involved here, and though I do get that there is a sweet-plus-savory faction of people out there who drown their entire 2x2x2 breakfast plates with syrup, somewhat similar to the confused cult who puts ketchup on eggs, maple syrup seems a little much, don't you think? (asks the girl who just tossed pancakes onto a tray of nachos and parenthesized within parentheses so never mind, syrup, yes, whatever floats your little nacho boat).)

Turn on broiler in oven to high. Line an ovenproof baking sheet with parchment paper for easier cleanup.

Spread out a layer of tortilla chips mixed with the cut pancakes. Top chips and pancake quarters with shredded cheese.

(If you are using pre-cooked/leftover bacon and sausage, you can add to the nachos now so they warm as the cheese melts in the oven. Just be sure to watch closely so the cooked bacon and sausage don't cook so much more to the point of burning.)

Place sheet under broiler, about 6-8 inches from the heat. Watch carefully, and remove once the cheese has almost completely melted. It's okay if the chips get toasted on the tips. Ours took about 4 minutes.

While the chips and cheese are broiling, fry the eggs.

Remove the baking sheet from the oven. If you are using a separate serving plate, slide the chips/pancakes/melted cheese onto it.

Place the fried eggs on top.

Add pico de gallo, sliced avocado, jalapeños, radishes (and cilantro if you want to taint your plate of nachos with that stuff).