We weren't just talking about pancakes?

Oh. I guess that was just in my head.

Well, no. Never. I never return phone calls, in my head or otherwise, because I'm not a phone person. I hate talking on the phone. If you try to call me I'll just ignore you, and probably start resenting you for putting me in that position to begin with.

(Oooh hey. Sorry I haven't emailed you back! I thought I did. Because I did. But it was, um, in my head and...oh! Right. I guess you can't read the emails I write in my head.)

And I guess I have entire conversations about pancakes with you...in my head.

I do a lot of stuff in my head.

Which is basically my reality these days.

You start living inside your head.

And that's a dangerous thing.

Because it's fucking crazy in there.

So I guess we weren't speaking of pancakes.

We weren't speaking of pancakes, which means we weren't talking about how pancakes are the quintessential Group Food. Or maybe it's "pancakes is a group food," since "pancakes" by itself is a single thing, not really a plural form of the single "pancake," because there's no such thing as one pancake, except in the case of the First Pancake, which we've already decided isn't a pancake so much as it is a metaphor for birth order personalities. Pancakes is/are a Group Food because you never go to all the trouble of making pancakes for breakfast for just yourself. When it's just you, by yourself, in your coke-bottle-thick lensed glasses and shredded flannel pajamas eating breakfast at 2:15 in the afternoon, you eat a raw Pop Tart. Pancakes have increasing marginal returns, which means you never make just one pancake. You make a stack of pancakes. You make stacks and stacks. The more you make, the less effort it was overall to make.

Wow. I never fully understood this economic concept until now.

I was scarred for life. No more pancakes for boys.

So, where were we again? 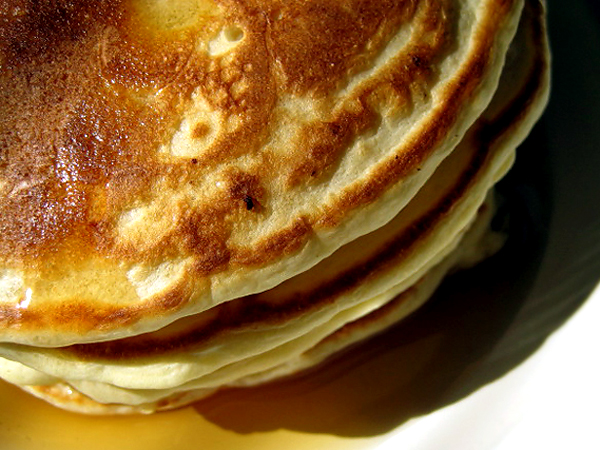 This is a recipe for easy, basic pancakes made with baking powder and plain milk.

servings totally depends on how big you make the pancakes

In a small bowl, whisk together flour, baking powder, and salt; set aside.

In a medium bowl, whisk together milk and sugar until sugar dissolves. Whisk in melted butter and egg.

Heat a large non-stick skillet or griddle over medium heat. Melt a pat of butter.

Spoon about 2 tablespoons of pancake batter onto melted butter, using spoon to spread batter into circle. Cook until surface of pancake is covered with bubbles and edges appear dry, about 1 minute. Flip pancake with a thin spatula, and cook until lightly golden brown on the bottom, about 30 seconds. (The pancake does most of its cooking on the first side.)

This was your first pancake. It wont be good. Toss it, or just eat it yourself in private.

Wipe the skillet or griddle down with a damp paper towel (to pick up any pancakes bits), then melt a small amount of butter to cook the rest of the pancakes in the same way as above, always wiping down the griddle between batches.

You can keep pancakes warm in a preheated 200ºF oven while you're cooking.