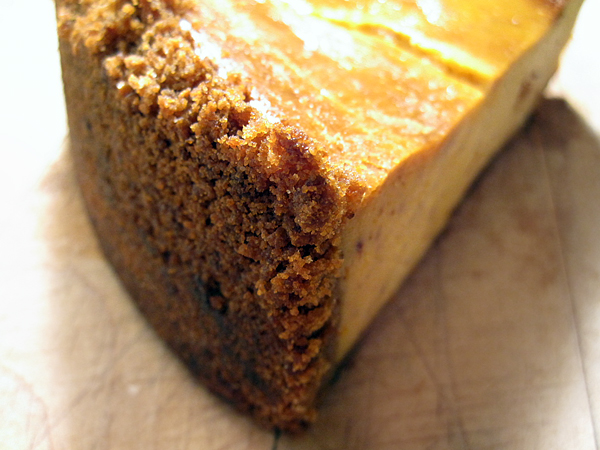 The problem starts with this thing I have with recipes that I call the "Ultimate" Complex. On the rare occasion when inspiration and motivation strike at the same time, I hurl myself at google and am suddenly assaulted with 1,070,000 results for cookies. Or candied ginger. Or pumpkin cheesecake. Or whatever it is I am about to bake, and I become overwhelmed with questions as I click through page after page of results. Why are there so many different recipes for the same thing? Why are so many of these "different" recipes the same? What is the difference? Which one is the best? Which one should I make? Whom should I trust?

Should I be using Bing?!

Scroll down for the Pumpkin Cheesecake recipe (and a spreadsheet)
...

I just don't know, I can't decide, and in some late night, wild-eyed craze, I end up quilting together what I believe to be the best components of several recipes in an effort to make "the ultimate" because I just don't trust any one single recipe. I don't know whether it's an issue of trust, control, perfectionism, or whether I'm confusing all of this with my dating life.

If I were a top chef, this scheme would probably work since I'd know what the hell I was doing. In fact, the Food Network used to have a show, Tyler's Ultimate, in which my darling Tyler jets around the world trying different variations of a dish like lasagne or apple pie. Back at home, he makes his "ultimate" version, and yes, it is usually pretty damn tasty looking. So is he, but that's a hot topic for another day.

However, the closest I've ever gotten to a chef is living with a roommate who did pastry for La Brea Bakery and Campanile. I am an absolute amateur, so when I try making "Sarah's Ultimate Anything," sometimes I get lucky and I surprise myself with an awesome quiche or ricotta gnocchi, but sometimes I end up with chocolate chip doorknobs. The good things are always cooked because cooking is made for on-the-fly adjustments by taste.

The bad things are always baked.

Herein lies a corollary problem that amplifies the Ultimate Complex. I have neither the exacting precision nor the patience when it comes to baking. Cooking is a liberal art. Baking is a mathematical science.

I don't like to measure. I don't like to level things off with a straight-edge. I'm too lazy to bend at the knees so I can look at the meniscus in the liquid measuring cup at eye-level. I don't like to count minutes or seconds to whip, beat, stir or whatever I'm supposed to do. I don't have the forethought to bring eggs, butter or cream cheese come to room temperature. I don't have the discipline to leave the oven door shut, the patience to let things properly cool before unleashing them from their pans, and I certainly don't have any desire to repeat the same experiment ad nauseum until we've proved the pudding.

The thing is, I want to be a baker.

I want my experiments in endo-/exothermic reactions to assay into perfect biochemical colonies of cakes and cookies, but I'm just not wired in that scientific that way. I set the curve in Shakespeare's England, but had to take Organic Chemistry twice, only passing the second time by the skin of my teeth. I have to accept that I am better at the cooking-by-feeling philosophy, the same way my parents had to accept the fact that there was no way I was going to get into medical school. My parents were a little disappointed back then, but eventually forgot about it when I told them they should give up on grandchildren from me. That one, however, they will never give up.

Given how inept I am at baking though, still I try because if there's one thing my parents can be proud of, it's a daughter who successfully fails at everything! 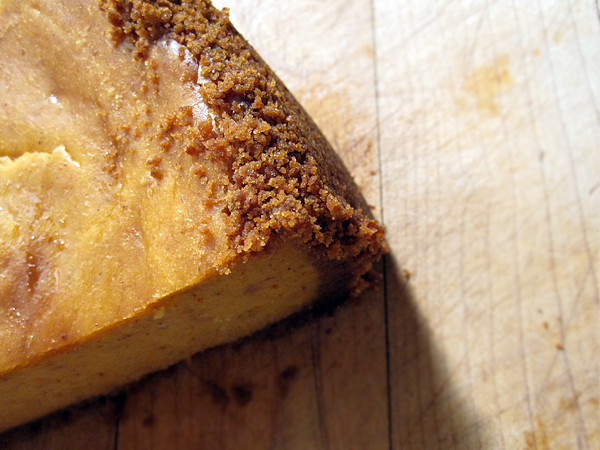 I had it in my mind to bake a pumpkin cheesecake for Thanksgiving, the perfect storm of culinary inspiration and motivation that happens every year. The good thing about cheesecakes is that while they are a little high maintenance because of the whole "let cream cheese come to room temperature," they are fairly forgiving when it comes to flavor modifications. I told myself that pumpkin cheesecake is something that could probably handle my Ultimate Complex, then spent a couple of hours researching pumpkin cheesecake recipes.

It was more like three hours. Four. Dammit, I spent upwards of five hours searching for recipes, researching recipes, comparing ingredients, contrasting techniques, calculating conversions, converting calculations and wondering why the hell I was inputting all of this into an Excel spreadsheet as if I were going to write some SuperMacro that would pop out a perfect pumpkin cheesecake recipe when I knew that in the end, I'd still be standing in the kitchen with my laptop precariously balanced on the edge of the counter, clicking among 11 firefox tabs on different recipes, hoping that Paula Deen's addition of sour cream is something that won't be missed when I click to Bon Appetit and leave it out, all the while wondering if I'm going to salmonella from the three, no four, raw eggs in the batter that I keep tasting for all spices.

Thank God that everyone bakes at 350.

My Pumpkin Cheesecake didn't come out too badly, and everyone in my family said they loved it. However, the cheesecake didn't have as much pumpkin flavor as I would have liked. I suspect I had pumpkin "palate fatigue" (thank you for the vocab, Thomas Keller) from all the batter. It also had brown spots and was cracked in places on top. If I were a real pastry scientist, I'd know exactly how much more pumpkin puree and spices to add next time to keep the cheesecake smooth. (See?)

But I was an econ major so I just cover it up with caramel.

(I'm a total psycho so I published out a portion of the Pumpkin Cheesecake recipe comp spreadsheet. It's also embedded in this post after the recipe.) 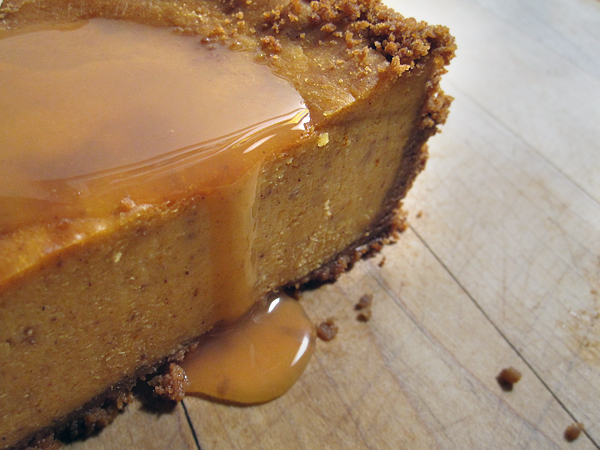 Combine graham cracker crumbs, sugar, and melted butter in a medium bowl. Pour into a 10” spring form pan and press buttered crumbs into the bottom and 1 ½” up sides of pan. Bake crust in preheated for about 10 minutes. Cool completely.

Beat softened cream cheese and brown sugar in large bowl just until combined, about 2 minutes. On mixer's low speed, mix in pumpkin puree, then eggs one at a time to endure that they are fully incorporated. Stir in spices, salt and vanilla.

Place pan with crust on a baking sheet (this will just make it easier to take in and out of oven). Pour filling into cooled crust.

Bake cheesecake for 1½ hours, or until filling is set.

Remove cheesecake from oven and carefully run a small, sharp knife around the edge of the cheesecake to loosen it from the sides of the pan. (Do not release the springform latch yet.) Cool 1 hour on countertop, then chill overnight in refrigerator.