For the first time in years, I went running...

Ok, only half of that statement is true.

The other half is kind of a total lie.

And I wish I could say that the first half, the part where I said "first time in years" was the lie and that the truth is I went running, you know, for the first time in days.

Unfortunately, the "first time in years" part is totally true!

Because really, it has been so many years since I've gone running that I literally can't even remember what decade it was when I last went running, at least, in running shoes. To exercise. And not to beat all the other fat foodies to be first in line for a bacon glazed, bacon fat fried bacon doughnut. With bacon.

*inhale* (which is what I normally do with bacon anyway)

I did not actually go running a couple of weeks ago.

I did, however, put on running shoes.

And that, my friends, is the first step. At least the first figurative step toward taking a literal step.

This may seem like a non-sequitur in the grand blog of things, but there is a purpose.

You just don't know what it is yet.

I don't either, but whatever.

See? There you go.

And while you may be thinking to yourself, among other things, "Did she not just say she does not eat breakfast?" I will respond to that by saying you used "not" twice in one sentence. Is that not a double non-negative?!

No, I don't eat breakfast. I also don't eat dessert. At least not at the normal appropriated times for either. And Coconut Quinoa Pudding is kind of breakfast because it looks like a common breakfast of oatmeal with fruit, and kind of dessert because it has the word "pudding" in it. But it is neither because I ate it at 3:00 in the afternoon, and it isn't the least bit sweet.

Going for a run now so I'll see you in a couple of hours!

(Only half of that statement is true.) 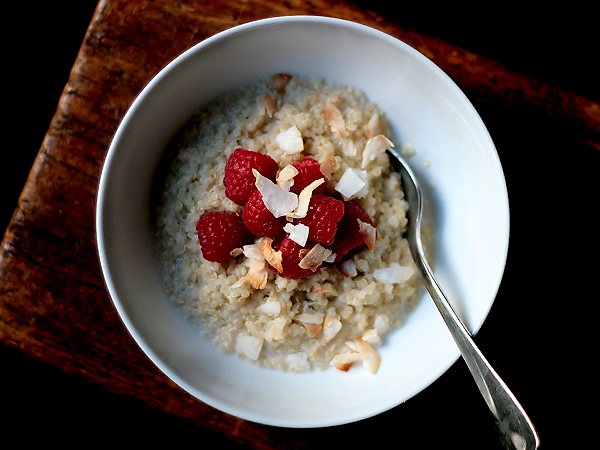 You can eat this pudding for breakfast or lunch or dinner or dessert, depending on how much you sweeten it. Which doesn't say much because if you've ever eaten cereal or a Pop-Tart, you've actually had dessert for breakfast, or for dinner if you ate it in the dark of your kitchen with a cold beer by yourself after you got home from work at 9 PM.

Pop-Tarts with beer may or may not be a true story.

makes enough for 4-6 servings depending on how much you eat, you fat foodie

1 cup quinoa, rinsed and drained
2 cups coconut milk, lite or regular, up to you (it's about 1 can plus a little more; use water to make up for the liquid if you don't want to open another whole can)
pinch of salt
your preferred sweetener (agave, cane sugar, honey, or nothing)
toasted coconut
fresh raspberries (or whatever fruit is fresh and in season)

Pour quinoa, coconut milk and salt into a heavy-ish pot.

Bring to a boil over medium-high heat. Turn down heat to low and simmer for about 20 minutes, or until quinoa is tender and the quinoa's "sprouts" have unfurled themselves from the grains. Stir the quinoa every few minutes and make sure the liquid doesn't completely evaporate. If it does, add a little bit of water (or more coconut milk if you have it).

Once the quinoa is cooked, remove the pot from heat.

If you are sweetening the pudding, stir in, starting with about two tablespoons, tasting and adding more sweetener to your taste. (I did not add any sweetener at all. Coconut milk isn't all that sweet, but something about the flavor "feels" sweet to me anyway.)

SOME OF THE PRODUCTS I USED:

(some of these are affiliate links so I make, like twelve cents if you click and go buy something!)