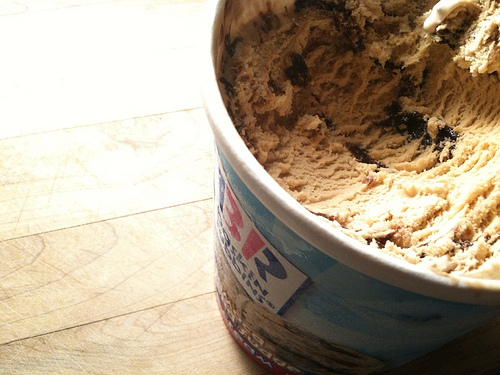 When we were little, our Dad insisted on "integrating" his children seamlessly into American society. Never mind that my sisters and I were born in the U.S.

Among efforts like naming our dog "Buffy" so that we would learn to pronounce the "f" sound which is non-existent in Korean, reminding us that "Americans" think kimchi is weird, and making us read books like John T. Molloy's Dress for Success in 2nd grade (not an exaggeration), we had a never-ending home curriculum of "American" linguistics. Dad would frequently use popular sayings and idioms to engrain them into tiny toddler heads.

Because a three year old stating that she would "never look a gift horse in the mouth" is totally American.

Dad would tell us that we could only go out for Baskin-Robbins ice cream "once in a blue moon." As with all the rest, we didn't care about the origin or the meaning of the idiom, just nodded our little heads, equating blue moons with the special occasion of getting, what was at the time, "luxury" ice cream. It never occurred to us, of course, to question blue moons happening about once a week for the Delicious family.

I have almost never heard anyone use the phrase since then.

There is an actual blue moon tonight, when a full moon appears a second time in the same month. The phenomenon only occurs every two to three years. And for a blue moon to occur on New Year's Eve? That hasn't happened in 20 years. What a very special way to close out the decade!

May every day of your life be an occasion to go out for ice cream.

p.s. We used to always get Jamoca Almond Fudge. I guess it never occurred to our parents that we were in elementary school, consuming caffeine. This probably explains my extraordinarily Napoleonic stature, innate addiction to caffeine, and extreme hyperactivity as an adult. Thanks, Mom and Dad!

p.p.s It's like this blog post was meant to be: Barack Obama used to work at Baskin-Robbins.