And how did it happen so fast?

How did we
How did I let it
Get this far?
Get to this point?
Get beyond repair?

What did I do wrong? What should I have done right? Why didn't I do this or that or something else differently?

Why didn't I see it coming? When did it all turn?

Was I expecting too much? Did I not meet your expectation?

Did we not try hard enough? Can we try harder?

These questions. There are no answers. They are all wrong and they are all right and

And yet it matters so much more than anything ever did or ever will again. 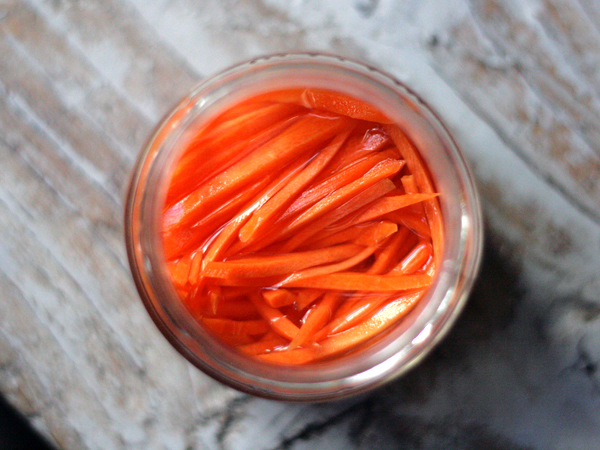 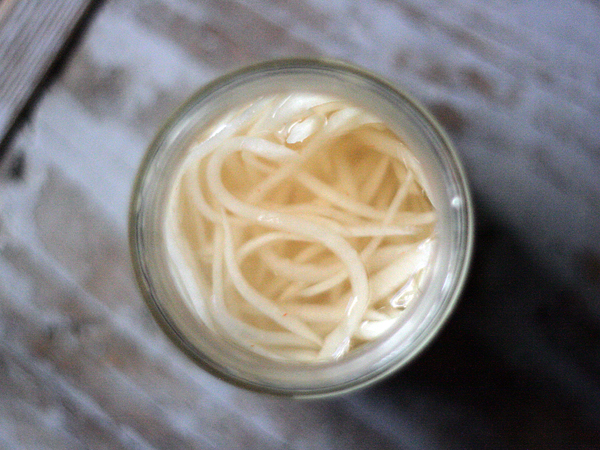 Like some relationships, there is nothing you can actively do to really fuck up vinegar-pickled carrot and daikon. You set it up, but you just let it happen naturally. If it works, it works.

If it doesn't, throw it out and start over.

I make these and put them on just about everything. They are perfect for bibimbap, or even just a bowl of steamed brown rice/quinoa. I also eat them straight out of the jar with chopsticks.

makes however much carrot and daikon you cut and julienne, though it makes 1 quart of brine

for the Vinegar Pickling Brine:

Combine water, vinegar, sugar and salt in a mixing bowl and stir until sugar dissolves.

Pack prepared vegetables into two separate quart containers. Split the brine between the two containers, pouring the brine over the vegetables. Cover and refrigerate.

After 1 day, they'll be good; after 2 days. they'll be perfect; and they'll keep for weeks after that.

But you probably shouldn't let it get that far.