Where has Koreatown been all my life?!

Between the gradual geo-shift eastward over the last few years from the wonder white westside bubble I'd been living in for the previous fifteen, my boyfriend's insistence that Asian foods must be healthier than all the pasta, pizza, buttered bread, 40-ounce steaks and pancetta-wrapped lardo we've been eating since we started dating because look at all us skinny-ass Asian people, and I suppose just boredom, we've been more frequently extending beyond our very tight radius for food. We've ventured into downtown LA a few times together: Alma when it opened, Bryan Ng's Spice Table, and The Parish for a wine event. Granted, we have not yet gone back to any of those specifically, which might be more a function of the restaurants themselves rather than downtown LA, but the subject of new, non-ethnic downtown LA dining is weighty enough to deserve its own post.

We have talked about trying any of the various ramen, shabu shabu and sushi restaurants in Little Tokyo, but not actually gone. How not-going is an achievement may not be obvious to you, but for us, merely entertaining the idea of going downtown for 90 seconds then eventually dismissing it is a big step up from previously never thinking about it in the first place because we have versions -- albeit horrible versions -- of all of that, within two miles of us.

And of course, there is Koreatown, which is closer to us, in both drive-time and taste preference. So far, we have only gone to two restaurants in Koreatown this year. One restaurant makes up 90% of our total visits to Koreatown, but like I said, this, for us, is an achievement.

The other restaurant is OB Bear, which isn't exactly a restaurant restaurant. It is the Korean version of what a non-Korean gastropub is trying to be. In other words, OB Bear actually IS a gastropub, a place not necessarily lauded for its cuisine, or for anything else for that matter. It's just a place to go to hang out and drink, that serves food on the side either 1) to comply with some sort of license to continue serving alcohol to patrons who are already sufficiently buzzed from the three other places they were drinking previously, or 2) to make sure those patrons eat something, anything, to counteract some of that alcohol before they head back out, pink and glowing, into the wild, wild Western Avenue to sing, dance or whatever. Not that I would know anything about any of that since the last time I went out out in "K-town" was 1997 which is essentially, never.

So obviously we ate dinner and drank water. 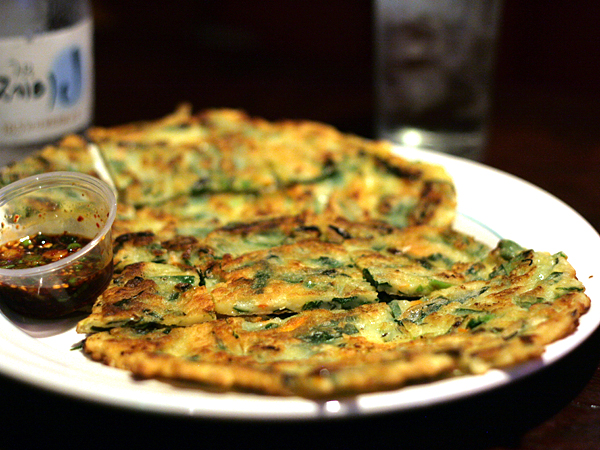 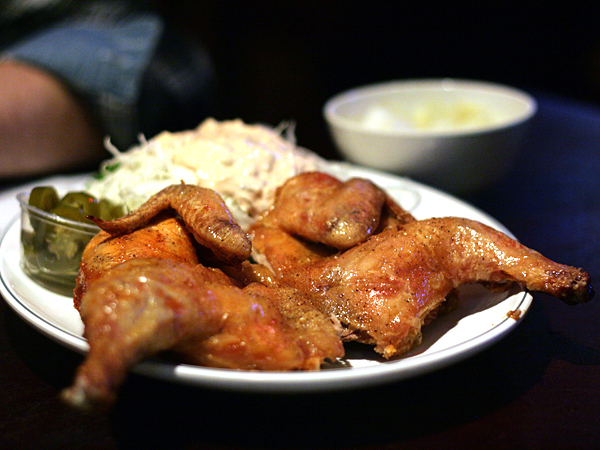