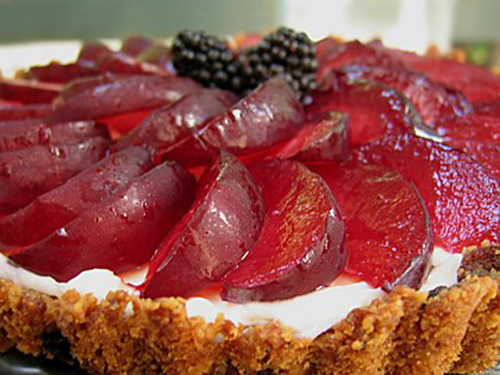 There was a time in my life when I used to love the Food Network so much that the moment I walked in the door every evening after a long day at work, I snatched up the remote control that had been left by the door on my way out earlier that morning, extended my arm toward the living room, and turned on the TV while leaning over to drop my bag on the ground and undo the straps on my shoes. I was listening to Alton Brown explain the differences between ground chuck and ground sirloin before my strappy sandals were in a tiny tangled heap on the floor.

I didn’t even have to turn the channel, just press the “Power” button, because the TV was already programmed to the Food Network from the same routine the night before. I would leave the Food Network on all evening until I went to sleep. Sometimes I would wake up at 3 am and catch five-year-old episodes of Molto Mario or The Naked Chef. On the West Coast, the regular programming doesn’t start again until 9 am, but I would still turn the set on in hopes that perhaps the FN executives had decided to start a couple of hours early. They never did.

I wasn't always watching very carefully what was happening on the screen, and sometimes, I wasn’t paying attention at all. The sound would be muted while I opened my mail, checked personal email, cooked my own dinner, and even flipped through the most recent issue of Bon Appetit. I left the tv on because it was comforting to know that I could look up in my silent, solo existence and know that someone inside the little flickering box in my living room was there, cooking something delicious.

I didn’t just love the Food Network, I was addicted.

It’s difficult to say whether my sick little addiction was a true love for the Network, whether turning on the tv every day without fail was simply habit, or whether having people on the screen was my pathetic, desperate attempt at “socializing,” no matter how one-sided and weird that socializing was. Perhaps it was a little of all three. Back then, I actually liked watching Emeril Lagasse, though I have to admit that I was watching his old show, The Essence of Emeril, in which a younger, thinner, fuller-hair-headed Emeril was somewhat awkwardly, but very earnestly, cooking something. In the very early days of Emeril Live, I thought "Bam!" was sort of endearing. After hearing it 15 times in every show, it got a little more than annoying.

The Food Network was slowly transforming, and though I knew in my head that I didn’t approve of everything I was seeing, I allowed my heart to make excuses for the sake of my addiction. Maybe society’s tastes are changing. Maybe the demographics of the Network’s audience are changing. The Network itself has to change to keep up with the demands of this newer, younger breed of food tv addicts. Change is a good thing and I should know how to adjust to change, right?

I have come to accept that the Food Network was a very bad habit that no longer gives me the same kind of high that it used to. It was long painful process to come to this point of admission, being repeatedly hit over the head with “Yum-o!” until it hurt, retreating, then going back and getting hit again with “How cool is that?” about 9,748 times in 30 minutes.

The days of keeping the TV turned to the Food Network for hours on end have long been over. With the exception of a few of my personal favorites like Alton Brown, Michael Chiarello, Ina Garten, and Paula Deen, I can hardly stand to watch the personalities fill up the screen with almost nothing but their overly perky, overtly sexy, disgustingly enthusiastic, though highly disingenuous, personalities. For a long time, I couldn't quite place my finger on exactly why I wasn't in love with the Food Network anymore. Sure, I was hurt when they decided to cancel the original Iron Chef. Sure, I am not fond of the "new breed" of celebrity chefs that have ousted my long-time favorites like Sara Moulton and Ming Tsai (and what on earth ever happened to Jamie Oliver, Tony Bourdain, and Two Fat Ladies?!?!) But I knew there was something deeper. I knew there was something broader about the "new" Food Network that bothered me.

Crumble the oatmeal cookies as finely as possible, without going to the effort of hauling any electrical appliance out of storage, endangering you or your 5 lb. chihuahua. Really, if you go so far as to use a food processor, you may as well bake the cookies yourself.

Stir the cookie crumbs with 2 Tbsp melted butter, using more if the crumbs are too dry. Press buttered crumbs (good God, does that sound delicious) into the bottom and sides of a tart pan. You can "set" the tart crust by baking it a 350 oven for ~15 minutes, but then you defeat the purpose of quarter-homemade.

Thoroughly stir sugar, softened cream cheese and vanilla (if you're using it) together. Spread into tart crust.

Slice plums into wedges that are ~½-inch on the thick side of the wedge. Cover the cream cheese filling with the plums.

Serve immediately or else the plums (if they're ripe, which they should be) will weep their burgundy blood all over the cream cheese. The cookie crust is also very "crumbly" so don't expect to make pretty slices.